Is Irish banking sector getting slowly better - as numerous articles, including in the Irish Times are suggesting on the back of the Central Bank data for September, or is it getting worse slower?

Consider CBofI data for 18 banks, plus numerous credit unions operating in Ireland. In this post we shall cover the entire domestic group of banks, with IRL6 guaranteed domestic banks to be covered in the follow up post.

The first metric by which our banking system is allegedly doing much better now days is deposits. Apparently, in recent month the flight of deposits from Ireland has been reversed. Charts below illustrate: 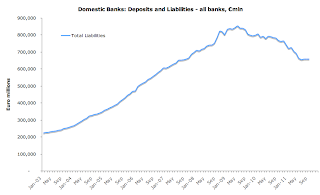 So deposits then. Shall we start at private sector deposits? 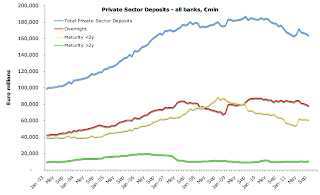 This shrinking is captured by declines in overnight deposits and deposits with maturity of less than 2 years. Deposits with maturity over 2 years have increased from €10,843mln in August to €10,946mln in September, marking second consecutive monthly increase, this time around - by a whooping 0.12%. Yes, that's right, the first time we discover anything of an increase is in the smallest sub-component of deposits and that is a massive 0.12%.

Yet, we keep hearing about increases in deposits. So let's take a look at all deposits in the system across all banks operating in Ireland: 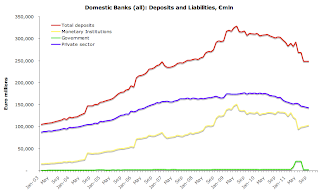 Chart above provides breakdown of all deposits in the system. This shows:


What explained this miracle of rising deposits in the system? Was it private sector (productive economy) newly discovered riches or restored confidence in Irish banking system by corporations & households? Nope, remember - private deposits are down, so the increases are broken down into:

Now, recall that the other metric of health of the banking sector is the Loans to Deposits ratio - the metric of solvency of the system. Recall that the Central Bank of Ireland is aiming for 125.5% ratio for IRL6 banks (more on these in the next post). So what's happening in this area? Chart below illustrates: 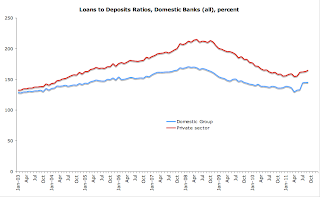 And, folks, we thus have:

So in summary - there are no signs that things are improving or stabilizing in the broader banking sector in Ireland. The following post will look into IRL6 guaranteed institutions, but as the whole banking system goes, no confidence gained, private sector deposits are continuing to contract, LTD ratio is rising for private sector and the only area of improvement is the inter-bank deposits, which means close to diddly nothing to the economy at large.
Posted by TrueEconomics at 9:16 PM