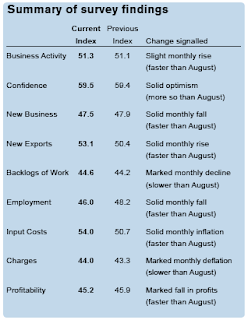 Overall Services PMI rose from 51.1 in August to 51.3 in September - both the increase and the level above 50 are statistically insignificant, but welcome, nonetheless. This marks ninth consecutive month with index reading above 50, although only in January and February did the rate of expansion rise statistically above zero. 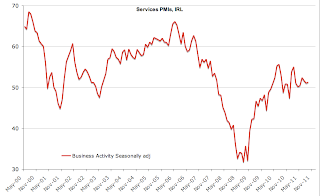 The rise in overall activity was recorded in spite of a drop in overall new business from 47.9 in August to 47.5 in September. New orders fell at a statistically significant pace that was the fastest since December 2010. Per NCB statement: "Anecdotal evidence pointed to weakening economic conditions, and a related drop in client confidence." 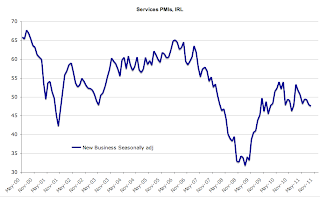 The widening gap between new business activity and PMI core activity reading is now present in 10 of the last 12 months: 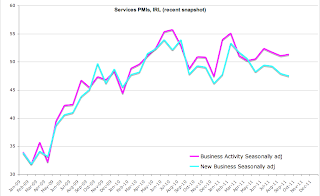 Confidence levels remained well in the expansion territory at 59.5 in September, virtually unchanged on August reading of 59.4. It is worth noting that confidence reading has no statistically significant bearing on actual activity as I have shown in previous research. Overall, per NCB release: "Respondents to the survey remained optimistic that activity will be higher in 12 months’ time than current levels, although the level of positive sentiment was largely unchanged from the muted
level seen in August. Growth of external demand was reportedly a factor behind the latest optimism." The reason for the use of the word 'muted' is that confidence levels readings stood above 60 in all months between December 2010 and July 2011 with the year-to-date average reading of 63.0 and Q3 reading of 60.3. 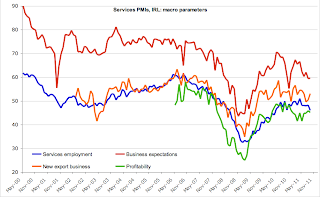 In contrast to the trend seen for total new business, new export orders rose in September to 53.1 from 50.4 in August - a statistically significant increase. With new business from abroad now rising in eight of the past nine months, the tenuous recovery in the sector is driven solely by exports (that and probably Nama, plus continuous reshuffling of chairs on the banking sector Titanic's decks). However, new exports orders expansion is still running below the longer term averages. Q2 2011 average was 54.0 against Q3 2011 average of 51.0 and year-to-date average is 53.3.

Services providers continued to cut the backlogs of work as slowdown in new orders hit and this was in line with previous months contractions.

Employment levels fell solidly, and at the fastest pace since April 2010 with Employment sub-index now at 46.0 against 48.2 in August. Employment in the sector has now been shrinking every month since March 2008 with exception of one month.

More on employment and profitability in both Manufacturing and Services in the subsequent post. Price movements in services between input costs and output prices continued to pressure profit margins in the sector: 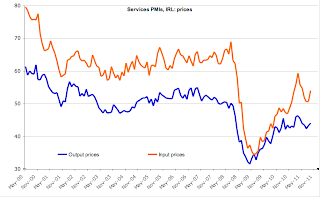 Posted by TrueEconomics at 8:34 AM