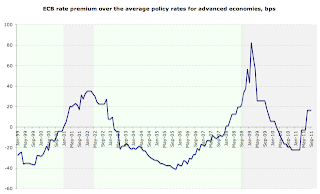 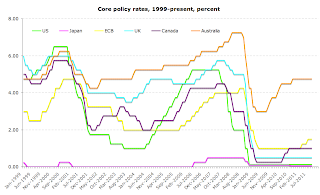 In fact, price stability at 2% target for HICP would require current ECB rates to be in the neighborhood of 2.5-2.75%.

And note from the second chart below - of all major central banks, ECB is the only one to have raised rates since November 2010.

Let me provide a quote from the economist I rarely agree with: "The bitter truth is that it’s looking more and more as if the euro system is doomed. And the even more bitter truth is that given the way that system has been performing, Europe might be better off if it collapses sooner rather than later." Paul Krugman (source: here)

Posted by TrueEconomics at 10:31 AM