With Exchequer results for September (see earlier posts on the details of tax returns and tax burden), here's the update on overall Exchequer deficit for nine months through September 2011. 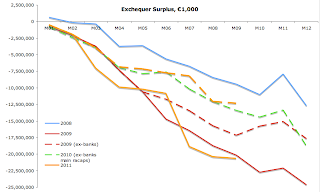 This hardly represents a significant drop in our overall fiscal imbalances. Cumulative deficits for 2008-present are now at €76.76bn or €42,146 per each employed person or €54,990 per each full-time employed person in Ireland (per Q2 2011 QNHS numbers, not counting Nama debts, Government promisory notes and interest on these soon to be due).

So a run-of-the-mill family of 2 full-time employed workers is now facing, on top of massive mortgage and Government-monopolized/regulated utilities and services bills, plus gargantuan costs of childcare, education, and health care, an additional debt pile of €109,000 on average, courtesy of the serial failure of the state to control its own spending habits.

As the 'Green Jersey' crowd would say: "It's all sustainable" cause 'exports will save us' and we have 'jobs programmes' alongside 'homes retrofitting'/'windmills-potential' economy. Sure...
Posted by TrueEconomics at 12:47 PM