Cheerful update today from the Eurostat on New Orders in Industrial Production series:

Here are the details: 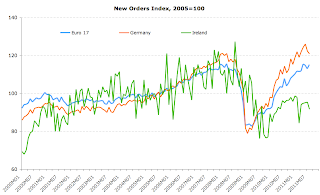 2008 average reading was 110.09, 2009 average was 86.99 and 2010 annual average was 102.2. So far - through August - 2011 average is 112.93 - not a bad result. But miracle it is not - reading of 100 is consistent with activity back in H1 2005, so in effect, through August 2011 we have achieved growth of 2.05% annualized in terms of volumes of output. Given that since then we had pretty hefty doses of inputs inflation and moderate gate prices inflation, the margins on the current activity have to be much lower than for pre-crisis years. Which means relatively robust improvements in volumes of industrial new orders are not necessarily implying robust value added growth in the sector. 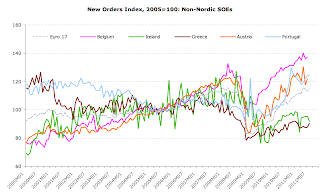 Of the big players: 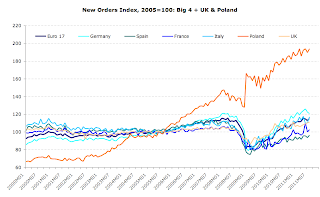 Other countries are illustrated below. 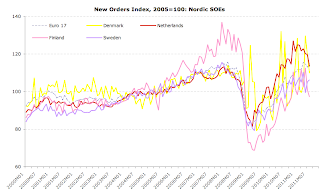 So on the net, industrial production new orders signal some bounce back from the troughs of the slowdown in early summer 2011, but this can be immaterial for the wider Euro area economic growth and a temporary improvement. September and October data will be more crucial, signaling into early 2012.

Posted by TrueEconomics at 3:49 PM