Irish PMIs for Manufacturing and Services, as well as their employment sub-components, are all continuing to signal lack of substantive recovery in the real economy. In the mean time, despite relatively strong confidence, profit margins are tanking across the main sectors. Here's the latest data: 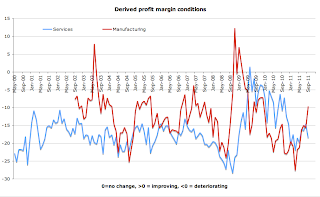 As margins usually translate into expansion, investment and, thus, employment, the above numbers are not encouraging...
Posted by TrueEconomics at 10:01 AM