Like a heavily Photoshopped version of Bill Gates can be expected to last, oh about a nanosecond in convincing the generation i-Apple of the need to buy Microsoft products, so did the interest rate’s junkies expectation that the ECB is about to drop rates to where Ben “The Helicopter” Bernanke has them proved to be short-lived.

Today’s decision  by the ECB not to alter the existent rates was both a shock to all those incapable of making a living in the real economy stagnated of cheap liquidity and to those who were expecting the ECB to miraculously discover some latent propensity to fuel inflation.

Yet, the decision was perfectly in line with ECB’s policies to-date. Worse, it was in-line with rational ECB policies to-date – the type of policies that should be predictable from the long-run perspective. ECB has held its nerve this time around. Here’s why.

Chart below shows the historical path relating ECB rates to the leading indicator for real growth in the euro area, eurocoin. 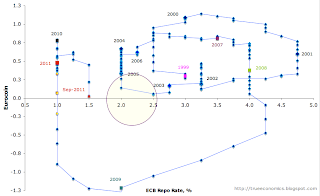 At the depth of the crisis back in 2009, rates consistent with the current eurocoin reading were justifiably lower than they are today because they were coming on the foot of severe contractions in economic activity from the tail end of 2008 and into 2009. In addition, monetary policy at the time was accommodative of growth recession, rather than of the banking and financial services crisis or the sovereign crisis. Today, the picture is different. While eurocoin has entered the period of signalling potential for renewed recessionary dynamics, the looming growth crisis is not underpinned by the change in economic fortunes for the euro area, but by a set of structural weaknesses (fiscal, banking and credit supply-related, depending on the specific country). Easy monetary policy can help, but it cannot restore the euro area economies to structural health. Instead, alleviating the pressure on growth through monetary tools can only delay the necessary adjustments in structural parameters. ECB is not about to do this and, perhaps, for a very good reason.

This means that the current leading indicators scenario should be compared not against 2008-2009 period, but against pre-crisis periods where eurocoin had also fallen to the current levels around zero. This is the period of December 2002-June 2003 and the underlying ECB repo rate at that time was around 2.5%. Get it? The policy-consistent move for ECB today would be from around 3% down to 2.5%, not from 1.5% to 1%. Given we are at 1.5%, the most consistent move would be to stay put. And this is what the ECB chose today.

By the way, in the long run, since eurocoin is the leading indicator of activity, there is a negative relationship between inflation and the growth projections it provides: higher growth signal into the future tends to coincide with lower inflationary pressures today. Or put differently, falling eurcocoin now is not necessarily a signal for well-anchored short-term inflationary expectations, something that coincides with the stated ECB concern expressed in today's statement.

Of course, ECB targets are set based on inflation, not leading growth indicators, although the two are strongly correlated with lags. Here, the same picture applies: 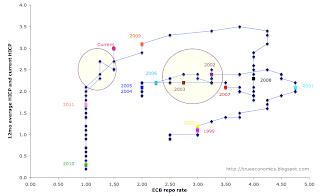 And the same logic holds. So based on inflationary dynamics, the ECB repo rate should be around 2.0% to 3.0% and falling from above 2% levels, but not below 1.75%. Given the starting position at 1.5%, a rational move would be to stay put.

No surprise, then in today's decision. It could have gone like 25:75 - with lower chance for an irrational knee-jerk rates lowering reaction on the foot of the immediate crisis, and higher chance of what has been delivered.

Perhaps the only disappointing bit to today's ECB call is that the central bank will continue supplying unlimited liquidity to the insolvent banking sector under unlimited 1mo lending extended through July 2012. Perhaps the ECB had no choice, but to do that. Or may be a better option would have been to start properly assessing the quality of collateral pledged by the banks at the discount window. That would have achieved two things - simultaneously - both being good in the long run for the euro area banking sector:
On top of that, ECB announced renewal of LTROs (12-mo and 13-mo) with delayed interest cover - in effect a heavy duty support for really stressed banks. Last time ECB did this was back in December 2009 and those operations were designed to shore up banks in the wake of the Lehman Bros bust.

Instead of applying some pressure on euro area's clownish 'leadership' in the banking sector, the ECB choose to call for some unspecified efforts by the banks to voluntarily shore up their balance sheets and retain earnings to provide cover for losses on their sovereign bonds exposures to weaker euro area countries. In the current climate, and with ECB providing unlimited liquidity, this is equivalent to suggesting that zombies should get out into the yard and work-off some of their rigor mortis. Good luck.

Posted by TrueEconomics at 2:57 PM

I believe that banking institutions are more dangerous to our liberties than standing armies. If the American people ever allow private banks to control the issue of their currency, first by inflation, then by deflation, the banks and corporations that will grow up around [the banks] will deprive the people of all property until their children wake-up homeless on the continent their fathers conquered. The issuing power should be taken from the banks and restored to the people, to whom it properly belongs. Thomas Jefferson - 3rd president of US (1743 - 1826)