Few posts back I looked at the latest data for Irish banking system stability from the CBofI. Here, I complete my analysis by focusing on 5 covered institutions or IRL 5 (previously known as IRL 6 before the merger of Anglo & INBS into IBRC). 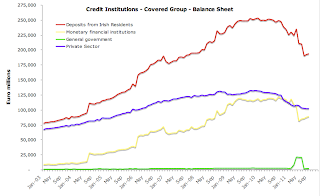 As mentioned above, borrowings from the euro system have gone up in September. In contrast, as shown in the chart below, total borrowing from the ECB & CBofI have declined slightly in September to €123,596mln from €124,379mln in August (a mom drop of 0.63%). Year on year, the borrowings are still up massive €28,572mln or 30.7%. Over the last 3 months (July-September), average borrowings from the euro system and CBofI declined 1.39% or €1,748mln compared to 3 months from April through June. 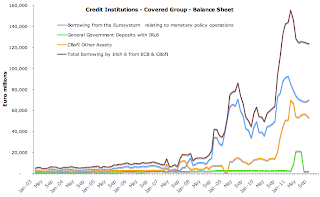 Loans to irish residents have contracted once again in September, reaching €294,224mln against August levels of €294,503. The declines were accounted by drops in loans to MFIs and increases in loans to the General Government (+€58mln) and Private Sector (+€95mln). hardly anything spectacular. 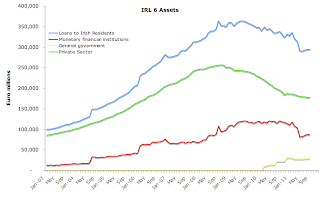 Now to the last bit - recall that the comprehensive reforms of the Irish banking sector envision deleveraging Irish banks to loans-deposits ratio of 125.5%. These targets were set in PCARs at the end of March 2011. back in march 2011, LTD ratios stood at 143.25% for all of the IRL6/IRL5 and 173.71% for private sector LTD ratio only. Since then, if anything was going up to the CBofI / Government plans, we should have seen at least some reductions in LTDs. 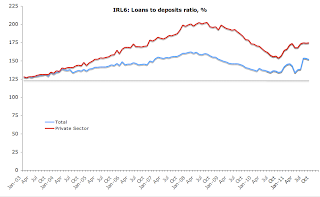 As chart above illustrates:


And the summary is: there's no real stabilization or improvement I can spot in the above for IRL5.

Posted by TrueEconomics at 10:48 PM