This is the first time I am covering a relatively new data set from the Nationwide UK (Ireland)/ ESRI Savings Index. The latest data is for August and the index shows that overall savings conditions in the country have fallen by six points in August to 105 "as divergent concerns temper attitudes towards saving". 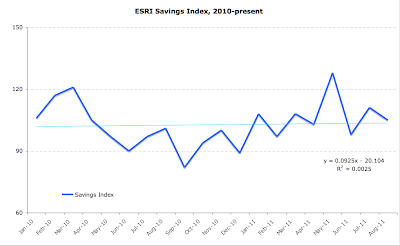 Overall, since January 2011, volatile series have posted relatively flat trend as shown above, contrasting the constant refrain that Irish consumers are saving too much.

Per ESRI release, "divergent attitudes of the over and under 50 age groups are apparent and driving the decline of the Savings Index in August."

Specifically: the Savings Attitude sub-index fell five points in August to 94, "primarily driven by the over 50 age group who showed a more negative attitude towards the amount that they are currently able to save." 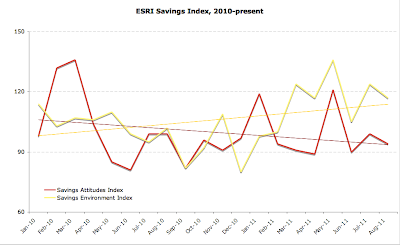 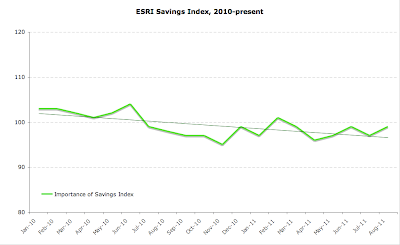 The Savings Environment sub-index also fell by seven points in August to 117. Significantly, 53% of under 50s believe that government policy is discouraging saving compared with 47% of over 50s.

In a commentary to the release, Brendan Synnott, Managing Director of Nationwide UK (Ireland) said (emphasis mine): “Those aged over 50, who are more likely to have accumulated savings, have a heightened concern about the impact of the wider economic environment on these hard earned resources. There is also obvious concern about potential future taxes on savings. Those aged under 50 seem to be under pressure from all sides, they are more likely to have to save regularly for things like children’s education or to make provision in the event of losing their jobs. These people need reassurance from government and more signs that things are at least stabilising, since it is still too early to think about an improvement in economic conditions.”

The precautionary motive for savings appears to remain the main driver, with the highest proportion of people surveyed, 41%, indicating that they are saving for unexpected expense with a further 12 % saving for education/training.

Debt overhang also remains prominent: "When asked what they would use any surplus funds for, 47% said they would pay off debts, including mortgages; 40% would save; only 7% would spend spare cash with a further 7% preferring to invest in a pension or shares."

As far as the 'vastness' of savings glut goes, it is nowhere to be seen. Per ESRI: "25% of consumers save between €51 and €100 a month while 24% save between €101 and €200 per month." Which means that 49% of those who save are saving less than 7.7% of the average annual income for those in employment - a rate of savings not sufficient to cover future pension needs, let alone offset potential unemployment spells, losses of earnings due to health issues, children education and other risk- and life-cycle- related expenses.

Overall, we can view savings environment as being divided into two components: actual conditions for savings today and perceptions/behavioral drivers for savings in the longer term. These are illustrated below. 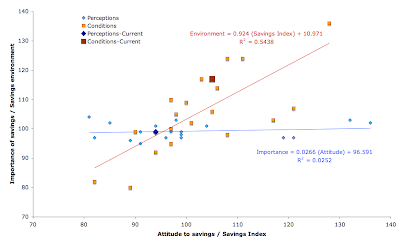 Given small number of observations, any conclusions have to be drawn very carefully, but overall it appears that current environment is relatively closely linked to current index reading, while attitude to savings has little to no relationship to overall stated importance of savings.

The former might suggest that when consumers perceive the need for larger savings, they do not necessarily tend to view savings as being more important to them. In other words, the need to save more is not positively correlated with overall need to save, which may highlight evidence of robust precautionary savings motive.

The latter suggests that higher savings are relatively strongly coincident with the conditions in favor of saving in the marketplace. Which can be related to the current state of Irish banking sector where state-subsidized banks are competing for deposits by offering abnormally elevated deposit returns.
Posted by TrueEconomics at 11:59 AM