Production for Manufacturing Industries for August 2011 surprised to the strong upside rising 11.4% higher on August 2010 (unadjusted basis) and 1.2% (seasonally adjusted) over three months from June through August, compared to 3 months prior to June. Industries volume of production rose 10.4% year on year in August, also a strong gain. Monthly increase in volume in Manufacturing (3.6%) was the strongest monthly gain recorded since 9.0% increase in September 2010, and 4.4% monthly gain in Industries was also the strongest since September 2010 monthly rise of 6.9%. 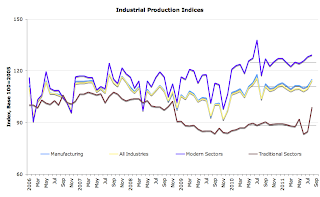 Manufacturing and Industry indices, as shown above, rose well above the shorter-term average. However, the core break out from the previously established pattern of volatility around the flat trend was in the Traditional Sectors. Specifically, Modern Sector volume of production expanded by 10.2% year on year and 0.9% monthly. These were the strongest yearly gains in the series since December 2010 and introduce a break from annual contractions posted in three months between May and July. Traditional Sectors posted a massive 16.7% jump in volume of production in monthly terms - the largest monthly gain on the record and 10.8% annual rate of growth - also the strongest growth on record. 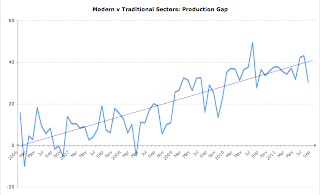 As the result, the gap between Modern and Traditional sectors activity by volume has closed substantially in August, from 43.3 in July to 30.3 in August posting the shallowest gap since August 2010. Again, as per chart above, both series now have broken well above their flat recent trend, although the breakout is consistent with volatility in the Q4 2010-Q2 2011.

In 3 months between June 2011 and August 2011, in year-on-year terms, the following notable gains and declines in volume activity were recorded in:

Posted by TrueEconomics at 9:36 PM