Tax receipts for September released yesterday show predictable evolution along the trend established in recent months - the trend of broadly matching the targets, but continuing to surprise on the downside in some core categories. In other words, no signs of recovery here, folks.

Here are the details.

Income tax came in at €9,254mln (this, of course, includes USC, rendering annual comparisons virtually meaningless). Compared to the target, Income tax receipts were up €147mln or 1.6%. Year on year Income tax came in at +25.7%, much of which is due to levies and USC, making multi-annual comparisons even less meaningful. Annual target for the category envisions an uplift of 25.3%yoy so we are slightly ahead of that for now. 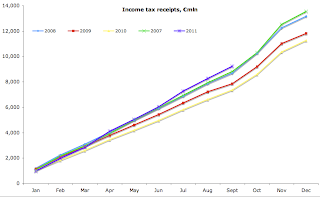 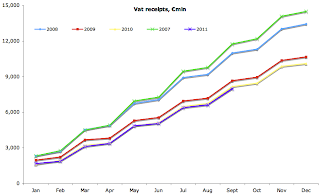 Corporation tax - the Big White Hope of the 'exports-led recovery' is below target at €2,054mln (do notice that Government's Great Hope is less than 1/4 of the income tax as far as contribution to the overall Exchequer balance goes). Target was €2,085mln, so the shortfall now stands at -1.5% or €31mln. Corporation tax performance through September 2011 is now at the worst levels in 2007-present period despite all the record activities in exporting sectors, which again puts the boot into the Government's claims that exports-led recovery will restore our economy to health. 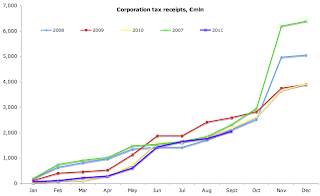 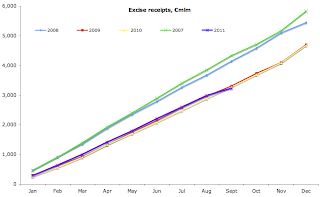 In terms of smaller taxes:
Overall tax returns are now at €24.098bn, up 0.7% or €160mln on the taget and 8.7% on 2010 performance, with virtually all the yoy gains achieved due to USC reclassifying health levy into tax revenue, plus through increases in tax burden on households. 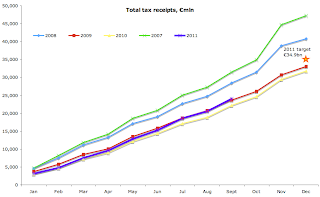 More on the tax burden distribution in the subsequent post.

To conclude - tax receipts show no signs of substantive change in the overall Exchequer position on 2010 broadly confirming that 'exports-led recovery' thesis for restoring Irish economy to health, at the present, remains invalid.

The stamps are well above target due to the pension levy which wasn't included in the original profile published in Feb.

Once you exclude this €450m, tax revenue are actually €300m below profile.

Is it possible to have an estimate of the vat decrease arising from the much heralded decrease for restaurants, etc.? Looks like the outcome so far is neutral on the income side.