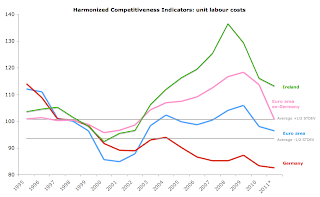 Chart above shows that euro area HCI (unit labour cost adjusted) have deteriorated (higher values in the graphs reflect lower competitiveness) from 96.4 in Q1 2011 to 99.2 in Q2 2011. Q2 2011 reading was 2.5% above Q2 2010 reading, but 6% below Q2 2009 reading. Relative to Germany, euro area HCI(ulc) index now stands at 17.4% premium, reflecting relatively much stronger competitiveness of German economy. 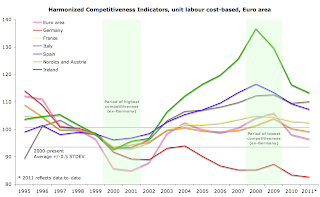 Considering the charts above (note that the top chart reflects annualized data, while quarterly data is shown in the second chart above), Ireland retains its relatively uncompetitive position vis-a-vis all 'old' euro area countries. For larger economies: 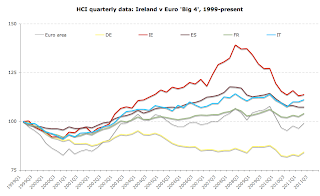 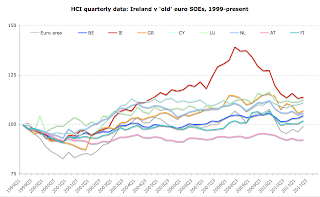 Smaller economies are charted above. 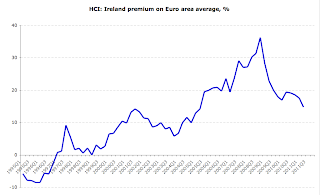 As I have noted on numerous occasions before, much of the gains in our competitiveness in 2009 can be explained by the wholesale destruction of less competitive sectors: construction and domestic services (retail, security etc). The concern is that our future competitiveness gains will be compressed by the fact that from here on, we will need much harder to attain productivity growth in remaining sectors. So far, some nascent costs inflation in other economies have helped us to continue improving compared to euro area average. But in absolute terms, it is clear that since Q2 2010 we have lost momentum in gains in HCI(ulc) measures.
Posted by TrueEconomics at 8:35 PM