It's the Groundhog Day in the euro land once again with September PMIs readings coming in at a recessionary levels all over the place (save Germany, which is statistically insignificantly different from stagnation). More on the euro area leading indicators in the follow up post, but first - Irish Manufacturing PMIs.

NCB released Irish Manufacturing PMIs earlier in the morning today and they make for a disheartening reading. Please keep in mind that these are generally volatile, so some interpretations of the short-term data require identifying a trend, rather than short-term fluctuations.

Overall seasonally-adjusted PMI for Manufacturing (PMI-M) simply crashed, to put it bluntly, in September to 47.3 (statistically-significant reading for contraction as it fell below 48.0 which is 1/2 STDEV down from the growth-neutral reading of 50). This marks 4th consecutive month of below 50 readings. PMI-M is now below 12mo MA of 52.1 and 3mo average of 48.4. Previous 3mo average for April-June 2011 was 52.5, so the swing is very strong - 4.1 points for 3mo averages and 5.2 points on September basis. 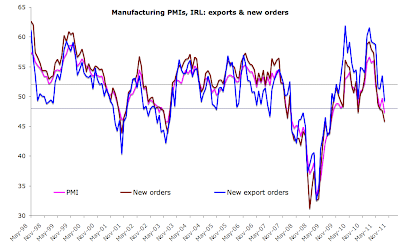 And a more recent snapshot: 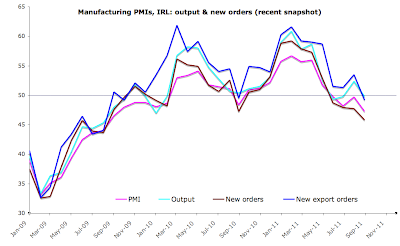 Output sub-index reached back into contraction territory with September reading at 49.8, down from 52.4 in August and back at the level of July. 12mo MA is now at 53.8, well ahead of 3mo average for July-September 2011 of 50.7. You have to go back to 2009 same period reading to hit the numbers lower than the current 3mo average. Overall, however, output sub0-index has been volatile, swinging from positive to negative territory every couple of months or more frequently since April this year.

New orders sub-index has take severe beating reaching 45.8 in September, down from 47.7 in August and marking the fourth month of below-50 readings. Last month's performance was the poorest since August 2009 when the sub-index was at 43.7. New export orders also fell in September, the first reduction in a year, mainly on the back of contracting global demand. Per NCB: "As new orders fell again, firms worked through outstanding business. Consequently, backlogs of work decreased at a substantial pace that was the fastest in 29 months." New Export orders are now at 49.2, down from 53.5 in August. 12mo MA is at 55.7 and 3mo average is 51.3 through September against 3mo average of 56.4 through June. 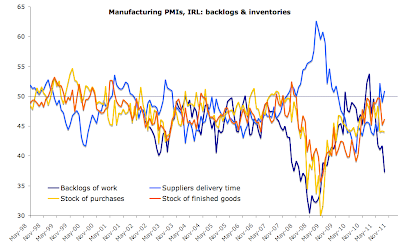 Again, quoting NCB: "After increasing in August, suppliers’ delivery times shortened marginally in September, although the majority of respondents noted no change in vendor performance. The rate of decline in purchasing activity quickened markedly over the month, and was the
strongest since August 2009. Firms cut input buying in line with falling workloads. Stocks of purchases were depleted markedly again in September, with the rate of decline little changed
from those seen in the preceding two months. Post-production inventories also fell as firms
reduced stock holdings in line with lower new orders. The rate of depletion was solid, but weaker than that seen in August." 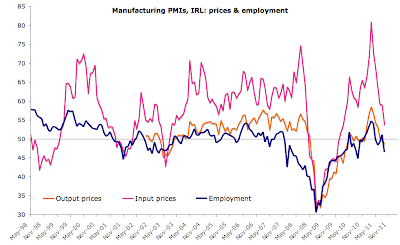 Combined, the two metrics suggest that overall profitability continues to decline in Irish manufacturing, with rate of decline slowing down as of recent months (more on this later this week, once we have Services PMI data).

Overall, very disheartening performance for Manufacturing that, until recently, was the bright spot on our dark economic horizon.
Posted by TrueEconomics at 9:24 AM