Much ignored by irish media so far, the US Congressional proposals to reform corporate tax system are gaining speed and have serious implications for Ireland. In the nutshell, today, US House Ways & Means Committee Chairman Dave Camp described some of his report proposals (see Bloomberg report here), which include:


For US MNCs operating in Ireland this will serve as a powerful incentive to on-shore profits accumulated in Ireland. While the full impact is impossible to gauge - it is likely to be significant, running into 50% plus of retained earnings.

This will, in turn, translate into higher Net Income Outflows from Ireland (see QNA) and thus directly depress our Gross National Product.

I run two scenarios - based on IMF WEO (September 2011) forecasts for Irish GDP, current account and Government expenditure and on historical data from CSO QNA. The baseline scenario assumed that MNCs will expatriate the same share of their profits relative to GDP as they have done before (3 year moving average). The first adjustment scenario adds a 10% uplift on the above scenario and expected growth in GDP to repatriation of profits. The second adjustment scenario adds a 25% uplift. The results are in the charts below. 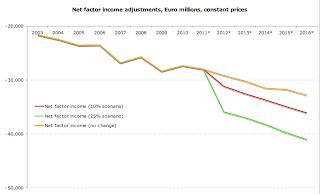 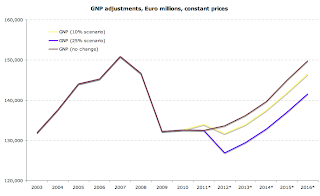 Pretty dramatic. And this is for rather conservative assumption on increased outflows.

Posted by TrueEconomics at 9:08 PM