28/10/2011: Euro area leading indicator points to a recession in October

Euro area leading indicator for economic activity, Eurocoin, has crossed into contraction territory in October. Based on the latest data from CEPR, Eurocoin is now at -0.13%, with corresponding quarterly growth rate of between 0% and -0.05%, signaling the likelihood of a recession for the euro area as a whole. 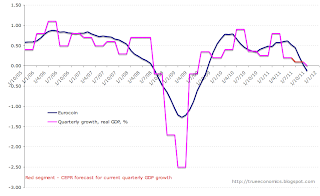 We are now at the lowest reading since August 2009 when Eurocoin stood at -0.21% moving to the upside in September 2009. Eurcoin 3mo average is now at 0.04% and 6 mo average at 0.285%. Year on year Eurocoin has dropped 132%. Per CEPR: "The fall is the result of deterioration in most of the variables that are included in the indicator, and in particular of the worsening climate of confidence among firms and consumers."

Worsening Eurocoin now signals Taylor rule divergence for the future direction in the interest rates, as illustrated in charts below. 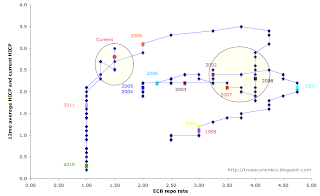 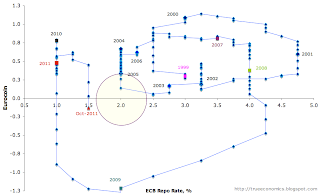