This is an unedited version of my article in October 30, 2011 edition of Sunday Times.

This week was a fruitful and productive one for Europe’s leaders. Not because the battered euro block has finally produced a feasible and effective solution to the raging debt, fiscal and banking crises sweeping across the common area, but because they spent the entire week doing what they do best: holding meetings and issuing communiqués.

The latest plan, unveiled this Wednesday, shows once again that the EU remains incapable of actually doing what needs to be done.

The real European disease is debt. Too much debt. Based on the latest IMF forecasts and statistics from the Bank for International Settlements by the end of 2011, combined public, household and non-financial corporate debts will reach 280% of GDP in the US. In France, the Netherlands, Sweden and Belgium, this number will be closer to 330-335%, in Italy – 314%, in Greece – 290%, in Portugal 375%, in Spain 360%, and in Ireland a whooping 415%.

The composition of these debts, and in particular the weight of public sector debts in total non-financial debt overhang, may differ, but the end result is the same for all of the above. Per August 2011 research paper from the Bank for International Settlements, combined private sector debt in excess of ca 250% of GDP results in a long term (aka permanent) reduction in future growth rates. This reduction, in turn, puts under pressure the ability of the indebted states to repay their obligations.

Further compounding the problem, European banking systems have become addicted to Government bonds as a form of capital. In the past, this addiction was actively encouraged by the Governments, regulators and the ECB. With the latest proposals in place, we are likely to see even more Government/EFSF debt piling into the banks in the long term.

Having ignored basic risk management rules, banks across the Euro area are now fully contaminated with their exposures to sovereign bonds that are about as bad – from the risk perspective – as the adjustable rate mortgage borrowers in the US. Based on the second set of stress tests carried by the European Banking Authority this summer, Greek haircut of 75%, as suggested by the IMF, against the core tier 1 requirement of 9% will imply a capital shortfall of €180 billion. Failing to recognize this, the EU plan unveiled on Wednesday calls for just €100 billion recapitalization under a 50% haircut.

This, of course is far too little too late for Greece and for Europe overall. To bring public debt to GDP levels back to the point of fiscal stabilization (under 100% of GDP) will require ca 20% write-down in Portugal, 40% in Italy, and 30% in Ireland. Europe’s problem is at least €730 billion-strong. It can become bigger yet if – as can be expected – Greece fails once again to deliver on prescribed fiscal adjustment measures and/or the write-downs trigger CDS calls and/or the credit contraction triggers by the measures leads to a new recession. All in, Euro area needs closer to €820-850 billion in funding in the form of both rights placements, assets disposal, and government capital supports. 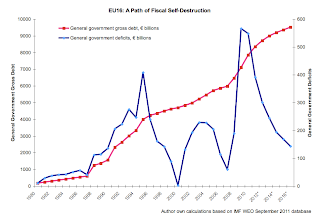 Now, factor in the second order effects of the above numbers onto the real economy.

Injecting €820 billion in new capital or, equivalently, providing some €1 trillion in fresh capital and bonds guarantees as envisaged under the EFSF proposals being readied by the European officials will increase broad money supply by 10%. This is consistent with long term ECB rates rising to well above their previous historical peak of 4.75% - triple the current rate. European banks trying to raise new capital and deleveraging foreign assets will saturate equity markets across Europe with capital demand. Reduced banking sector competition, pressures on the margins and higher funding costs will push retail rates into double-digit territory.

For European companies – more addicted to debt financing than their US counterparts and now competing for scarce equity investors against their European banks – this will mean a virtual shutting down of credit supply. Starved of domestic credit, European multinationals will aggressively divest out of the Continent and pursue jobs and investment growth in places where capital is more abundant – the US and Asia.

Sadly, Krugman is correct. European cure proposals to the crises are worse than the disease itself and the Wednesday’s proposals for dealing with the crisis are case in point.

Firstly, banks recapitalizations – first via private equity raising and bond-to-equity conversions, then via sovereign/EFSF funding – risks extending the recapitalization procedures into the second half of 2012 and simultaneously increase the risk premia on banks funding. In other words, credit crunch is likely to get worse and last longer. Most likely, this will require additional guarantees to ensure the funding market does not collapse in the process. The ECB balance sheet exposure to peripheral banks and sovereign debts – currently at €590 billion, up from €444 billion back in June 2011 – will become impossible to unwind.

Secondly, the insurance option for sovereign bonds issuance is likely to be insufficient in cover and, coupled with greater seniority accorded to EFSF debt can lead to a rise in yields on Government bonds. This, in turn, will amplify pressure on countries, such as Spain and Italy which are facing demand for new bonds issuance and existent debt roll over of some €1.3-1.5 trillion over 2012-2014.

Thirdly, leveraging EFSF to some €1 trillion via creation of an SPIV (Special Purpose Investment Vehicle) will create a nightmarishly complex sovereign debt structure.

Under leverage EFSF option, a country borrowing from the fund €1 billion will receive only a small fraction of the money directly from the fund itself, with the balance being borrowed from international lenders that may include IMF. In order to secure such lending, the EFSF will require seniority for international lenders over and above any other sovereign debt issued by the borrowing state. This will de facto prevent the EFSF borrower from raising new funding in the capital markets in the future.

In all of this, Ireland is but a small- albeit a high risk – player with the power to influence some of the EU decisions, especially those that matter most. Alongside the EFSF reforms and banks recapitalizations, the EU will require stronger fiscal and sovereign debt oversight measures, and ultimately closer integration.

The Irish Government should make it clear from the earliest date possible that Ireland’s participation in this process is conditional on three measures. First, Irish banks debts to the euro system should be written down to the tune of €60-70 billion, allowing for clawing back some of the funds injected into banks as capital and providing a stronger cushion for a households’ debt writeoff. Second, we should demand that the debt-for-equity swaps explicitly encouraged as the means for recapitalization of the euro area banks in Wednesday agreement be applied to Irish banks. These swaps can be used to further reduce previously committed funds and reverse some of the debt accumulated by the Exchequer (on and off its balancesheet). Third, Irish Government should make it unequivocally clear that we will veto any tax harmonization in the future.

On the net, European solutions unveiled this Wednesday are simply not going to work. In Q1 2012 the latest recapitalization of Euro area banks and Greece will run out of steam. Next time around, this will happen in the environment of slower growth and possibly a full-blown recession with Spain, Italy and Portugal all running into deeper fiscal troubles. The real price of Europe’s serial failures to deal with the crisis will be the real economy of the euro zone.

This week’s CSO-compiled Residential Property Price Index (RPPI) had posted another 1.49 percent monthly fall in house prices nationwide. Exactly four years ago, at the peak of residential property valuations, RPPI stood at 130.5. At the end of September this year, the index was just 72.8 or 44 percent below the peak. The misery of falling prices is now impacting not only hundreds of thousands of negative equity mortgage holders, but even the all-mighty Nama. Nama referenced its original valuations of the assets it took over from the banks to November 30, 2009. Since then, residential prices in the nation have fallen 29.5% and apartments prices (the category of property more frequently related to Nama loans) have fallen 33.9%. All in, Nama will now require a 35% uplift on its assets (55% for apartments) to break even, not including the organization’s gargantuan costs of managing its assets.
Posted by TrueEconomics at 11:45 AM