At last, the IMF has published something beefy on the extraordinary (or so-called 'unconventional') monetary policy instruments unrolled by the ECB, BOJ, BOE and the Fed since the start of the crisis in the context of the question I been asking for some time now: What happens when these measures are unwound?

Box 2 in the main paper is worth a special consideration as it covers Potential Costs of Exit to Central Banks. Italics are mine.

Per IMF: "Losses to central bank balance sheets upon exit are likely to stem from a maturity mismatch between assets and liabilities. In normal circumstances, higher interest rates—and thus lower bond prices—would lead to an immediate valuation loss to the central bank. These losses, though, would be fully recouped if assets were held to maturity. [In other words, normally, when CBs exit QE operations, they sell the Government bonds accumulated during the QE. This leads to a rise in supply of Government bonds in the market, raising yields and lowering prices of these bonds, with CBs taking a 'loss' on lower prices basis. In normal cases, CBs tend to accumulate shorter-term Government bonds in greater numbers, so sales and thus price decreases would normally be associated with the front end of maturity profile - meaning with shorter-dated bonds. Lastly, in normal cases of QE, some of the shorter-dated bonds would have matured by the time the CBs begin dumping them in the market, naturally reducing some of the supply glut on exits.]

But current times are not normal. "Two things have changed with the current policy environment: (i) balance sheets have grown enormously, and (ii) assets purchased are much longer-dated on average and will likely not roll-off central bank balance sheets before exit begins."

This means that in current environment, as contrasted by normal unwinding of the QE operations. "…valuation losses will be amplified and become realized losses if central banks sell assets in an attempt to permanently diminish excess reserves. But central banks will not be able to shrink their balance sheets overnight. In the interim, similar losses would arise from paying higher interest rates on reserves (and other liquidity absorbing instruments) than earning on assets held (mostly fixed coupon payments). This would not have been the case in normal times, when there was no need to sell significant amounts of longer-dated bonds and when most central bank liabilities were non-interest bearing (currency in circulation)."

The IMF notes that "the ECB is less exposed to losses from higher interest rates as its assets— primarily loans to banks rather than bond purchases—are of relatively short maturity and yields of its loans to banks are indexed on the policy rate; the ECB is thus not included in the estimates of losses that follow." [Note: this does not mean that the ECB unwinding of extraordinary measures will be painless, but that the current IMF paper is not covering these. In many ways, ECB will face an even bigger problem: withdrawing liquidity supply to the banks that are sick (if not permanently, at least for a long period of time) will risk destabilising the financial system. This cost to ECB will likely be compounded by the fact that unwinding loans to banks will require banks to claw liquidity out of the existent assets in the environment where there is already a drastic shortage of credit supply to the real economy. Lastly, the ECB will also face indirect costs of unwinding its measures that will work through the mechanism similar to the above because European banks used much of ECB's emergency liquidity supply to buy Government bonds. Thus unlike say the BOE, ECB unwinding will lead to banks, not the ECB, selling some of the Government bonds and this will have an adverse impact on the Sovereign yields, despite the fact that the IMF does not estimate such effect in the present paper.]

The chart below "shows the net present value (NPV) estimate of losses in three different scenarios." Here's how to read that chart: 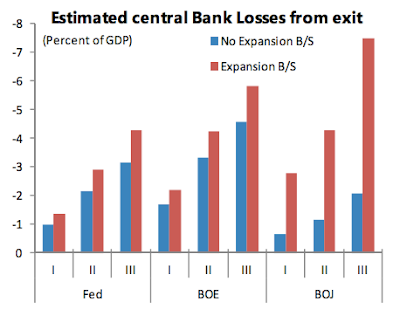 And now on transmission of the shocks: "The appropriate sequence of policy actions in an eventual exit is relatively clear.

And so we do  it forget the ECB plight, here's what the technical note had to say about Frankfurt's dilemma:  "The ECB faces relatively little direct interest rate risk, as the bulk of its loan assets are linked to its short-term policy rate. However, it may be difficult for the ECB to shrink its balance sheet, as those commercial banks currently borrowing from the ECB may not easily be able to repay loans on maturity. The ECB could use other instruments to drain surplus liquidity, but could then face some loss of net income as the yield on liquidity-draining open market operations (OMOs) could exceed the rate earned on lending, assuming a positively-sloped yield curve, if draining operations were of a longer maturity." [I would evoke the 'No Sh*t, Sherlock" clause here: who could have thought Euro area's commercial banks "may not easily be able to repay loans on maturity". I mean they are beaming with health and are full of good loans they can call in to cover an ECB unwind call… right?]

Obviously, not the IMF as it does cover the 'geographic' divergence in unwinding risks: "But the ECB potentially faces credit risk on its lending to the banking system for financial stability purposes. In a “benign” scenario, where monetary tightening is a response to higher inflation resulting from economic growth, non-performing loans should fall and bank balance sheets should improve. But even then, some areas of the eurozone may lag in economic recovery. Banks in such areas could come under further pressure in a rising rate environment: weak banks may not be able to pass on to weak customers the rising costs of financing their balance sheets." [No prize for guessing which 'areas' the IMF has in mind for being whacked the hardest with ECB unwinding measures.]

So would you like to take the centre-case scenario at 1/2 Fed impact measure for ECB costs and apply to Ireland's case? Ok - we are guessing here, but it will be close to:


Ooopsy... as some would say. Have a nice day paying that 30 year mortgage on negative equity home in Co Meath (or Dublin 4 for that matter).

The IMF fears are unfounded because excess bank reserves can only be mopped up by sales of short-dated paper (banks eschew duration risk) whilst all long-dated assets will be held to maturity. Perhaps the authors don't realise this?