A number of updates from the Blackrock Investment Institute Economic Cycle surveys for April 2013. Here are core charts.

Note of caution: some of the countries coverage in responses is thin, so data should be treated as only indicative. And the surveys are based on opinion of external experts, not Blackrock internal views.


"...a positive outlook on global growth, with a net 71% of 127 economists expecting the global economy will get stronger over the next year, (2% higher from the March report), based on North America and Western Europe panel."

For the EMEA panel, "Respondents remain positive on the global growth cycle, with a net 57% of 64 respondents expecting a strengthening world economy over the next 12 months – however this is large downward shift from the net 74% figure last month."

Asia Pacific panel: "The global growth outlook remains positive, with a net of 71% of participants expecting a stronger global economy over the next 12 months; however this is a large step down from the net 84% figure in last month’s report."

Latin American panel: "The global growth outlook remains positive, with a net 47% of 49 participants expecting a stronger global economy over the next 12 months; however this is a large step down from the net 62% in last month’s report."

"With regards to the US, the proportion of respondents expecting recession over the next 6 months remains low, with the consensus view firmly that North America as whole is in mid-cycle expansion.
In Europe, the view continues to be more disparate, with the UK and Eurozone as a whole described in a recessionary state. With caveat that the depth of country coverage varies significantly, the consensus view remains recessionary at the 6 month horizon for France, Greece, Italy, the Netherlands, Portugal, Spain and Belgium." 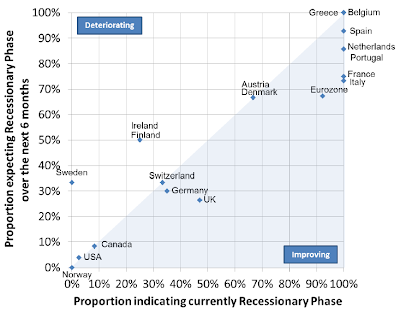 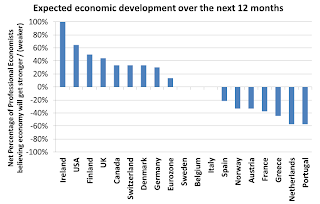 Note: Ireland results are based on very 'thin' data.