Just as I published April update from Blackrock Investment Institute Economic Cycle surveys, here comes May one for North America and Western Europe: 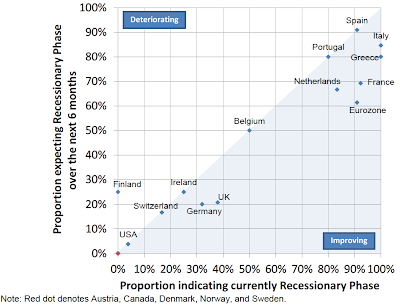 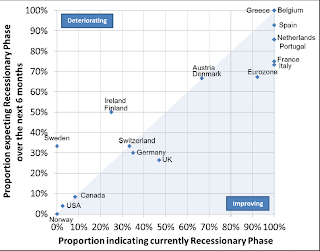 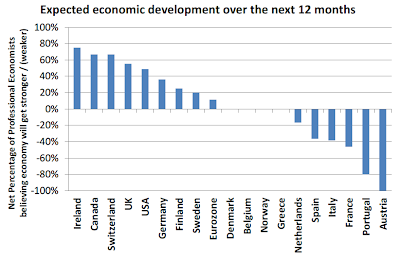 And conclusions (italics are mine):
"This month’s North America and Western Europe Economic Cycle Survey presented a large shift on the outlook for global growth over the next 12 months – although a net proportion of respondents remains positive, this is now a figure of 41%, compared with a net 71% last month. [In other words, things are turning gloomier for global growth outlook]

With regards to the US, the proportion of respondents expecting recession over the next 6 months remains low, with the consensus view firmly that North America as whole is in mid-cycle expansion. [In other words, current growth rates are not expected to rise much as would have been consistent with early-cycle expansion]

In Europe, the view continues to be more disparate, with a generally stronger northern Europe contrasted by continuing weakness in Eurozone as a whole. Belgium, France, Greece, Italy, the Netherlands, Portugal and Spain in particular are described in a recessionary state, with the consensus view remaining in this phase at the 6 month horizon in each case."
Posted by TrueEconomics at 3:28 PM

Publication of the 10th Irish maritime transport publication where the director states quite openly that they have seen probably the biggest boom and bust in the history of shipping markets.

However dry bulk volumes increased by 7%
As a result of farmers importing extra feed in the wet summer of 2012 (agri is 22% of total dry bulk volumes) and steady demand for steam coal in Moneypoint power station.
We have a crazy Aluminium factory in Shannon which dominates dry bulk imports – Bauxite – its there for purely tax arbitrage reasons as it uses it own Gas turbine in this very high energy operation !!!
There was huge controversy about this in the early 80s with a nearby farmer on the national television politics / debate show claiming his cattle were dropping like flys because of the toxic dust from this site.
Despite its continued operation in such a crazy area (Hydro Iceland is better) it is generally not talked about in polite Irish circles.

break bulk volumes (eg. timber , machinery) down 3% , decreased for 5th year straight and is at a 10 year low.
Much of this is coastal traffic in the smaller ports such as New Ross (JFK ancestors home town) although the big ports dominate all sectors now.

Lift on lift off experienced a 3% decline in 2012 when it was growing at 7% a year a decade earlier.

The depression in Europe continues…………..
All so that the banks can have access to cheap labour arbitrage profits from Asia & Germany.