In light of today's 'historic' decision by the ECB to lower its refinancing rate to 0.50% from 0.75%, let's just not get too excited, folks.

1) ECB rates are low. By ECB-own standards. But they are not low by pretty much anyone else's standards, save for countries, like Canada and Australia, which didn't really have a Great Recession. At least not yet. 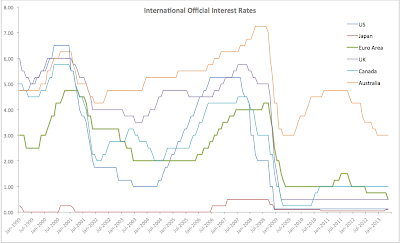 2) ECB rates are low today, but they will be higher one day: 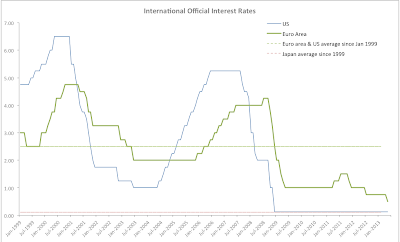 And when they do get to those averages, oh… the bond markets valuations are going to fly out of the window (leaving big black holes in banks balance sheets and pension funds assets ledgers), while equities are going to also suffer risk-repricing away from current dizzying expectations. Meanwhile, mortgages and credit costs will rise and rise faster than the ECB rates for 2 reasons: (a) legacy margins rebuilding that is not even started yet, and (b) see 'black hole' on the bonds valuations side. So when we do start heading toward that green dashed line (and above, as ECB averages are above that green line), things are going to go South fast.

3) And the ramp up back to the mean will have to be sustained and drastic: 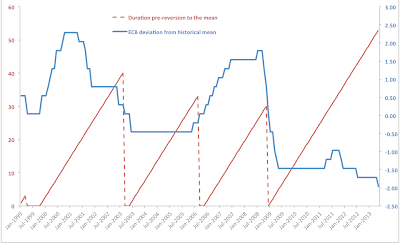 We are clearly in an unconventional period when it comes to mean reversion. In all previous episodes, mean reversion took at most 40 months of deviation from the mean to deliver on (red lines). This time around we are already into month 53 and counting. The longer the duration of deviation, the greater the imbalance built up as the blue line above clearly shows.

Based on average overshooting of the mean in each reversion episode, we are currently 1.79 percentage points away from the mean target and are likely to see additional 1.71 percentage points overshooting of the target on adjustment, which means that the direction we are heading toward, if previous history of ECB rates were to be our guide (very imperfect, I must add) is 0.5%+1.79%+1.71%=4.0%

Close your eyes and imagine your mortgage bill with:
1) ECB rate at 4.0% and
2) Bank margin on ECB rate of x2 at least of pre-crisis levels. 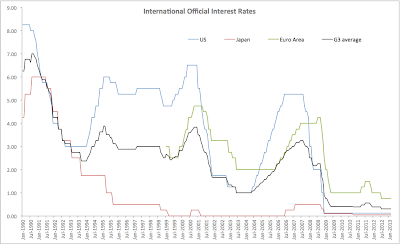 And yet… things are already bad enough… ECB is running policy at massively above the G3 average rates and there is no real relief to the euro area economy in sight.

So what is really going on? My quick comment for Express today:

"ECB's 25 bps cut in the refinancing rate is the central bank's de facto admission of the limitations to its ability to have a meaningful impact on the ground, in the real economy. Let's start from the diagnosis. With previous rate cuts failing to stimulate credit flows and private sector investment, it is now painfully obvious that the euro area economy is suffering from a structural crisis, not a cyclical or a liquidity crisis.  going into today's rates decision the ECB had really just three choices: 1) Do nothing and keep pressure on the Euro area governments to introduce and implement real structural reforms, 2) Do marginally little to sustain some outward expression of monetary activism, and 3) Do something big to attempt unfreezing both demand and supply of credit. The latter would have entailed a cut in the refinancing rate of 70 basis points and setting up an LTRO- like 3- to 5- years programme for lending against collaterilised business and household loans. It would have been risky, but it would have stood a chance of possibly shifting increasing significantly new credit creation. even more dramatic would have been a programme for indefinite financing of the weaker banks - a super-LTRO - set against explicit targets for their writing down of some SMEs and household loans.

That, in the end, ECB has opted for the second option of providing token expressions of accommodative monetary policy using largely weak tools, speaks volumes about the ECB's inherent legal dilemma. The ECB is facing the problem of a structural crisis in the economy, while being armed with a mandate that forces it to explicitly ignore the real economy. Thus, as the result of the crisis, the ECB has consistently traded-down the reputational curve by continuously deploying 'extraordinary' measures of ever-increasing complexity, which are having little real impact in the private economy. ECB's most-lauded OMT, for example, has had zero positive effect outside the Government bonds markets. In short, much of what ECB is doing is providing backstop insurance for the crisis amplification, but little actual means for dealing with the crisis itself.

As the result, ECB's monetary policy decisions of late can be best viewed in the prism of the EUR foreign exchange rates and European stockmarkets valuations. Liquidity supply into the financial channels that are trapped outside the real economy so far have meant firming up of the euro and increased speculative inflows into European equities that stand contrasted with both the fortunes of the euro area economies and the realities of the European companies earnings. Today's decision simply reinforces this trend. yet, as the recent years have shown, the divergence between financial markets valuations and the real economic activity is the sign of systemic malfunctioning in the monetary, fiscal and economic environments. This is exactly the road down which we are traveling, guided by the ECB Governing Council."

And my tongue-in-cheek top of the line conclusion? "ECB's Council throws a wet napkin at Euro area's economic Chernobyl and rests for lunch… breathless from exhaustion..."

So for all of us in the eurozone, tune in at 00:59:
http://www.anyclip.com/movies/despicable-me/beddie-bye/#!quotes/

As this is a Depression, I think your forecast will not come about. Bank of England has met these circumstances before? Consols at the same rate for decades?

The recent past was abysmal and has yet to correct. Nearly all banks in EU will fail.

It is not like you to underestimate the present circumstances? Who are you and what have you done with Constantin????