Loosely based on the famous quip by the US ex-Secretary of Defense, Donald Rumsfeld, uncertain events that present significant risks of disrupting the established status quo can be classed into three categories: the unknown knowns, the known unknowns, and the unknown unknowns.

The former category represents risks we can continuously monitor, assess and price in our policy decisions and everyday lives. For example, a known presence of foreign exchange risk relates to the unknown bilateral exchange rate price, prompting investors and businesses alike to hedge against the potentially adverse changes in the rate.

At the other extreme, the unknown unknowns are what Nassim Taleb called the 'Black Swans'. Neither the extent of their impact, nor the nature of the risk they present are known to us, making hedging against such risks completely impossible.

The case in between the two extremes relates to the uncertain events often called the 'Grey Swan'. This is the most challenging of all forms of uncertainty. On the one hand we know that something very disruptive can happen in the case of approaching risk, but we have no ability to gauge with any precision as to the extent of this risk.

The best current example of such a 'Grey Swan' from Ireland's perspective is the uncertainty surrounding the future of the UK participation in the EU.

Consider first the background that shapes the risk. Aside from significant cultural, historical, institutional and familial links between the two countries, Ireland shares physical and maritime borders with the UK.

As the result of the above links, the UK today is a singularly the largest trading and financial investment partner for Ireland, as far as bilateral trade between nation states is concerned.

On investment side, in 2011, Irish residents held some EUR 261 billion of UK portfolio securities, representing second largest portfolio of overseas investments after those in the US. Of these, over EUR 170 billion of securities related to Irish private sector non-financial corporations' assets. While Irish resident banks deleveraging saw their UK assets holdings fall from EUR140.5 billion in 2009 to EUR 90.4 billion in 2011, Irish resident corporate holdings of UK assets rose from EUR 120.2 billion to EUR 170.2 billion. Irish FDI into the UK at the end of 2011 stood at EUR 50.2 billion against UK FDI into Ireland at EUR 22.2 billion, making the UK our second largest bilateral FDI partner.

The trade and investment links are built on a complex web of economic and institutional inter-connections between our two countries. In addition to direct services trade figures, bilateral economic relations between Ireland and the UK extend to include shared services provision. For example, Irish IFSC heavily dependent on providing back-office and other specialist support to the UK-based institutions. Likewise, our research and development, education and other core professional services and functions rely heavily on institutional cross-links with the UK universities, professional services and research firms and clients.

Beyond purely economic ties, the UK position within the EU is more closely aligned to that of Ireland and our interest than for any other member state.

Both, Ireland and the UK share in the common agenda of seeing increased liberalisation in trade in services across the EU, and in accelerating the painfully slow process of implementation of the EU Services Directive. Both economies, focused on developing new markets and increasing global reach of their industries, require significant autonomy within and devolution of the EU policymaking. In more ways than Dublin is willing to admit, the UK position within the EU as an independently-minded, skeptical and cautious player that constantly acting to test the EU decisions against national economic and social interests serves Ireland much better than the Continental modus operandi of serial surrender of national interests to German and French diktat.

In other words, like it or not, Dublin is closer to London than it is to Berlin. Looking beyond the current crisis, this proximity is based on an equal partnership and symmetry of objectives, rather than on hierarchical hegemony of geopolitical power that is shaping the rest of the EU.


This realisation presents us with a dilemma. A UK referendum on the country continued membership in the EU can lead only three possible outcomes, all with serious implications for Ireland.

In the best-case scenario, UK achieves successful renegotiation of the terms and conditions for its membership in the EU. This will result in the UK continuing to position itself as a cautious outsider to the European core, providing counterbalance to Franco-German axis of geopolitical and economic power that smaller states with strong pro-growth interests, like Ireland, require in order not to succumb to dictate from Berlin or Brussels. This will also mean that our trade and investment links with the UK can continue offering us risks and markets diversification opportunities that we have enjoyed to-date.

In a less benign scenario, the UK remains in the EU, while failing to renegotiate its membership conditions. In this case the UK will be required to rapidly converge with the Continental core on major policies. These will include reforms of corporate taxation codes, harmonisation of other tax systems, and regulatory systems and enforcement institutions consolidation. The result will be reduced diversification of European institutions and increased vulnerability of these institutions to adverse economic and political shocks. Greater centralisation of power and decision making in Berlin and Paris, with London joining the Core, will leave Ireland on the margins of Europe alongside a small number of other demographically younger and economically more dynamic countries, such as Finland, Sweden, and the Netherlands. UK’s inevitable joining of the euro will seal the end of Irish economic model of providing a platform for trade and investment entry into the euro area.

The worst-case scenario, however, is that associated with the possibility that the UK might exit the EU. Even if unlikely, this outcome deserves some serious consideration if only for the impact it can have on Irish economy.

An exit can trigger an outright trade war and capital flows controls between the EU and the UK. There is little love lost between German and French elites and the UK position within Europe, and past experiences with Norway, Switzerland, Lichtenstein and Bulgaria show that EU is capable of acting as a bully in the schoolyard. The consequences of such a conflict will be disastrous for Ireland.

Trade flows disruption, while not necessarily cutting off all exports and imports between the two countries, can shave off as much as 5 percentage points of our GDP overnight. In the longer-run, the impact of reduced joint projects development and co-shared services provision across the border will further reduce our access to the UK markets.

Disruptions to co-located financial services, from banking to pension funds, investment funds and insurance business, as well as in retail, logistics, and wholesale sectors will be significant. Rising cost of services, associated with lower competitive pressures, will benefit some Irish vested interests, such as a number of our semi-state companies, but at the expense of all consumers.

Changes within the EU in the wake of a possible UK exit will undoubtedly harm Irish economic growth prospects. Absent the UK critical assessment and testing of the EU drive for integration and enlargement, Brussels will be free to pursue aggressive tax reforms along the lines currently being developed under the 'enhanced cooperation' procedures by Berlin and Paris. The EU Services Directive agenda will be killed off completely by Paris and Berlin, neither of which want to see increased competition in protected services. Even in its current initial stage the directive promises to boost Irish GDP by 0.5-1% per annum. Research from Open Europe, published this week, estimates that Ireland can gain up to 2.1% of GDP from enhanced liberalization of trade in services beyond the current Services Directive.

Long run impact of the UK adopting a direct competitive stance vis-a-vis the EU can cost Ireland up to 10-12 percentage points off our economy's potential output with little on offer to replace this lost activity.

Bleak as the picture above might be, it offers a clear direction for Irish position vis-a-vis the ongoing debate within the UK and in Europe about both the role of our closest neighbour in the European project and the future of the EU itself.

Ireland needs a strong UK that continues to act as check and balance on the EU's persistent drive toward more integration and bureaucratization of the common policies and governance space. Ireland also needs a strong EU with diversified and flexible institutions capable of absorbing various shocks and creating a functional policies laboratory for possible responses to adverse global and internal challenges. We to support continued UK participation in Europe while respecting our neighbor’s national agenda by encouraging the EU to proactively engage with London in modernizing the terms of the UK membership within the EU. 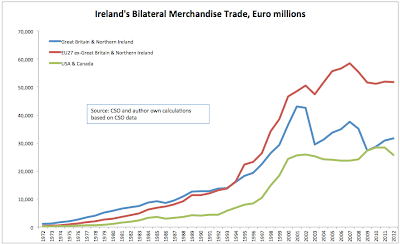 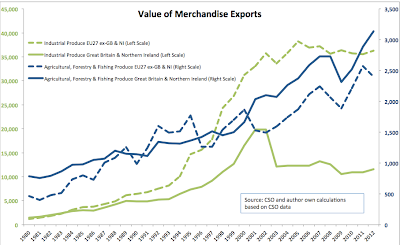 The 2013 QS University Subject Rankings published over the last few weeks should provide some food for thought for Ireland’s higher education mandarins. From the top of the rankings, only one Irish university, Trinity College, Dublin (ranked 67th in the world) makes it into top 100, with our second-best university, UCD, ranking in 131st place. UCC (ranked 190th) completes the trio of Irish universities in top 250 worldwide institutions. In subject rankings, Irish universities are performing poorly across a number of core disciplines. In Mathematics, Environmental Science, and Earth and Marine Sciences no Irish University ranks in top 150. In Chemistry, TCD is the only university to make top 100. No Irish university makes global rankings in Materials Science. No Irish university ranks in top 100 in Physics and Astronomy, Chemical Engineering, Civil and Structural Engineering and in Electrical and Electronic Engineering. TCD is the only university in Ireland with a Computer Science and Information Systems faculty ranked in top 100. The list of mediocre results goes on and on. Put simply, Ireland needs a complete overhaul of its higher education system if we were to even being matching the Government rhetoric about the quality of our workforce with reality.

Posted by TrueEconomics at 9:26 AM

Constantin, Welcome back (again), hope we get to enjoy your column every Sunday from now on. Your efforts are hugely appreciated as one of the few honest voices in the barren economic analysis landscape of this country.