31/5/2013: Bank Holidays Links: On Art, Science and In Praise of Unfocused Thoughts


A quick note before I launch into the links: I will be taking part in http://www.rar.ie/ on June 13th.


Wired.com [http://www.wired.com/wiredscience/2013/05/neurologist-markam-human-brain] article on a fascinating project to build a computer to replicate human brain "down to the individual ion channel". The newsy bit here is that on January 28, 2013, the EU Commission awarded the lead research group (headed by Henry Markram) EUR 1 billion to attempt to perform that task. There is much of interest here - beside the fascinating technology behind. Here are some questions that puzzle myself and many others:


ArsTechnica piece on the role of focus (singularity of objective) in raising IQ [http://arstechnica.com/science/2013/05/if-everything-fades-into-the-background-you-may-have-a-high-iq/] might be leading to an interesting set of questions - possibly even related to the previous link. If focusing on a task help raise our IQ, then:


As you can see, I am not attempting to exert too much focus here… perhaps because I don't really care if I do sound like a Mensa member…

And here's a link to show that focus --> IQ link might be complete rubbish:
http://blog.foreignpolicy.com/posts/2013/05/30/why_indian_americans_dominate_spelling_bees Now, the article quotes: "The first generation immigrant parent brings with her/him a set of memories about how education works and what is to be valued. For Indians that is a memory of endless class tests doled out on a regular basis to evaluate our ability to retrieve information - spellings of words, names of world capitals, cash crops of states, length of rivers, height of mountains, and a plethora of minutiae charmingly labeled as General Knowledge." ... Err… so Indian-Americans are more focused on the task of spelling stuff. Great. I am looking forward to them starting to focus on content of what they are spelling more… which, automatically means they will have to stop focusing and start thinking much broader. Great art and science are not made out of 'focus' - they are made out of wandering.


Now onto art - let's start with kitsch, but brilliant efforts of the Northern Irish and British authorities at creating a Potemkin Village out of Belcoo, Co. Fermanagh in the anticipation of the G8 summit later this month:
http://www.irishtimes.com/news/recession-out-of-the-picture-as-fermanagh-puts-on-a-brave-face-for-g8-leaders-1.1409112 Here's an image from the Irish Times of a comer butcher's shop in town now transformed into a window-display of fake prosperity. 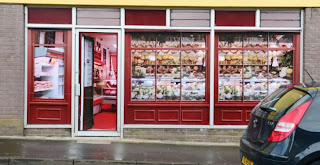 I class this 'art' because to really describe the nature of what is happening in this instance one would need volumes of unpleasant explicatives... let's keep things academic, instead.


Onto serious art: Biennale is on in Venice and I am going to keep linking to it. One of the most memorable things I did so far in my own life was to take part in 2006 Beinnale by writing an essay for irish entry volume.

The main link to this year's Biennale is here: http://www.labiennale.org/en/Home.html and a couple of images / stills from there: 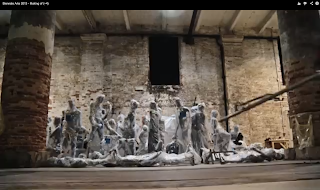 Those heading for Venice for Biennale - do not miss http://www.villamanin-eventi.it/eng/index.php great venue for art in Friuli.

One worth checking out is https://twitter.com/saatchi_gallery/status/339672007127998465/photo/1 and this comes via PetaPixel article: http://petapixel.com/2013/05/30/miniature-world-photo-manipulations-by-14-year-old-photographer-fiddle-oak/

Another one is from Art Basel Hong Kong show: 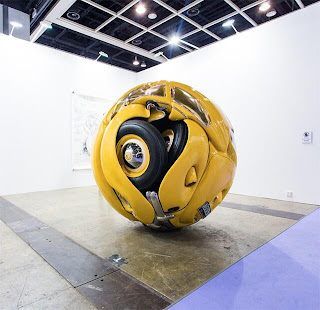 This is the first and probably the last VW, that I would love to own… Artist's work is discussed here: http://www.mondecor.com/kuratorial/ichwan-noor-solo-exhibition-english-version and Art Basel page for the artist: http://abhk.insideguidance.com/artists/ichwan-noor

A quick synopsis of some of the best works at Art basel this year is here: http://www.highsnobiety.com/2013/05/29/10-great-artworks-from-art-basel-hong-kong-2013/  One of my other favourites is: 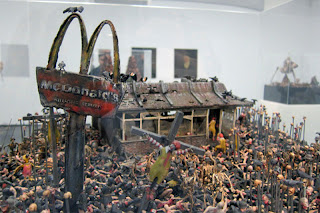 
Cool tech thinking from the 1970s? Sure: http://www.businessinsider.com/what-is-elon-musks-hyperloop-2013-5 And it proves, in passim, that much of the cutting-edge-new is really a well-forgotten-old…


Tripping spirituality meets art and collides with nature? Only in NYC, but stunningly so:
http://www.amnh.org/our-research/hayden-planetarium/resources/manhattanhenge


From things brilliant to brilliant narrative. Here's a superb blogpost on the nature of the value of expressed beliefs: http://noahpinionblog.blogspot.ie/2013/05/bets-do-not-necessarily-reveal-beliefs.html  This treats beliefs in the context of revealed preferences - many analysts and now even journalists make the argument that to reveal true underlying motives for a judgement, one has to have "a skin in the game". I myself was on a receiving end recently from a business editor of one of the major newspapers. When I queried if an interview with investor in one of the banks was fully open and transparent in his/her praise for the bank in a totally uncritical interview with the investor published by his newspaper, the editor simply accused me of not having "a skin in the game" and thus not having a valid point of view to offer. Idiotic? You betcha: anyone's starting position for a conjecture has nothing to do with validity of the conjecture or with testability of this validity. Double idiotic because as a taxpayer and a bank customer, I do have probably more "skin in the game" than the said investor. Nonetheless, the entire incident reminds me that people often think that someone placing a bet (say going long VIX) is equivalent to them revealing their true belief (that for example volatility will rise in the future). Actually, it is not. And the blogpost linked above explains why. It is all really basic, but we too often forget that basic things are the first ones to be forgotten by us…


Lastly, here's an excellent article (based on a very interesting paper) that argues that sustainability of 'local' food sources might be severely over-exaggerated: http://www.guardian.co.uk/lifeandstyle/2013/may/26/worrying-about-food-miles-missing-point?post_id=100005271660100_143433612509027#_=_ Now, one additional point is that we are talking here about UK (heavily subsidised) agriculture vs New Zealand (zero subsidies regime). Should the balance of carbon required to produce subsidies be entered into the equation? I doubt anyone would then be 'ethically' buying much of anything local… The original paper referenced in the article is here: http://www.lincoln.ac.nz/documents/2328_rr285_s13389.pdf

So enjoy the long weekend!

Posted by TrueEconomics at 1:54 PM

Forget about this vaunted project of modelling the brain. Take a single cell in the brain. The analogy has been used by scientists of computers and software to explain what happens inside a cell. There are thousands if not millions of interacting computers that communicate, read and transfer data the cell has many different computer languages and many different operating systems. Bill Gates has said that the code of life is infinitely much more intricate than anything they have ever accomplished. So good luck with modelling the human brain a structure that is possible according to Eric Fromm one of the most complex, if not the most complex structures in the entire universe and this is going to be done for a few billion? Good luck with the Fred Flintstone model they will create.