More updates from the Blackrock Investment Institute Economic Cycle surveys for April 2013. Here are core charts for regions not covered in the previous post.

Note of caution: some of the countries coverage in responses is thin, so data should be treated as only indicative. And the surveys are based on opinion of external experts, not Blackrock internal views.

EMEA:
"With caveat on the depth of country-level responses, which can differ widely, this month’s EMEA Economic Cycle Survey presented a generally bearish outlook for the region. However, there has been a marked improvement in the outlook for Eastern European countries at the 12 month horizon, compared to earlier reports this year.

At a longer horizon of 12 months, the outlook becomes more positive within Eastern Europe, with only the economies of Slovenia and Slovakia expected to continue to weaken." 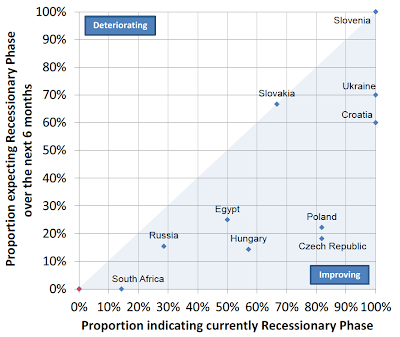 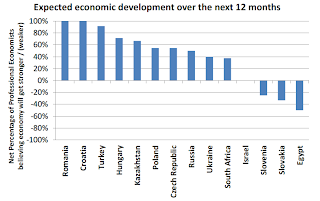 Asia Pacific:
"...continuing bullish outlook for the region. Out of the 14 countries covered, only Singapore and Vietnam are currently described to be in a recessionary state. Over next 6 months the balance of consensus opinion shifts back to expansion for these countries, while in Australia the proportion of economists expecting recession increases to 50%. Australia stands out as the only country in the region where respondents expect the economy will weaken over the next year." 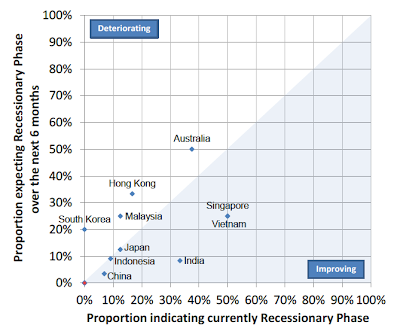 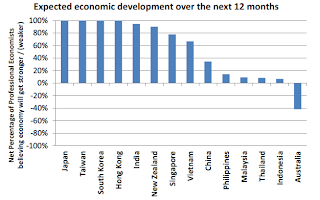 The exceptions to this theme within the region were Venezuela and Argentina. Both are described by the consensus of economists to be in a recessionary state, with growing proportion respondents expecting this to continue at the 6 month horizon." 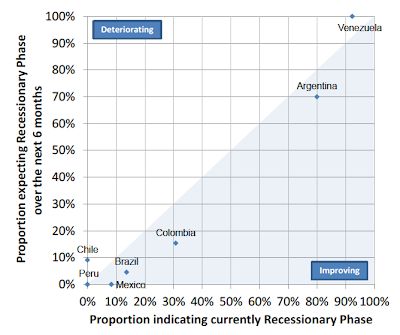 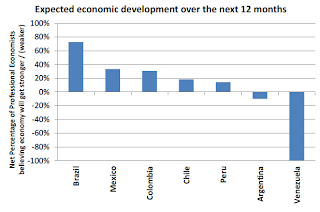 Posted by TrueEconomics at 11:01 AM