Since I've been updating my database on PMI for Ireland (see Manufacturing PMI baseline results for April, as well as a post on Services PMI and a post on latest trends in employment as signalled by PMIs), it is also time to update dynamics analysis on profitability in both sectors.

Now, Services PMI survey covers profitability as a separate question, and it is reported in the post linked above. There is no comparative question in PMI for Manufacturing survey.

Over time, I have been tracking implied profitability changes in both sectors on a comparable basis as a difference between changes in input costs and output charges by the reporting firms. In a sense - it is a metric of profit margins dynamics that is comparable across both sectors.

Longer-term comparatives: since January 2012 through April 2013, Services profitability index averaged -15.31 - a rate of profit margins decline that is worse than the average rate recorded for 3 years period of January 2009-December 2011. 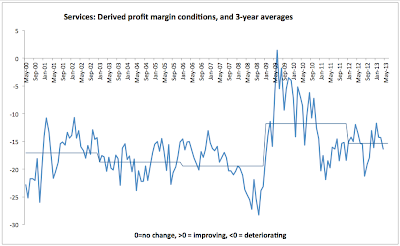 Longer-term dynamics are shown on the chart below in terms of 3 year averages. Since January 2012 through April 2013, Manufacturing profitability index averaged -13.83 - a rate of profit margins decline that is better than the average rate recorded for 3 years period of January 2009-December 2011 (-14.1). January 2012-April 2013, average rate of deterioration is still the second worst on the record. 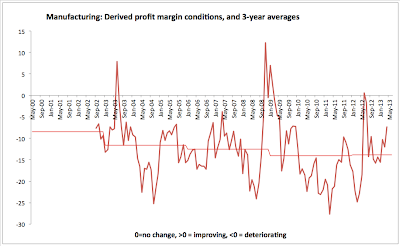 An interesting aside: notice significant improvements in profitability in late 2008 - mid 2010 being exhausted in 2011-present in the Services sector and similar, but slightly differently timed changes in Manufacturing? These nicely coincide with the period of most dramatic unit labour costs declines and overall cost-competitiveness gains in the Irish economy. And, just as those gains virtually stopped in 2011-on, so did profit margins conditions improvements.

Posted by TrueEconomics at 6:57 PM