Everyone is running around with the latest catch-phrase designed to phase out thought: Germany must end austerity. So, folks, what will happen should Germany really end austerity?

Whatever it might mean, suppose end of austerity implies Germany moves from the currently projected general government deficit of -0.31% of GDP to a deficit of -3.31% of GDP, thus increasing Government spending by EUR81 billion in 2013. What then? 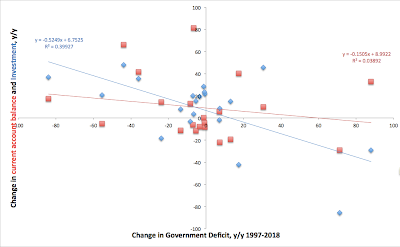 Let's not draw many causal conclusions out of the above, but the clear thing is: Germans do not tend to spend their budget deficits on imports of goods and services at any rate worth mentioning.

Herein rests the problem for the policy idiots squad: if Germans spend EUR81 billion more on Government, short of mandating that Berlin ships cheques out to the Euro Periphery, what on earth will this end of austerity do to help Ireland, Portugal, Spain, Greece or Italy? Add German tourists' bodies on the beaches of Italy and Greece? Fly truckloads of German youths to Spain for booze-ups? Increase sales of Fado music 700-fold? Restart bungalows sales craze in Lahinch? Open German savings accounts in Cyprus? Will these end Euro area periphery crises?

Neither one of the countries in the Euro periphery makes much of what Germans want. Irish trade with Germany is robust, but it is dominated heavily by the non-Irish corporates who channel tax arbitrage via trade, leaving little on the ground in Ireland to call 'national income'.

So what if Germany 'ends austerity'? German demand for goods and services will go up. But it will be demand for German-made and Core-made goods and services, plus stuff from Asia Pacific. It will also push German unemployment from 5.6% to 5.4% or maybe 5.3%, depending on how many more peripheral countries' emigrants Germany can absorb.

These might be good things for Germany. But sure as hell, if German stimulus were to work like neo-Keynesianistas hope it will, pressure on ECB to keep rates low and banks liquidity ample will be reduced, while internal German rates imbalance will amplify. German bond yields might also rise, which will only add to the already hefty debt servicing pressures in euro periphery. Does anyone think it might be a good idea for ECB to hike rates then? No?

Truth is - there is no substitute for getting Euro periphery's economies in order. German stimulus or 'end of German austerity' can sound plausibly nice, but the real problem in the EU is not German sluggish demand (it is a part of German problem, to be frank, but not the major one when it comes to the Euro area as a whole). The real problem in the EU is lack of real, tangible, non-leveraged growth sources.
Posted by TrueEconomics at 4:41 PM