It was May 1 yesterday and in celebration of that great socialist holiday, "In Spain, Portugal, Greece, Italy and France tens of thousands of people took to the streets to demand jobs and an end to years of belt-tightening".

Except, no one really asked them what did the mean by 'belt-tightening'. Some, correctly, meant by the term the concept of transfers from taxpayers (usually via higher taxes, rather than spending cuts) to the broken banks, but majority, undoubtedly, we decrying cuts in Government spending. You see, damned austerity is just that (or supposed to be just that): cuts in the levels of expenditure. These can mean reduction in absolute level of spending, or a reduction in spending as a proportion of GDP.

And, you see, not much of that is going on in Europe nowdays, despite all the fierce rhetoric about savage cuts. 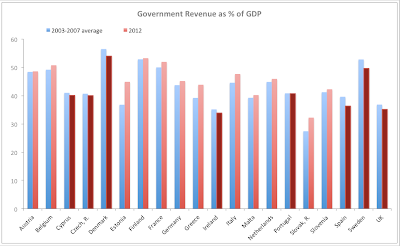 In the chart above, I marked with darker columns countries where tax revenues as % of GDP have declined during the current crisis (more precisely, taking average tax revenues fior 2003-2007 pre-crisis boom days and comparing against 2012 outrun). Guess what?
Now, let's check out expenditure side of Europe's 'savage austerity' story: 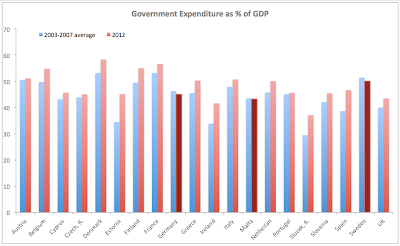 Again, chart above highlights in darker color countries where Government expenditure had declined in 2012 compared to 2003-2007 pre-crisis average in % of GDP terms. The picture hardly shows much of any 'savage cuts' anywhere in sight:
So what is going on, folks? May be we can find austerity in deficits? Afterall, Paul Krugman & Co are telling us that we need to run deficits in the economy during recessions and this is the leitmotif to all of the anti-austerian policies proposals? 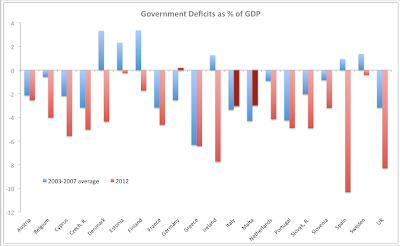 Sorry to say it, folks, errr... No. That is not the case.
As I said above, there are really two reasons for protesting in Europe today against what can very loosely be termed 'austerity':
Aside from the above reasons, please spare yourselves the blind belief in various Social Partners-produced spin about 'savage cuts'. All they care for is to increase even more state spending on their pet projects.
Posted by TrueEconomics at 10:28 AM