If one needs an example of out-of-touch, reality-denying and self-satisfied EU Commissioner, travel no further than Olli Rehn. Here's the latest instalment from Court's Favourite Entertainer of Things Surreal:
http://europa.eu/rapid/press-release_SPEECH-13-394_en.htm

The speech focuses on what went wrong in Cyprus.

Nowhere in his speech does Mr Rehn acknowledge that Cypriot banks were made insolvent overnight by the EU (including EU Commission, where Mr Rehn is in charge of Economic and Monetary affairs) mishandling of PSI in Greek government bonds.

Nowhere in his speech does Mr Rehn acknowledge that Cypriot banks were massively over-invested in 'core tier 1 capital' in the form of zero risk-weighted sovereign bonds (Greek bonds) on the basis of direct EU and Basel regulations that treated this junk as risk-free assets. Mr Rehn states that "The banking problems were aggravated by poor practices of risk management. Lacking adequate oversight, the largest Cypriot banks built up excessive risk exposures." But Cypriot banks largest risk mispricing took place on their Greek Government bond holdings and this was (a) blessed by the EU regulators and (b) made more egregious in terms of risks involved by the EU madness of Greek PSI.

Mr Rehn claims that "The problems of Cyprus built up over many years. At their origin was an oversized banking sector that thrived on attracting foreign deposits with very favourable conditions." Nowhere is Mr Rehn making a statement that the size of Cypriot banking sector was never an issue with the EU, neither at the point of Cyprus admission into the euro, nor at the accession to the EU, nor in any prudential reviews of Cypriot financial system. Mr Rehn flat out fails to relate his statement on deposits to the fact that the EU is currently pushing banks to hold higher deposits / loans ratios, not lower, and that higher deposits / loans ratio is normally seen to be a sign of banking system stability. Mr Rehn is also plain wrong on his claims about the nature of deposits in Cyprus. Chart below shows that Cypriot banks' deposits more than doubled in Q1 2008-Q1 2010 on foot of the EU-created mess in Greece and the rest of the periphery. 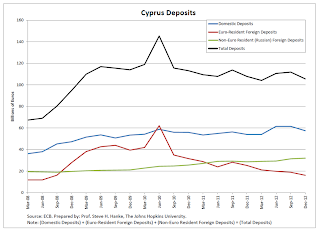 And here's proof that Cypriot banks were running a shop with deposits well in excess of loans, implying low degree of risk leveraging, until Mr Rehn and his colleagues waltzed in with their botched 'rescue' efforts: 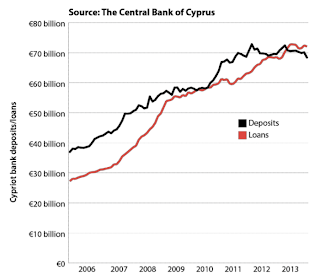 IMF further states that when it comes to deposits, significant risk is also poised by "€17 billion in deposits collected in the Greek branches of the three largest Cypriot-owned banks could be subject to
outflows in response to difficult conditions in Greece. Outflows in the first half of 2011were close to €3 billion (nearly 15 percent of the total), although a portion of these returned to the Cypriot parents as NRD." ECB chart below confirms this risk materialising in the wake of Mr Rehn's structured disaster in Greece: 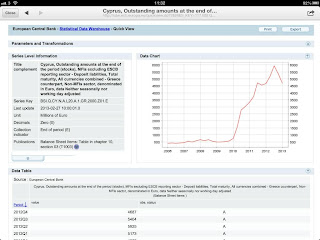 This outflow knocked out billions out of deposits cushion that Cypriot banks needed to reduce their financing needs. And Mr Rhen - the architect in charge of this disaster - has nothing to say about it.

I can go on and on. Virtually every paragraph of Mr Rehn's statement is open to critical examination.

That is hardly news - Mr Rehn has made so many gaffes and outright bizarre statements in the past (including his assertions at every pre-bailout junction that each peripheral country heading into bailout was fully solvent, fiscally sustainable, etc), he became not just a laughing stock of the markets, but a contrarian indicator for reality. What is of concern is that Mr Rehn is still being given the task of speaking for the Commission on Monetary and Fiscal affairs.