For a change from the declining fortunes of Irish manufacturing (aka, production of at least some real tangible stuff by humans, albeit richly peppered with tax arbitrage), the accounting trick called Irish Services (aka, billing of services sold in Mongolia to Dublin by companies minimising tax exposures in the US) is booming.

Good news for GDP. Good or bad news (depending on capex cycle and financial engineering - as exhibited by Apple 'bond' offer this week, etc) for GNP. Even better news for the Government solemnly incapable of supporting growth at home, and thus solely reliant on Mongolian demand for 'Irish' services and Obama administration lag in realising that another corporate tax amnesty is long overdue (note to the White House: check out Ireland's IFSC deposits). 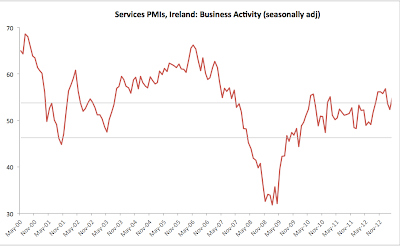 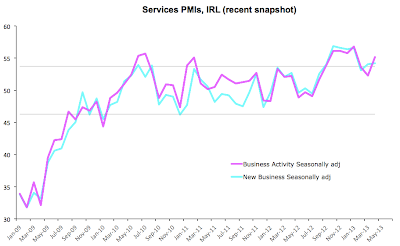 Per last chart above,
I will blog separately on employment and profitability in both services and manufacturing so stay tuned for details on these.

Business confidence and New Export Business sub-indices both showed some slowdown in growth, but still remain in rude health. On foot of this, employment growth rate improved: 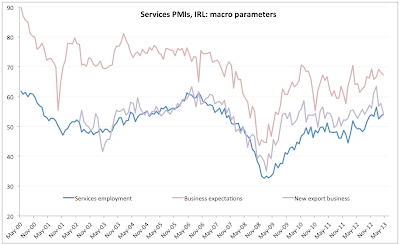 Overall, sarcasm aside, the Services sectors continued to support economic growth, even though much of this growth is coming from the make-believe tax arbitrage stuff. Still, better have make-believe dosh than none at all. And a welcomed reprieve from the past years' trials for the Travel & Toursim sector too.

One note of caution, though: Irish Services PMI have little to do with Irish Services actual activity levels... see here: http://trueeconomics.blogspot.ie/2013/04/742013-irish-services-activity-index.html
Posted by TrueEconomics at 10:35 AM