Here's an interesting chart that summarises both, the source of European disease and the nature of the European response to the crisis: 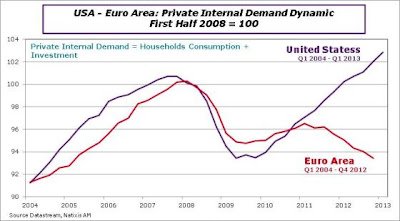 And the point is: during the current crisis, Europeans have opted not so much to reduce Government spending, as to hike taxes, state-controlled prices and charges. Transfer of income from households to banks and Government, exacerbated by the Great Recession and collapse of borrowing have meant a dramatic decline in households' contribution to the economy. End result: Europe is about to go into a Great Depression.
Posted by TrueEconomics at 9:48 PM