A very interesting paper on the topic I had a chance to briefly discuss on twitter recently. Basically, does life satisfaction / happiness decline with income increases? In other words, is there a point at which people earning more are experiencing less happiness? Is there a point of saturation?

"Subjective Well-Being and Income: Is There Any Evidence of Satiation?" by Betsey Stevenson and Justin Wolfers, NBER Working Paper No. 18992 from April 2013 (http://www.nber.org/papers/w18992) attempts to shed some light on this question, often debated and subject of may research papers in the past.

Headline results [emphasis in italics is mine]: "Many scholars have argued that once “basic needs” have been met, higher income is no longer associated with higher in subjective well-being. We assess the validity of this claim in comparisons of both rich and poor countries, and also of rich and poor people within a country. Analyzing multiple datasets, multiple definitions of “basic needs” and multiple questions about well-being, we find no support for this claim. The relationship between well-being and income is roughly linear-log and does not diminish as incomes rise. If there is a satiation point, we are yet to reach it."

Some more beef from the paper (unfortunately - not available to general public, but here's a link to the authors more condensed article on it: http://www.brookings.edu/research/papers/2013/04/subjective-well-being-income).

"In 1974 Richard Easterlin famously posited that increasing average income did not raise average well-being, a claim that became known as the Easterlin Paradox." Needless to say, many scholars since then picked the idea and even advanced it to greater extremes.

Per authors, however, "in recent years new and more comprehensive data has allowed for greater testing of Easterlin’s claim. Studies by us and others have pointed to a robust positive relationship between well-being and income across countries and over time (Deaton, 2008; Stevenson and Wolfers, 2008; Sacks, Stevenson, and Wolfers, 2013).

"Yet, some researchers have argued for a modified version of Easterlin’s hypothesis, acknowledging the existence of a link between income and well-being among those whose basic needs have not been met, but claiming that beyond a certain income threshold, further income is unrelated to well-being. The existence of such a satiation point is claimed widely, although there has been no formal statistical evidence presented to support this view. For example Diener and Seligman (2004, p.5) state that “there are only small increases in well-being” above some threshold. While Clark, Frijters and Shields (2008, p.123) state more starkly that “greater economic prosperity at some point ceases to buy more happiness,” a similar claim is made by Di Tella and MacCulloch (2008, p.17): “once basic needs have been satisfied, there is full adaptation to further economic growth.”

"The income level beyond which further income no longer yields greater well-being is typically said to be somewhere between $8,000 and $25,000. Layard (2003, p.17) argues that “once a country has over $15,000 per head, its level of happiness appears to be independent of its income;” while in subsequent work he argued for a $20,000 threshold (Layard, 2005 p.32-33). Frey and Stutzer (2002, p.416) claim that “income provides happiness at low levels of development but once a threshold (around $10,000) is reached, the average income level in a country has little effect on average subjective well-being.”

It is worth noting the thresholds in income cited above - all are well below the median and mean incomes in the advanced economies today. The test carried out by the authors of the study cover incomes both below these thresholds and above, including to well above (multiples of almost 7 times the highest threshold mentioned).

"Many of these claims, of a critical level of GDP beyond which happiness and GDP are no longer linked, come from cursorily examining plots of well-being against the level of per capita GDP. Such graphs show clearly that increasing income yields diminishing marginal gains in subjective well-being.

"However this relationship need not reach a point of nirvana beyond which further gains in well-being are absent. For instance Deaton (2008) and Stevenson and Wolfers (2008) find that the well-being–income relationship is roughly a linear-log relationship, such that, while each additional dollar of income yields a greater increment to measured happiness for the poor than for the rich, there is no satiation point.

So now, to the paper itself. Some basics first:

"In this paper we provide a sustained examination of whether there is a critical income level beyond which the well-being–income relationship is qualitatively different, a claim referred to as the modified-Easterlin hypothesis.

"Claims of satiation have been made for comparisons between rich and poor people within a country, comparisons between rich and poor countries, and comparisons of average well-being in countries over time, as they grow. The time series analysis is complicated by the challenges of compiling comparable data over time and thus we focus in this short paper on the cross-sectional relationships seen within and between countries. Recent work by Sacks, Stevenson, and Wolfers (2013) provide evidence on the time series relationship that is consistent with the findings presented here.

"To preview, we find no evidence of a satiation point. The income–well-being link that one finds when examining only the poor, is similar to that found when examining only the rich. We show that this finding is robust across a variety of datasets, for various measures of subjective well-being, at various thresholds, and that it holds in roughly equal measure when making cross-national comparisons between rich and poor countries as when making comparisons between rich and poor people within a country." 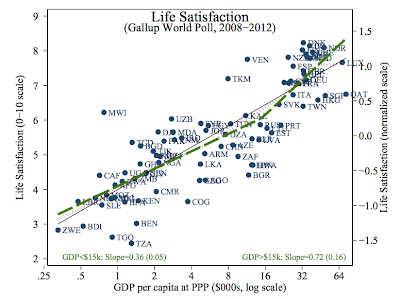 The above shows that the well-being-income gradient is strong for the rich countries and even stronger for the countries where income per capita exceed USD15,000 (GDP per capita). Per authors: "These data clearly reject both the weak and strong versions of the modified-Easterlin hypothesis." Authors attain qualitatively identical results for a number of other measures / surveys of well-being. "Each of these datasets strongly reject" the modified-Easterlin hypothesis. "Moreover, to
the extent that the well-being–income relationship changes, it appears stronger for rich countries." 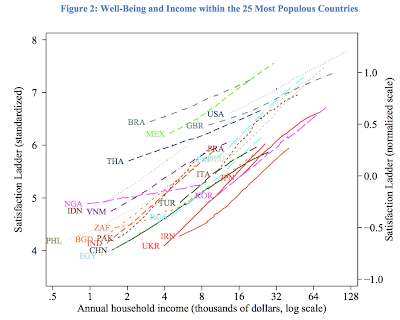 Core conclusions: "While the idea that there is some critical level of income beyond which income no longer impacts well-being is intuitively appealing, it is at odds with the data. As we have shown, there is no major well-being dataset that supports this commonly made claim. To be clear, our analysis in this paper has been confined to the sorts of evaluative measures of life satisfaction and happiness that have been the focus of proponents of the (modified) Easterlin hypothesis. In an interesting recent contribution, Kahneman and Deaton (2010) have shown that in the United States, people earning above $75,000 do not appear to enjoy either more positive affect nor less negative affect than those earning just below that. We are intrigued by these findings, although we conclude by noting that they are based on very different measures of well-being, and so they are not necessarily in tension with our results. Indeed, those authors also find no satiation point for
evaluative measures of well-being."

Here is a slightly clearer chart from the blogpost by The Economist: 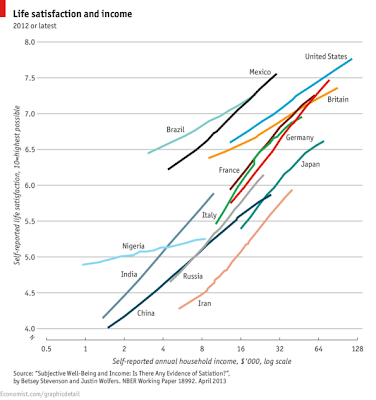 Posted by TrueEconomics at 8:32 PM

People are told to measure themselves by their "culture". So they try.

This survey shows that there are common traits in many countries. If the mass culture were to be changed in some of them, then we would see different results. Adam Smith has long ago found his invisible hand.