A very interesting paper from Banca d'Italia on the two divergent outcomes of similar earthquakes in two Italian regions.

The paper, titled "Natural disasters, growth and institutions: a tale of two earthquakes" by by Guglielmo Barone and Sauro Mocetti (Number 949 - January 2014: http://www.bancaditalia.it/pubblicazioni/econo/temidi/td14/td949_14/en_td949/en_tema_949.pdf) is worth reading.

Here is a summary of findings:

"We examine the impact of natural disasters on GDP per capita by applying the
synthetic control approach. Our analysis encompasses two major earthquakes that occurred in two different Italian regions in 1976 and 1980." 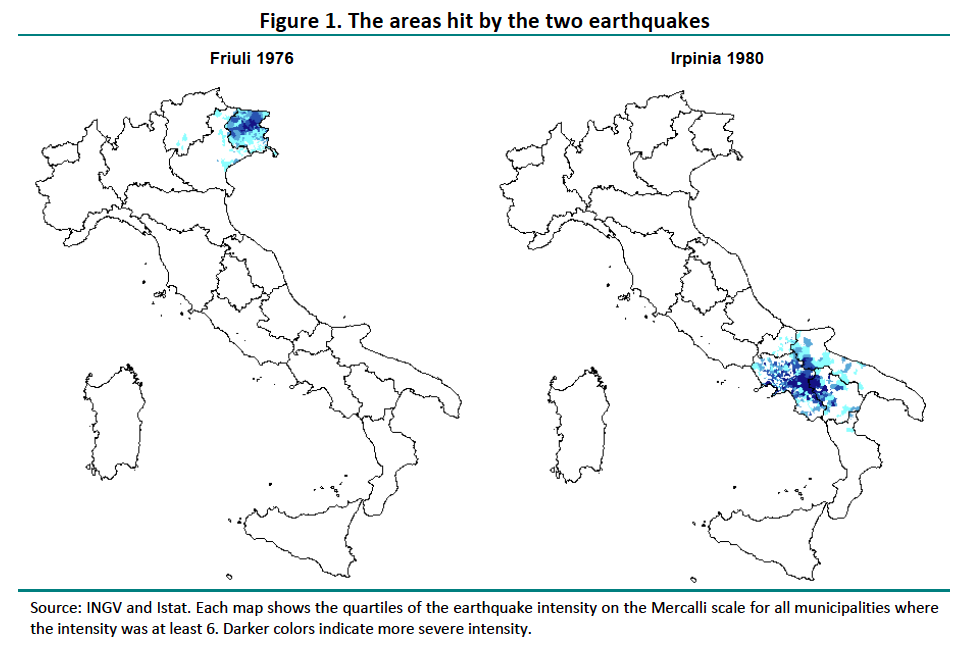 "We compare the observed GDP per capita after the quake (which is an exogenous and largely unanticipated shock by definition) in each area with that which would have been observed in the absence of the natural disaster. We carry out this comparative analysis using a rigorous counterfactual approach, the synthetic control method, proposed by Abadie and Gardeazabal (2003) and Abadie et al. (2010)."

"According to our findings there are no significant effects of the quake in the short term. However, this result can be largely attributed to the role of financial aid in the aftermath of the disaster. Using different assumptions regarding the magnitude of the fiscal multiplier, we estimate that the yearly GDP per capita growth rate in the five years after the quake, in the absence of financial aid, would have been approximately 0.5-0.9 percentage points lower in Friuli and between 1.3-2.2 points lower in Irpinia."

Note that the above suggests that even at lower levels of impact, fiscal transfers played less importance in Friuli than in Irpinia.

This, however, is not what happens in the long run. While financial aid was effective in reducing impact of the earthquakes in their short-term aftermath, the same aid was not sufficient to counter longer term adverse effects. "In the long term, we find two opposite results: the quakes yielded a positive effect in Friuli and a negative one in Irpinia. In the former, 20 years after the quake, the GDP per capita growth was 23 percent higher than in the synthetic control, while in the latter, the GDP
per capita experienced a 12 percent drop." 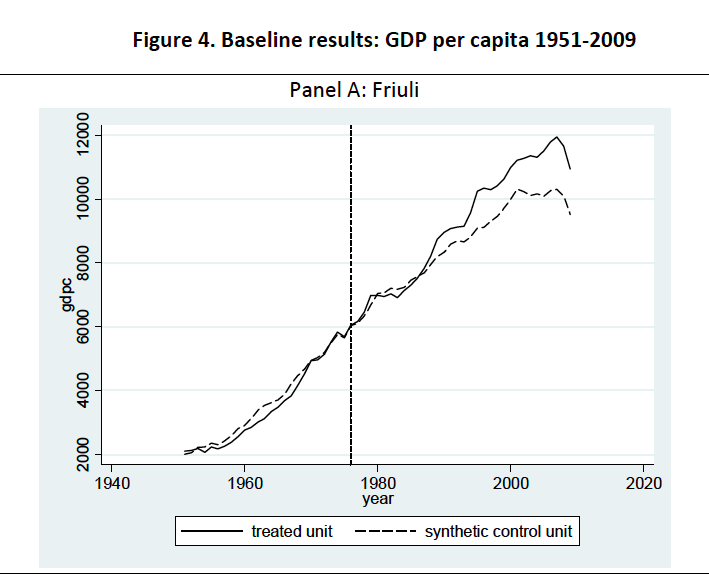 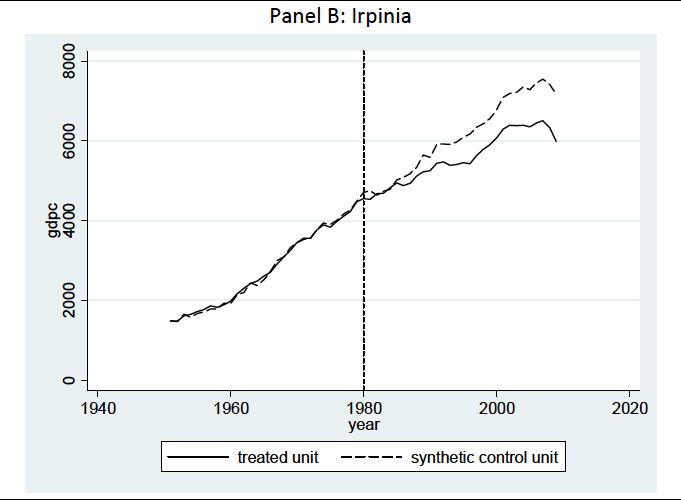 What drove these divergent effects? "After showing that in both cases, the dynamics of the GDP per capita largely mirrors that of the TFP, we provide evidence that the institutional quality shapes these patterns. In the bad-outcome case (Irpinia), in the years after the quake fraudulent behaviors flourished, the fraction of politicians involved in scandals increased, and the civic capital deteriorated. Almost entirely opposite effects were observed in Friuli. Since in Irpinia the pre-quake institutional quality was ‘low’ (with respect to the national average) while in Friuli it was ‘high’, we argue that the preexisting local economic and social milieu is likely to play a crucial role in the sign of the economic effect of a natural disaster. Consequently, our results also suggest that disasters may exacerbate differences in economic and social development."

See these the map highlighting the quality of institutions differences: 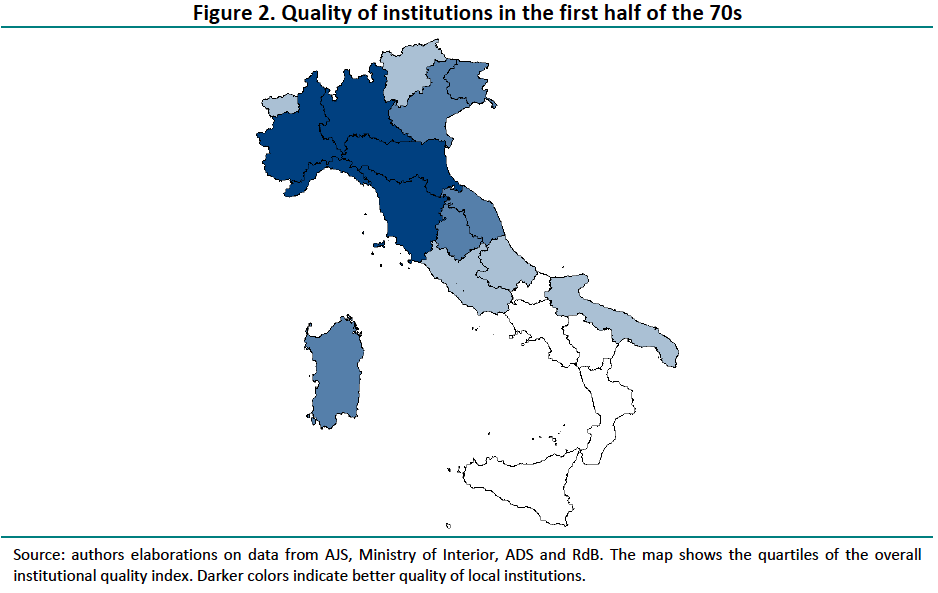 Or in more succinct terms: "Consistently with these findings, we offer further evidence suggesting that an earthquake and related financial aid can increase technical efficiency via a disruptive creation mechanism or else reduce it by stimulating corruption, distorting the markets and deteriorating social capital. Finally, we show that the bad outcome is more likely to occur in areas with lower pre-quake institutional quality. As a result, our evidence suggests that natural disasters are likely to exacerbate differences in economic and social development."

Posted by TrueEconomics at 4:23 PM