Couple additional of points in relation to the upgrade.

Here's the current Western Europe league table in the Euromoney Country Risk Survey, placing Ireland at the top of the peripherals: 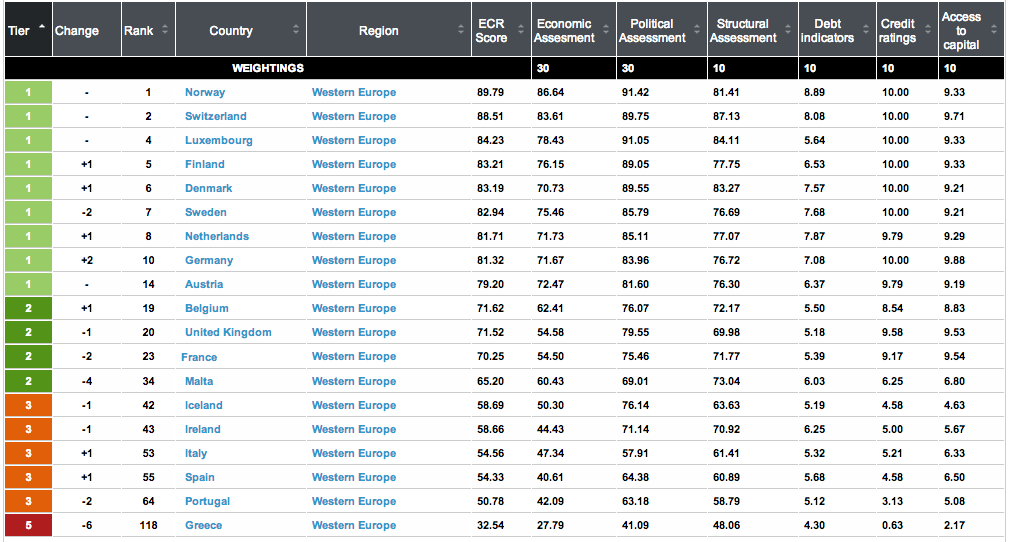 This is a consensus view across ECR group of economists and analysts and the core downward risk source for the ratings is Economic Assessment. Ratings upgrade will most likely translate into a higher score on Credit Rating, pushing us closer to France into the 2nd tier.

The upgrade was predictable and overdue. Two weeks ago I run the analysis of CDS spreads over 2012-2013 period (here: http://trueeconomics.blogspot.ie/2014/01/512013-euro-periphery-in-cds-markets.html) and the core conclusion relevant to today's news is in the last bullet point of the post.
In other words, the CDS pricing was signalling lower probability of default for Ireland. And it was predictable on the basis of core fundamentals as well. Here's from the post back in March 2013:
http://trueeconomics.blogspot.ie/2013/03/1532013-irish-banks-still-second.html "my view is that we are due an upgrade, but a single notch one, to reflect economic decoupling from the peripherals".

So to reiterate: the upgrade was 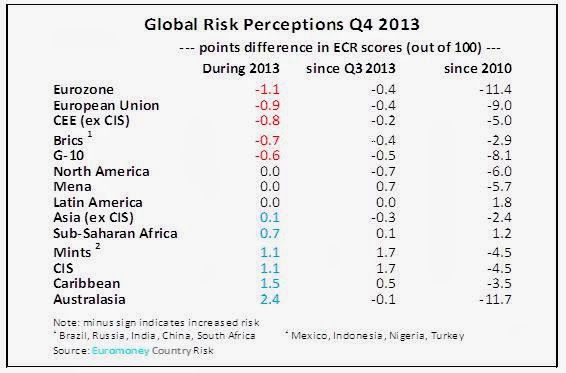 The full analysis (restricted access) is here. My quote on the above is about the general sense of complacency at the euro area 'leadership' level:

My full comment given to ECR on the 2013 results is here:

Euro area remained the weakest economic region globally, over the entire 2013, with a number of countries struggling with high unemployment, recessionary macroeconomic conditions, extremely low and near-deflationary price pressures and operating in the monetary environment still characterised by anaemic growth in money supply and tight credit markets. Based on the latest data, euro area is the only region world wide that is expected to post negative real GDP growth in 2013.

The fact that this abysmal performance comes alongside relatively benign output gap, compared to other regions, and amidst overall improved global economic outlook, signals structural nature of the Great Recession in the euro area. In addition to the weak macroeconomic performance, euro area continued to suffer from acute leadership deficit - a fact that did not go unnoticed by the analysts.

In 2013, eurozone's leadership effectively shifted from the risk-management mode that underpinned relatively rapid and robust rhetorical responses to the crisis in 2012, to a navel-gazing mode. Few of the policy proposals tabled over 2012 in response to the sovereign debt and banking sector crises were implemented or fully structured in 2013. The monetary policy, while remaining  relatively accommodative, continued to deploy the very same measures used in previous years, with little improvement in the credit supply conditions on the ground, at the level of the real economy. Thus, monetary growth was subdued and retail interest rates margins over the policy rate continued to rise, making credit to euro area enterprises and households both less available and more expensive.

The focal point of the euro area adverse news flow over 2013 has shifted from the so-called PIIGS to the relative newcomers to the crisis-stricken periphery: Cyprus and Slovenia. With Cyprus' depositors bail-ins setting a new benchmark for private sector burden sharing that will serve as a template for the euro area future crisis resolution measures, Slovenia has been desperately attempting to avoid a formal Troika bailout of its weak banking system. As the result, the country saw significant deterioration in macroeconomic environment over 2013.

In the second half of 2013, with growth starting to return to core euro area economies, the centre of gravity in the Great Recession moved to economically weak Italy and France and away from the recovery-bound Ireland and Spain. In fact, 2013 macroeconomic and fiscal performance by the former warrants significant improvements in its credit scores, while the latter is starting to gain ground in terms of stabilising external trading conditions, while lagging on fiscal side. The expectation, therefore, is for continued decoupling of Ireland from the weaker peripherals sub-group as signalled by the CDS spreads and bond yields to-date.

Overall, Italy remains the weakest large euro area economy, member of the Big 4 countries of the eurozone, with virtually no growth and no reforms compounded by the risk of renewed political instability. Current expectation is for the real GDP contraction of 1.8% in 2013 following a 2.37% decline in 2012. Italy is also the only large euro area economy that is expected to post a fall in overall exports of goods and services in 2013 and, along side Spain, reduction in levels of employment across the economy. As the result of its poor growth performance, Italy is likely to post the only increase in the net government deficit for 2013 of all big euro area states, leading to an increase in the country debt/GDP ratio to 132.3%. The key to the country deteriorating credit risk scores, however, rests with the general markets perception that Italian political leadership remains incapable to deliver any meaningful structural reforms.

Meanwhile, France is showing all the signs of deepening deterioration in manufacturing and core services activity since the onset of Q4 2013. French economy is currently once again on the edge of another recessionary dip and unemployment is poised to post further increases in Q4 2013-Q1 2014. At the same time, like Italy, French leadership appears to be stuck in 'neutral' when it comes to fiscal and structural reforms - a situation that is likely to spillover into a twin crisis of anaemic growth conditions and renewed industrial unrest in early 2014 (in 2013, French unemployment rate exceeded that recorded in Italy in 2012). With nearly zero structural adjustment underway, France's current account remains in deficit (-1.6% of GDP in 2013), while general government gross debt is now at around 93.5% of GDP, up on 90.2% in 2012, and heading higher in 2014. France also has second largest primary deficit of all larger euro area economies, as well as overall Government deficit that is in excess of that recorded in Italy. With public and household finances in tatters, France is likely to finish 2013 with lowest end-of-year inflation of all big euro area economies, pushing the country closer to deflation.

Posted by TrueEconomics at 11:06 AM