This is an unedited version of my Sunday Times column for January 5, 2013.


2014 is the year of hope, arriving on foot of a renewed momentum in the economies of the U.S., U.K. and, since the beginning of the last quarter, the euro area. As welcome as these positive developments might be, any serious case for the economic fortunes revival in 2014 will have to stand against a rigorous analysis of risks and opportunities that are likely to emerge this year. Some are short-term; others are longer running themes signifying profound evolutionary transformations in the world of advanced economies.

Here are my top five picks for the economic risks and opportunities that are likely to mark 2014 the Year of Change.

Core challenge faced by Ireland over 2014 and beyond is delivering sustainable rates of growth in excess of those recorded over the last decade.

Looking at growth in the GDP per capita reveals several worrisome trends.

Irish growth rates from 2005-through 2013 are running below the levels observed during 1980-1994. With a period of structural catching up with the euro area standard of living well behind us, the task ahead for Ireland is finding new sources for long-term growth.

The above challenges are compounded by the fact that our core trading partners are experiencing structural slowdown in their own economies. We are witnessing continued structural decline in the longer-term rates of growth in real GDP per capita across the advanced economies of the euro area that started in 1995. More immediately, the US and UK economies' recovery in the wake of the latest recession is slow, compared to the recessions experienced in the early 1990s and 1980s. Thus, Ireland is also facing the challenges of opening up new geographies, beyond our traditional trading partners in advanced economies, for exports and shifting more indigenous firms to exporting.

Currently, Irish medium-term growth outlook (2014-2018) implies growth rates that are some 3 times lower than those recorded in 1990s. A sustainable recovery from the crisis will require us delivering economic growth rates closer to those attained in the 1990s. Meanwhile, we are struggling to reach growth levels of the 1980s. 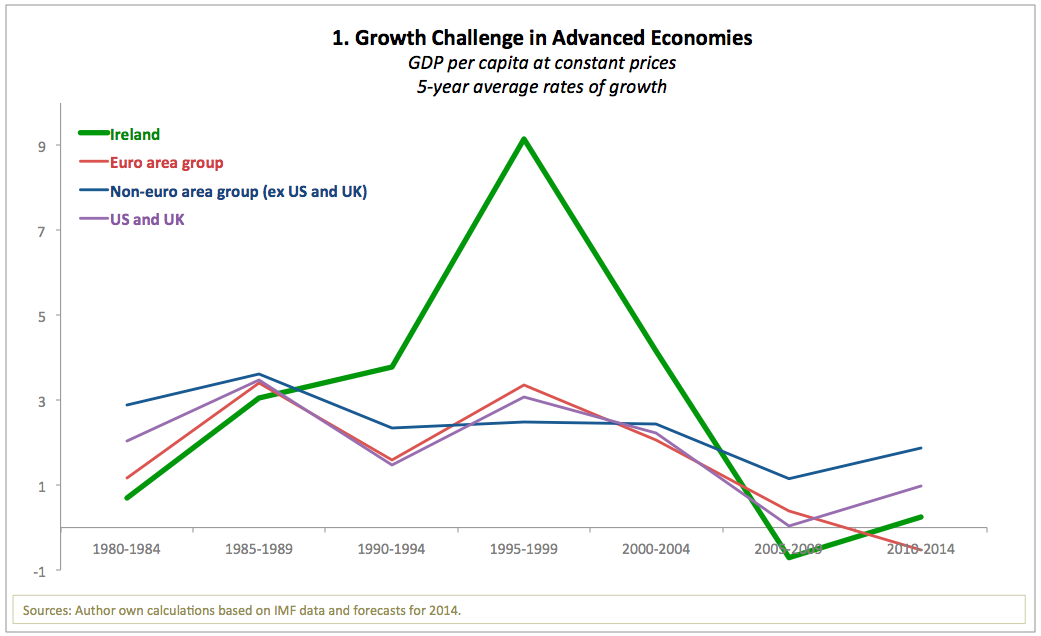 Significant reshaping of the advanced economies' labour force expected in 2012-2022 reflects the shifts in growth toward more human capital-intensive growth.

Increasing specialisation is changing Manufacturing and challenging both the U.S. companies operating in Ireland and Irish indigenous producers. In addition, the ICT Services sector is increasing demand for narrowly-defined specialist capabilities, leading to accelerating depreciation of the ICT sector skills and potential for reduction in overall levels of employment in the sector. The resulting contraction in demand for older skills will be magnified by the widening gap between in-demand new workers and legacy ICT employees.

The downsizing of the state sector will continue. The first wave of reductions during the Great Recession was driven by organic attrition, implying little improvement in productivity amidst staff losses. In the December Gallup poll, 72 percent of U.S. respondents identified 'Big Government' as the biggest threat to the country future, up from 52 percent in 2009. In Ireland, per Edelman Trust Barometer, trust in Government has remained at 15 percent in 2012-2013, ranking the Government alongside the banks as the least trusted institutions. The next wave will see a push for improved productivity, resulting in gradual reduction in employment levels in the sector and simultaneous shift in demand toward higher-skilled public sector workers.

On the other hand, Ireland is likely to gain from the Leisure and Hospitality, and Healthcare sectors growth on foot of ageing population across the major economies. The latter presents both a challenge and a major opportunity. Capturing global demand growth for Healthcare and Social Assistance services will require greater deployment of e-Health, remote health and other data-intensive, ICT-reliant healthcare tools. We are also likely to gain from renewed capital investment in the wake of strengthening global economic recovery. Financial services (chiefly IFSC), and Professional and Business services (especially innovation-focused internationally traded services), will gear up for rising demand. Education will remain a core driver for skills development and human capital investment. 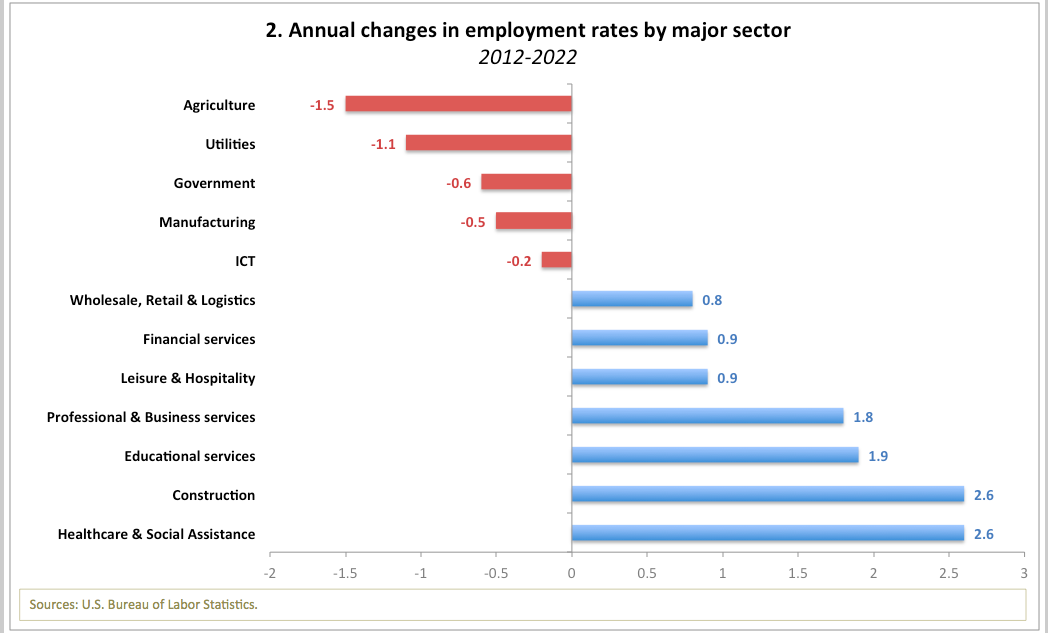 3. Governments' Leverage Up, Banks Leverage Down

With its banking sector deleveraging largely completed, the U.S. economy is enjoying a credit-driven recovery. Both, the U.S. banks and the Federal Government are also increasing their access to global funding markets.

In contrast to the U.S., euro area banks are continuing deleveraging, while financial fragmentation is pushing national banks into greater isolation. With credit on decline for nineteen consecutive months, euro area economies remain starved of working and investment capital and capital markets integration is rapidly collapsing.

All along, buildup in public debt continues unabated without delivering a meaningful uplift in domestic investment activities. While in the U.S. public debt increases are supporting public investment and private consumption, euro area government leveraging up is primarily funding unemployment supports, public pensions and banks, with share of investment spending in total Government expenditure declining. As the result, euro area gross investment as percentage of GDP has declined from 21 percent over 2000-2002 to less than 18 percent in 2013. In the advanced economies ex-euro area gross investment slightly rose from just under 24 percent of GDP in 2000-2002 to 24.2 percent in 2013.

These trends act to reduce Irish exports of capital goods and investment-related services and undercut availability of credit in the domestic economy. The risk for 2014 is that the forces of financial fragmentation will remain at play across the euro area. The opportunity is the market readiness for entry of new investment and lending intermediaries. 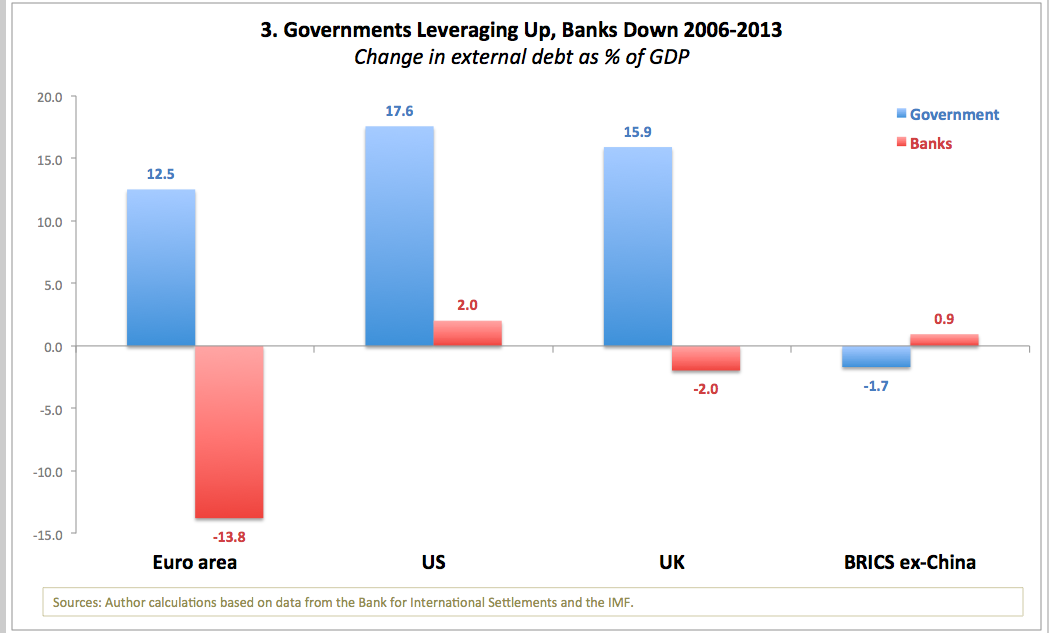 Between 2008 and 2013, labour income share of Irish GDP has declined from 48 percent to 41 percent, implying a loss of roughly EUR3.3 billion in the domestic economy. This decline was driven primarily by re-orientation of GDP growth away from labour-intensive domestic sectors to MNCs-led exports of ICT and financial services.

As the result, declines in labour income have outpaced declines in value added in the economy, implying a transfer of income from the employees to the corporate and state sectors.

Taxes increases have compounded this effect, leading to a significant decline in household investment and consumption.

Over 2014-2016, Ireland faces a major challenge in rebuilding household financial positions and income to achieve sustainable levels of household debt, private investment and consumption. This can only be delivered by reducing the burden of taxation faced by the households, which puts us straight on the collision path between our corporate and wealth taxation policies, and the income tax policies reforms needed to restart the domestic economy.

Good news: by taking radical approach to rebalancing our tax system, we can do both – deliver sustainability-focused reforms and reboot the domestic economy. Bad news: our political and economic elites are too reliant on the status quo to secure their power to be able to structure and implement such reforms. 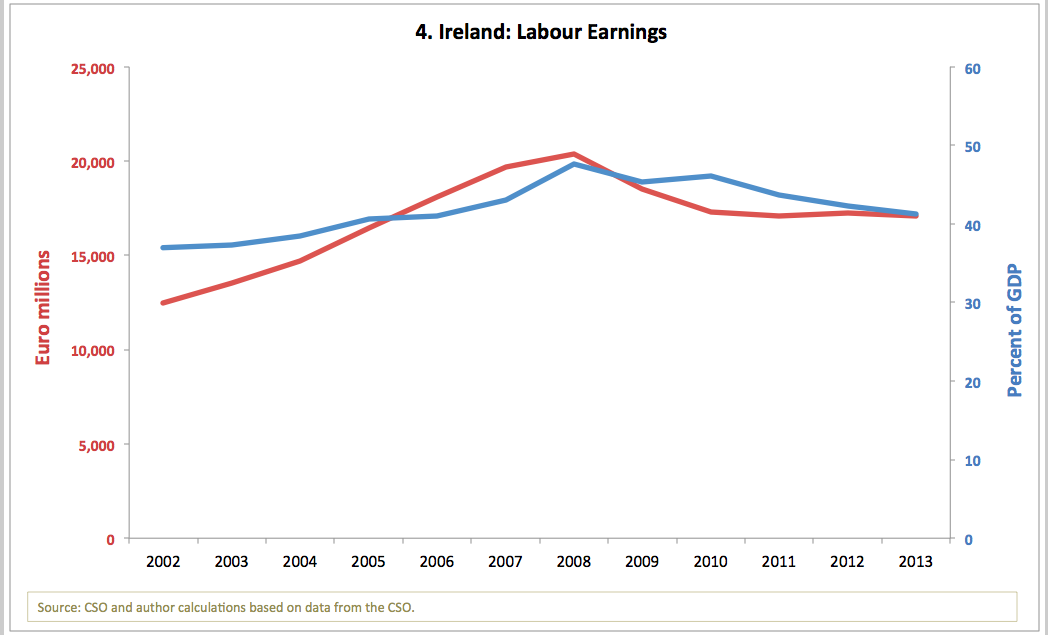 2014 will mark the beginning of the end to unorthodox monetary policies deployed during the crisis.

This month, the U.S. Fed will begin gradual tapering of its purchases of the Government bonds. In advance of this, futures on 3 months Treasuries have been losing value since November. Meanwhile, euribor - the interest rate charged by top euro area banks for loans to each other - has been moving up relative to the ECB policy rate.

The ECB rates have now been in divergence from their historical mean for record 60 months. For now, Frankfurt is concerned with deflationary risks in the economy. Short-term eurodollar 3 month forward curve is pricing in euro devaluation in the short term and higher yields in the U.S. However, the return to historical norms for the ECB is only a matter of time. This will see rates rising over time toward the pre-crisis average of 3 percent from the current 0.25 percent.

For Ireland, normalisation of monetary policies presents significant risks. Rising interest rates, especially if compounded by the banks' drive to increase their lending margins, can derail nascent recovery, depress investment and destabilise once again the residential mortgages, including many that are deemed to have been ‘sustainably restructured’ prior to interest rates rises. In addition, higher yields on Government bonds will take a huge toll on Exchequer finances.

Unless this re-pricing in the bonds markets comes at the time of high growth in the Irish economy, the process of unwinding of global accommodative monetary policies can put us through a severe test, possibly as early as late 2014. 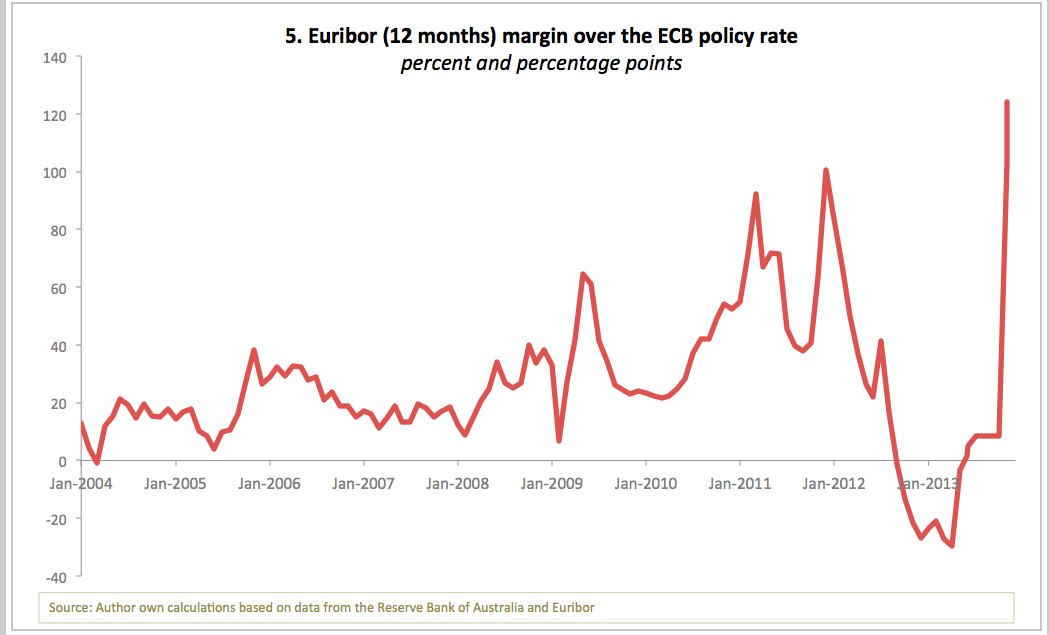 Posted by TrueEconomics at 9:05 AM

As far as projected job growth is concerned, one major limiting and unforeseen factor in future growth is the coming "Robolution" (Robotics Revolution.)

A recent study concludes that 47% of all jobs are "at risk" of being replaced by automation systems and robots in just one generation (roughly 20 years). But this is just the opening chapter of the robotics revolution that will rapidly make human labor all but obsolete.

Our education system must prpeare our young for a rapidly changing employment landscape in the next two decades.