This is an unedited version of my column in Village magazine for December 2013-January 2014.

Alas, the reality of our economic predicament suggests that once the official hullabaloo about the return to growth is stripped back to the bare facts, it becomes clear that Ireland is entering a new age, the Age of Great Stagnation.

The reasons for this are two-fold.

Firstly, we are still facing a long-term debt crisis. No matter what statistic one pulls out of the hat, this crisis, embodied in high levels of debts carried by our households, non-financial companies and the Exchequer, is going to be with us for many years to come.

Secondly, we are still in a structural growth crisis. Neither our own development model, heavily reliant on FDI and transfer pricing by the multinationals, nor our core trading partners growth models, reliant on fiscal and financial repression to drag themselves out of the crisis, are sustainable in the long run.


In our leaders’ dogmatic adherence to the past (a behavioural  fallacy that economists call path-dependency) our official growth theory suggests that economic recovery in our major trading partners will trickle down to Irish national accounts.

Alas, in the longer run, a lot is amiss with this thinking.

For starters, exports-led theory of growth is simply not true. Over 2000-2013, Ireland led the euro area in growth and in a recession. Since the onset of the crisis, cumulative real GDP across the euro area contracted by 2.1 percent. In Ireland, over the same period, GDP fell by 4.7 percent as domestic drivers for the crisis overpowered external factors. As for the recovery period, unlike in the early 1990s, the improving economic fortunes abroad are not doing much good for Ireland’s exports to-date. Over the last four years, volumes of imports of goods by the euro area countries grew by almost 15 percent. Irish exports of goods over the same period of time rose just 2.2 percent.

The reason for this is structural. Tax arbitrage only works as long as there are profits to move through the Irish tax system. Once the profits dry out, arbitrage ends. Pharma sector is a good example of this dynamic. Replacing goods exports-driven growth with ICT services-driven trade is decoupling our external balances from the real economy.

Worse, much of our trade balance improvements in 2009-2013 was down to collapse in imports. This presents a serious risk forward. To fund our public and private liabilities, we need long-term current account surpluses to average above 4 percent of GDP over the next decade or so. We also need economic growth of some 3-3.5 percent in GDP and GNP. Yet, to drive real growth in the economy we need domestic investment and demand uplifts. These require an increase in imports of real capital and consumption goods. Should our exports of goods continue down the current trajectory, any sustained improvement in the domestic economy will be associated with higher imports. A corollary to that will be deterioration in our trade balance. This, in turn, will put pressures on our economy’s capacity to fund debt.

And given the levels of debt we carry, the tipping point is not that far off the radar. In H1 2013 Ireland's external real debt (excluding monetary authorities, banks and FDI) stood at almost USD1.32 trillion - the highest level ever recorded. Large share of this debt is down to the MNCs. However, overall debt levels in the Irish system are still sky high. At the end of H1 2013, total real economic debt in Ireland - debt of Irish Government, excluding Nama, Irish-resident corporates and households - stood at over EUR492 billion - down just EUR8.5 billion on absolute peak attained in H3 2012.

Which brings us to the second point raised in the beginning of the article: our economic, regulatory, monetary and political dependency on the euro area.

Instead of charting own course toward sustainable long-term competitiveness, we remain attached at the hip to the euro area. The latter is now seized by a Japanese-styled long-term stagnation with no growth in new investment and consumption, and glacially moving deleveraging of its own banks and sovereigns. Financial, regulatory and fiscal repressions are now dominating the euro area agendas.

All of the trade growth across the euro area today comes from the emerging and middle-income economies outside the euro block. And competition for this trade is heating up. Even Portugal, Greece and Spain, not to mention Italy are posting positive trade surpluses and these are projected to strengthen in 2014.

Meanwhile, we remain on a slow path to entering new markets, despite having spent good part of the last 6 years talking about the need to 'break' into BRICS and the emerging and middle-income economies. In Q1-Q3 2012, Irish exports of goods to BRICS totalled EUR2.78 billion. A year later, these are down EUR240 million.

We are also missing the most crucial element of the growth puzzle: structural reforms.

Since 2008 there has been virtually no change in the way we do business domestically, especially when it comes to protected professions and state-controlled sectors. Legal reforms, restructuring of semi-state companies’ and the sectors where they play dominant roles, such as health, transport and energy, reductions in the costs and inefficiencies in our financial services – these are just a handful of areas where promised reforms have not been delivered.
Instead of reducing the burden of monopolistic competition in key domestic sectors, we are increasing it. In banking, oligopoly of three domestic players is being reinforced by exits of international banks and lack of new entrants into the market.

In line with the lack of transformative changes in state-controlled sectors, there is little innovation in the ways the Government approaches fiscal policies. Taxes and charges are climbing up, while spending continues to run ahead of pre-crisis trends. On a cumulative basis, over 2008-2013, Irish Government spending above 1997-2007 trend stands at around EUR79 billion. This trend is based on a generous assumption for annual growth of government spending of 6 percent from 1997-1999 on. Over the last sixteen years, average annual growth in our nominal Gross National Product run at under 6.07 percent per annum. Growth in Government spending over the same period stands at 7.22 percent and for current expenditure – at 7.46 percent.

Meanwhile, costs are rising across all categories of regulations, from taxation to professional compliance, to operational aspects of enterprise. Not surprisingly, Ireland is experiencing falling entrepreneurship. According to the World Bank data, in 2004-2008, Ireland's average density of start-ups was 6.1 allowing for an average of 17,500 new companies to be formed per annum. In 2012 the density fell to 4.5 and the number of new companies registered slipped to 13,774.  This does not account for numerous re-openings of the businesses liquidated over the recent years to resolve the back-breaking tolls of upward-only rent reviews.

The political cycle is now turning against the prospect of deep reforms with European and local elections on the horizon.  With it, any prospect of real, structural change in the economy is fading away. The current technical recovery in the economy is likely to push Irish growth to above the euro area average rates in 2014. Beyond then, there is little visibility as to what can sustain such a momentum. In short, enjoy this late sunshine, while it lasts. 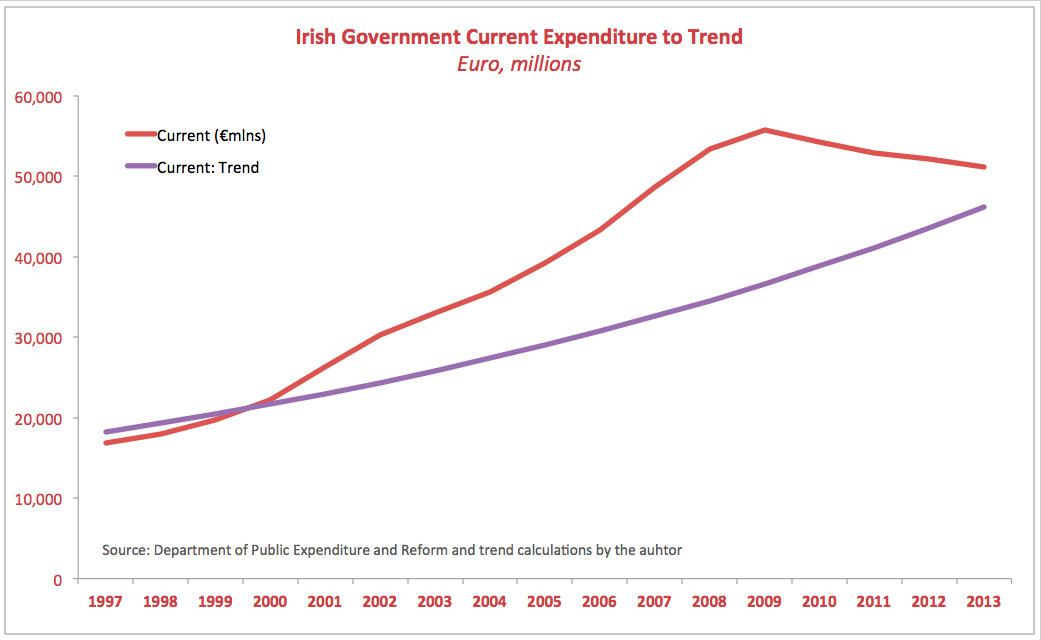 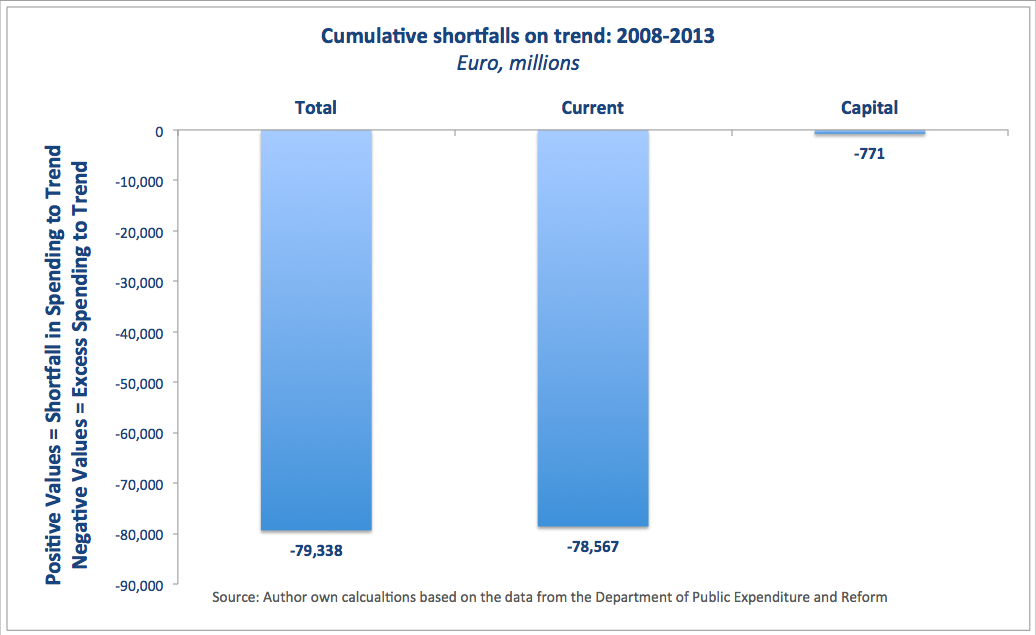 Posted by TrueEconomics at 8:19 PM