Via @calculatedrisk blog, we have an updated chart comparing jobs destruction in the US for the Great Recession against the previous downturns (post-WWII): 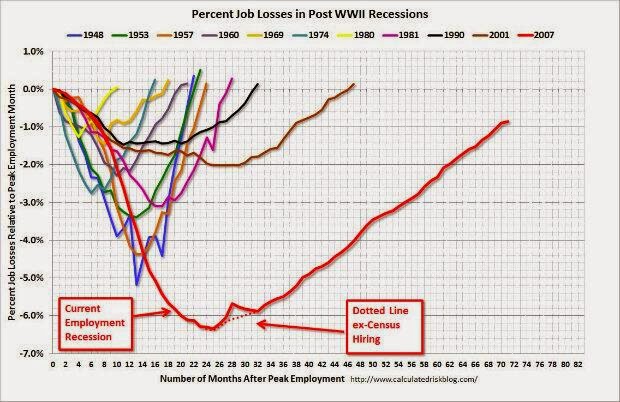 I noted before that in addition to highlighting the severity of the Great Recession, this chart also shows that since 1981, downturns in the US have been marked by ever-extending duration of periods of jobs losses recovery.

Another worthy note is to point out that the US economy is now in 71st month of jobs levels below pre-crisis peak, which means that the US has already clocked almost 6 years of jobs losses. On current trend, it will be around 8-9 more months before the US fully recovers to the pre-crisis jobs levels. Given labour force and demographic changes during the crisis, and given pre-crisis long-term trends in jobs creation now foregone due to the crisis, the US is unlikely to regain the pre-crisis trend levels of employment any time in the next 5 years if not longer. That's the so-called 'lost decade' extending to more like 12 years or beyond.

At least the headline facade of 6.7% has been exposed by the Dec '13 US Employment report.

Always a dubious metric compared to still down-trending labor force participation rate(LFPR). Which is doubtless why Yellen's Fed has signaled it will 'use broader measures'.

And a large micro-targeted printing press, I'd advise.

Y'see, I recently interviewed Martin Ford who cited Oxford research showing that 47% of US jobs are open to automation within the next two decades.

As market analyst Eric De Groot puts it: "The world is changing faster than the status quo's ability to restrain it."

Or manage it, even.

So, good luck with all that.

Where's a fit-for-purpose economic system, when 'ya need one eh?

What do you think of Nomura's Bob Janjuah's prediction of an another crash at end of Q1 2014?

Sean, I am not sure about the timing, but I do think we are in for more turbulence and risks rising. Not exactly as quick as Q1 2014, but possibly in H2 2014, after the elections.