McKinsey published this week a large study on the jobs markets outcomes of higher education.

The basic conclusion is that from employment point of view, European education is - on 'average' - not exactly fit for purpose.

I know, this is bordering on soliciting nasty responses from Irish academic establishment. Last time I dared criticise some of the practices witnessed in our higher education, I had triumphant academics denouncing myself across their blogs, as if the louder the chorus, the closer to truth the arguments get. Still, caveats on McKinsey research aside, the paper does present worrying conclusions and some evidence.

Note that Ireland is not explicitly covered in the study, so any analysis would have to be on the foot of comparatives to other systems. I am not going to provide this here.

In the nutshell, McKinsey suggests that educated Europeans are lacking basic work skills and that European education system is suffering from poor access, high cost, poor career planning and development, and lack of applied skills focus.

Evidence:  "The conventional wisdom, of course, is that the financial crisis and slow growth are the reason so many are finding it difficult to find stable, full-time work of the kind that will allow them to raise families and evolve into productive adulthood. This is true, of course, but it is not the whole truth."

"Youth unemployment was at a high level in many countries long before the financial crisis began to bite. Compared to unemployment in the general population, youth unemployment is stubbornly high in Europe... For the EU as a whole, the youth unemployment rate has not dropped below 17 percent at any point this century." In other words: "… economic conditions are not to blame for the frustration of employers as they evaluate the skills of young applicants."

Per McKinsey survey: "Only four in ten employers surveyed, in widely different countries and industries, reported that they were confident they could find enough skilled graduates to fill entry-level positions."

McKinsey concludes that "…a lack of job-readiness skills— even in countries with slack labour markets—is hindering employment for young people. In effect, many employers choose not to hire, rather than take a risk on spending time and money training them."

"The shortage of skills is also holding back employers. In each one of the countries surveyed except the United Kingdom, more than a quarter of employers said that lack of skills has caused significant problems for their business. It is particularly interesting to note that in the countries with the highest youth unemployment, such as Greece, the proportion of employers reporting lack of skills as a problem was generally higher." 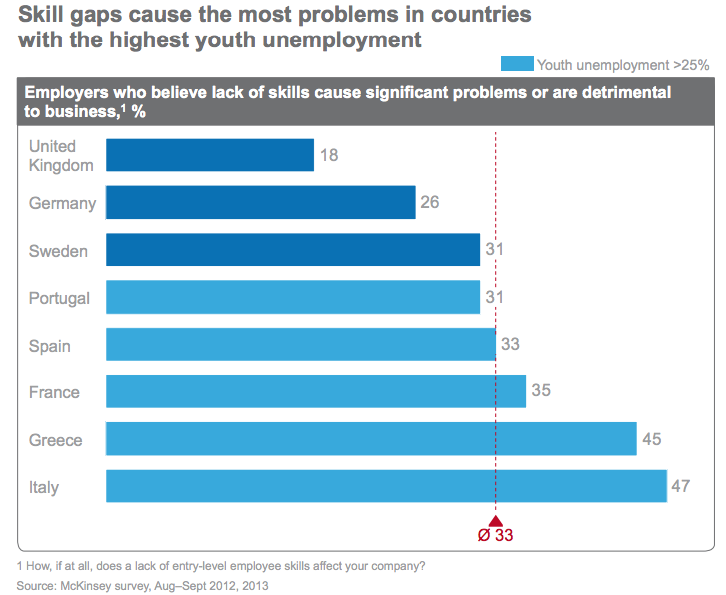 When you read McKinsey reports, the core problems with education-based skills development are striking.

"The most important barrier to enrolling in post-secondary education is cost. Although university tuition fees are generally highly subsidised in Europe, many students find the cost of living while studying still too high to sustain."

Applied skills? "...in a number of countries, vocational courses are not subsidised and can therefore be prohibitively expensive."

"A second barrier is a lack of information. Except in Germany, fewer than 25 percent of students in Europe said they received sufficient information on post-secondary courses and careers. In Europe, where many young people make a decision between vocational and academic paths at around age 15, such information is crucial."

Obviously, why would academic institutions bother with career advice when education is not about achieving any employment / career/ economic / business outcomes, as such outcomes pollute the pristine world of academia? Remember, we have academics who are proudly denouncing the pressures for skills and aptitude from the economy.

Not surprisingly, with the above attitudes, learning real trades and skills is a 'dirty' thing. "A third is stigma. Most of those surveyed said they perceived a social bias against vocational education even though they viewed it as more helpful to finding a job than an academic path. Fewer than half of those who wanted to undertake a vocational course actually did so."

On basic skills shortages: "...building the right skills, too many students are not mastering the basics, with businesses reporting a particular shortage of “soft” skills such as spoken communications and also problems with work ethic."

"Furthermore, too many young people are taking courses that lead to qualifications for which there is reduced demand. In Spain, for example, the number of people employed in construction has dropped 62 percent since 2008, but the number of students graduating in architecture and building increased 174 percent since 2005."

There are serious issues with 'chasing demand' view of education, issues arising due to long lags to completion of education, changes in trends in demand for skills etc. But there are also real problems here - lack of serious career guidance and development not only in the last year of education, but also in the first year, and before entering the third level institution.

Ok, you hear the shouting going on in academia, "we are no slaves to business" and "employers would say so"… but the problem is that even students themselves are noticing. Chart below illustrates: 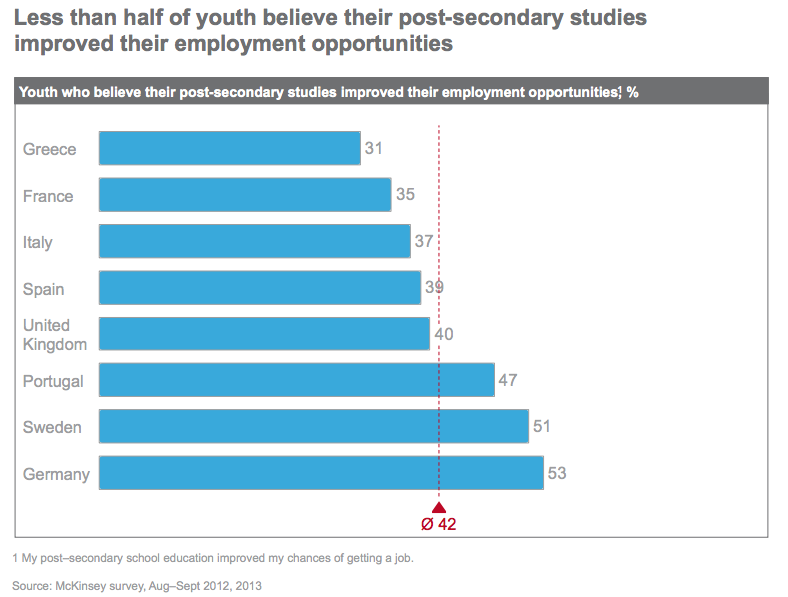 There's loads more to read in the reports, so I encourage you do that... Valerian drops can be purchased in your local (to the University or IT school you are teaching at) pharmacy...
Posted by TrueEconomics at 7:21 PM

it is a survey of perceptions and respondents are pessimistic but the Germans who are probably the most pessimistic in Europe appear to perceive that post-secondary education/training is fairly good.
part of that is because once the young German enters the workforce there is actually work for him or her and partly because their vocational training is very good.

It's not academia that's the problem, it's employers expectations. When my Dad graduated with a degree in mechanical engineering 55 years ago, his first employer did not expect him to have any useful skills - for the first 4 years graduates were treated exactly the same as trade apprentices, being taught useful real-world skills in dirty workshops. Employers should not expect the state to do their training for them.

1) 3rd level education is not State and this has nothing to do with 'state doing training for someone' - this is about quality of education in applied sense. education for which employers co-pay by providing income to parents and tax receipts to education funding.
2) If employers should not expect skills, may be we should not expect employers to create jobs. Just to be symmetric on this. So let's keep producing unemployable graduates. Because it's just fun doing so...
3) On-the-job training and the constraints of it are both well established and researched areas. These are not new.
4) In current environment - globally - waiting for 4 years to employee to ramp up skills to become productive, especially if these are non-firm-specific skills is something that no one can any longer afford. 55 years ago we had cars without airbags and black and white TV sets too.