A quick note on the IMF update to the World Economic Outlook, released earlier this week. Here are some charts showing core forecasts progressions for growth and other global economy's performance metrics, with brief comments from myself.

The core point in the below is where does one exactly find the 'good news' relating to the IMF upgrading growth conditions expectations? The answer is that, contrary to media reports, the upgrades evaporate when once compares January 2013 forecasts against January 2014 ones, although there are some improvements in comparative for October 2013 against January 2014 forecasts. Materially, however, the upgrades are minor. 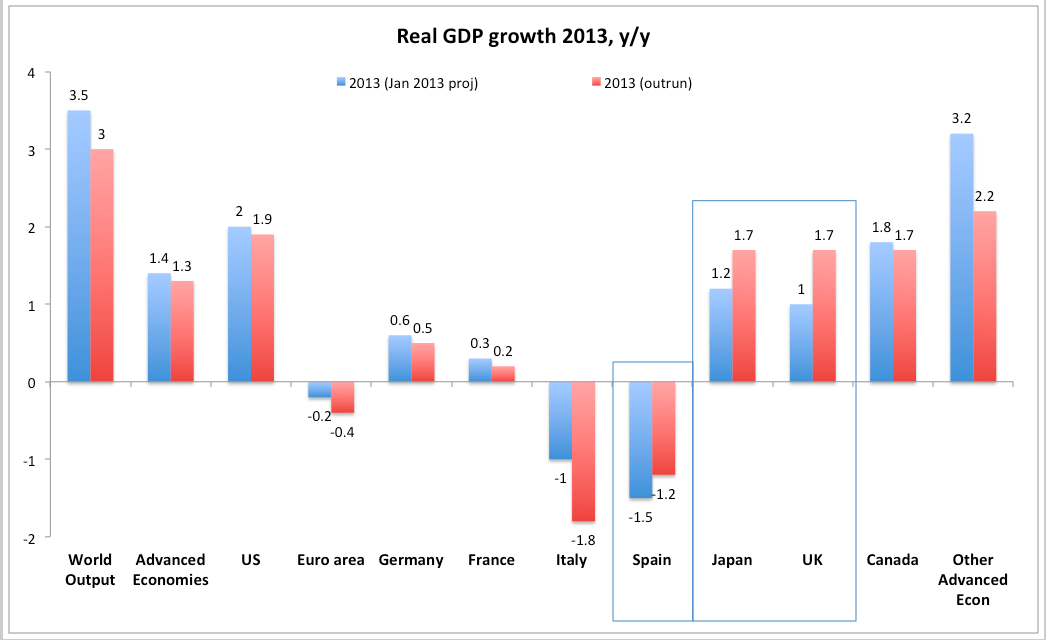 The above chart shows evolution of real GDP growth for 2013 from the most recent forecast (January 2013) to the latest estimate (January 2014). The notable feature of this is the deterioration in underlying economic conditions over 2013, with forecast from January 2013 overestimating expected outrun for Global Economy growth and for all major advanced economies, save Spain, Japan and the UK. In case of Spain, forecast and outrun differ in terms of shallower expected decline in real GDP now expected for Spanish economy, compared to January 2013 forecast. In the case of Japan and the UK, the difference in higher estimated growth rates compared to forecast.

Moving on to 2014 forecasts for real GDP growth: 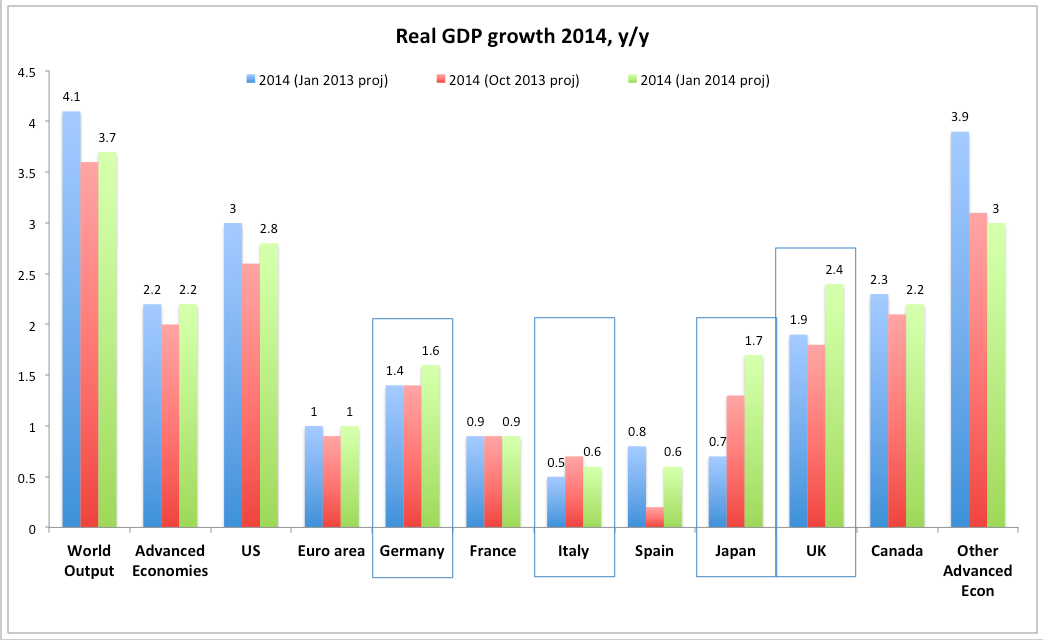 Much has been said in the media on foot of the IMF upgrade of its forecasts for global growth for 2014. This analysis is solely based on the comparing IMF outlook published in October 2013 against the forecast published this month. However, looking at January 2013 forecast against January 2014 forecast shows that the IMF outlook for the global economy has deteriorated since a year ago, from 2014 real GDP growth forecast of 4.1% to 3.7%. The same applies to all major advanced economies, save Germany, Italy, Japan and the UK.

Another important note here is that in the case of Italy and Germany, the difference between January 2013 and January 2014 forecasts is well within the margin of error. And that for the Advanced Economies as a whole, the forecast between two dates has not moved at all.

Thus, overall, the news analysis of 'greater optimism' from the IMF with respect to growth is really unwarranted - there is very little significant change to the upside in the IMF latest outlook.

Things are a little better for 2015 outlook: 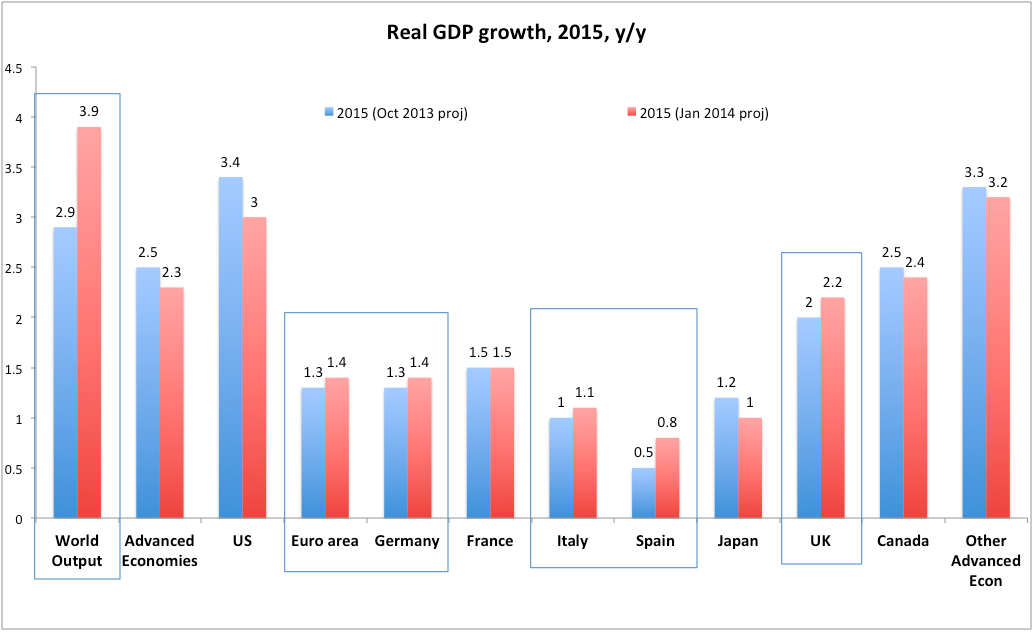 However, we only have two points for comparing these forecasts: October 2013 and January 2014, so the above analysis (12 months span between forecasts) is not really available. Nonetheless, there is a significant marking up of global growth expectations between two forecast dates (from 2.9% to 3.9%), and  small downgrade in Advanced Economies growth forecast from 2.5% to 2.3%.

In addition, only Spain and the UK received a significant (statistically) growth upgrade, with the Euro area, Germany and Italy upgrades being within the margin of error.

The matters are actually far worse for the Emerging and Developing economies. 2014 forecasts are shown below: 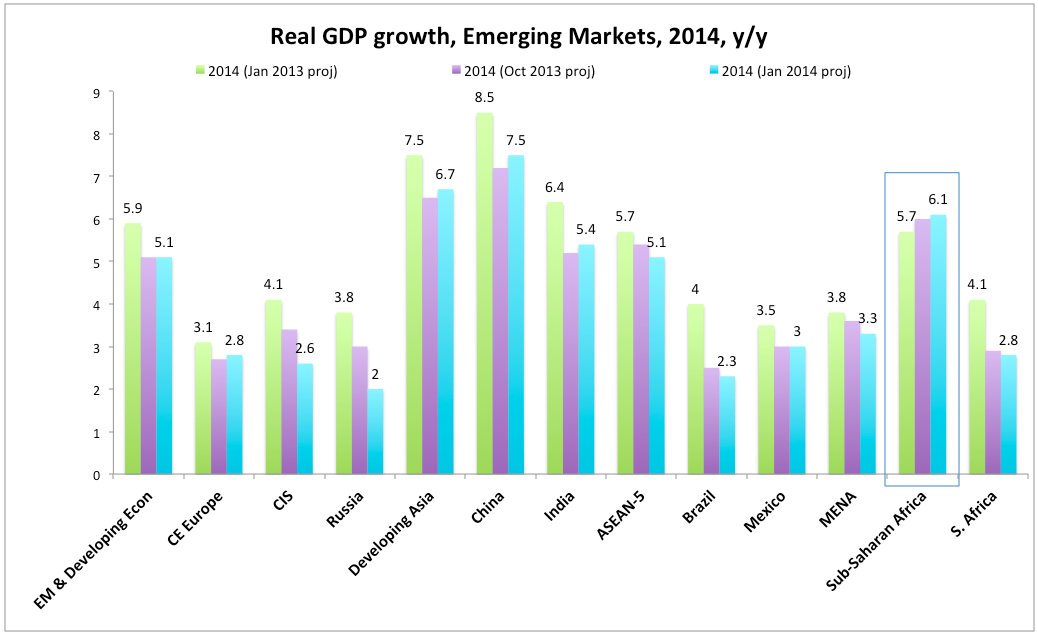 With exception of Sub-Saharan Africa, all other major emerging and developing economies and regions have been downgraded in January 2014 forecast compared to January 2013 forecast.

When it comes to 2015 forecasts: there are more upgrades to growth forecasts: 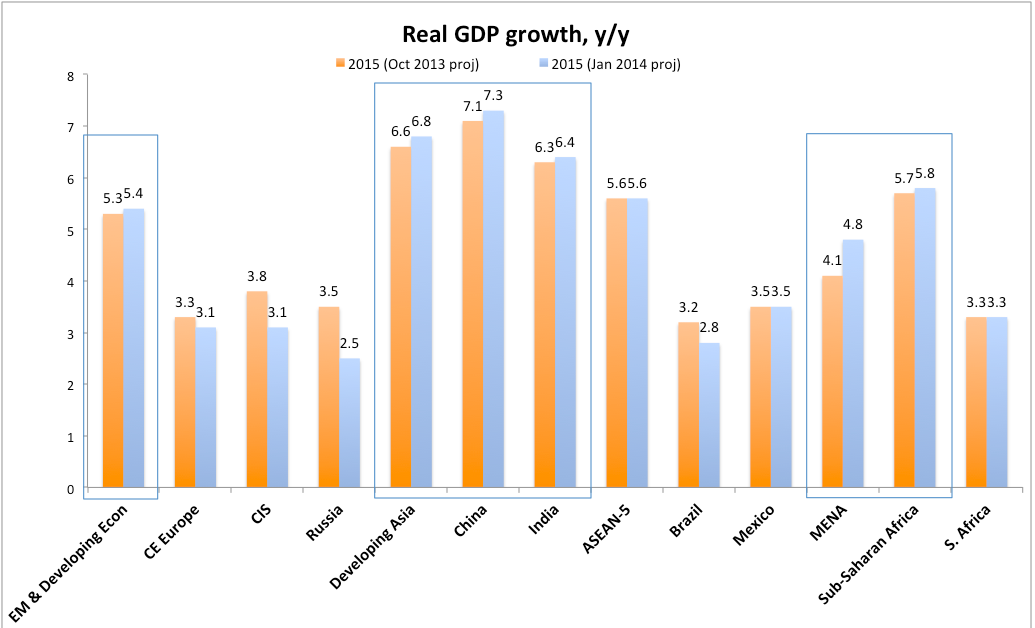 But none - save for Developing Asia, China and MENA - are within statistically meaningful range.

The really devastating - the thesis of 'improved IMF outlook' - evidence comes from looking at the IMF forecast for Global Growth (controlling for FX rates): Summary of the above chart is simple and ugly:

And now, recall the 'salvation by trade' argument for Europe and Ireland? The 'exports-led recovery' story? Here are IMF latest forecasts for global trade volumes growth, and for imports by the advanced economies (AE) and emerging and developing markets (EM & developing): 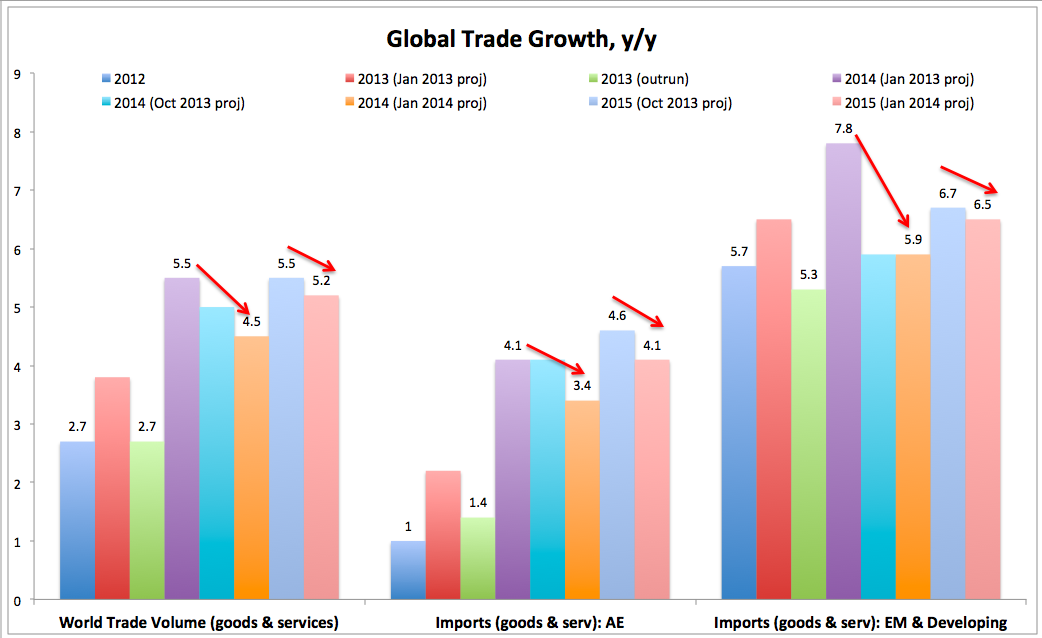 Summary of the above chart is also simple and ugly:
So basic question is: Who will be buying all the exports that are supposed to grow across all European states?.. Martians?

Posted by TrueEconomics at 4:45 PM