For some months now I've been meaning to post on the topic of the IBM's recent report on global development in Innovation markets, titled "Insatiable Innovation: From sporadic to systemic".

The paper is a sizeable response to the popular theory gaining ground that the world is past innovation capacity peak. I covered this topic on this blog (see for example http://trueeconomics.blogspot.ie/2012/08/2882012-challenging-constant-growth.html).

IBM folks, obviously disagree: "Is innovation dead? Numerous press reports seem to indicate so. A view is emerging that innovation is no longer the driver of growth it once was, as evidenced by a January 2013 cover article in The Economist. Pundits point to declining growth in global productivity as further proof that “The Big Idea” is a thing of the past (e.g., global per capita GDP 10-year CAGR, which topped 4 percent in the 1950s, fell to nearly 0.5 percent by 20102)."

A note of caution is worth putting forward here, IBM authors do not do literature analysis. This makes their paper weaker. They could have benefited from directly challenging the evidence and analysis presented in the likes of Gordon's work on the topic, rather than dismissively waving arms at it.

But what IBM authors do do is solid review of their own experience coming from the real economy and own IBV studies:

"Our view, based on analysis of past IBM Global CEO studies, as well as practical, hands-on experience, is that innovation is far from dead. It is, instead, thriving among those outperforming companies that apply product, operational and business model innovation to truly differentiate themselves from their competition. The ability to generate, control and exploit innovation can become a major source of strategic advantage and economic benefit, as demonstrated by the growth in value of those companies deemed “most innovative"."

This is not the evidence that can undermine the core thesis put forward by Gordon, but rather an argument that incremental innovation is alive and well.

Interestingly, the evidence presented by the paper seems to reflect well on the thesis of slowdown in revolutionary innovation and the diminishing returns to innovation. At the top level, here's what IBM are saying: "Innovation has been constantly evolving in its complexity and impact. Beginning with the industrial revolution in the Nineteenth Century and continuing through one technological milestone after another, economic activity has become more global, opening up new markets, new businesses and new business models (see Figure below). These models have evolved to the extent that, in today’s age of “universal customization,” customers are empowered to affect product attributes in real-time, with products and services becoming hypercustomized to meet the needs of individual customers." 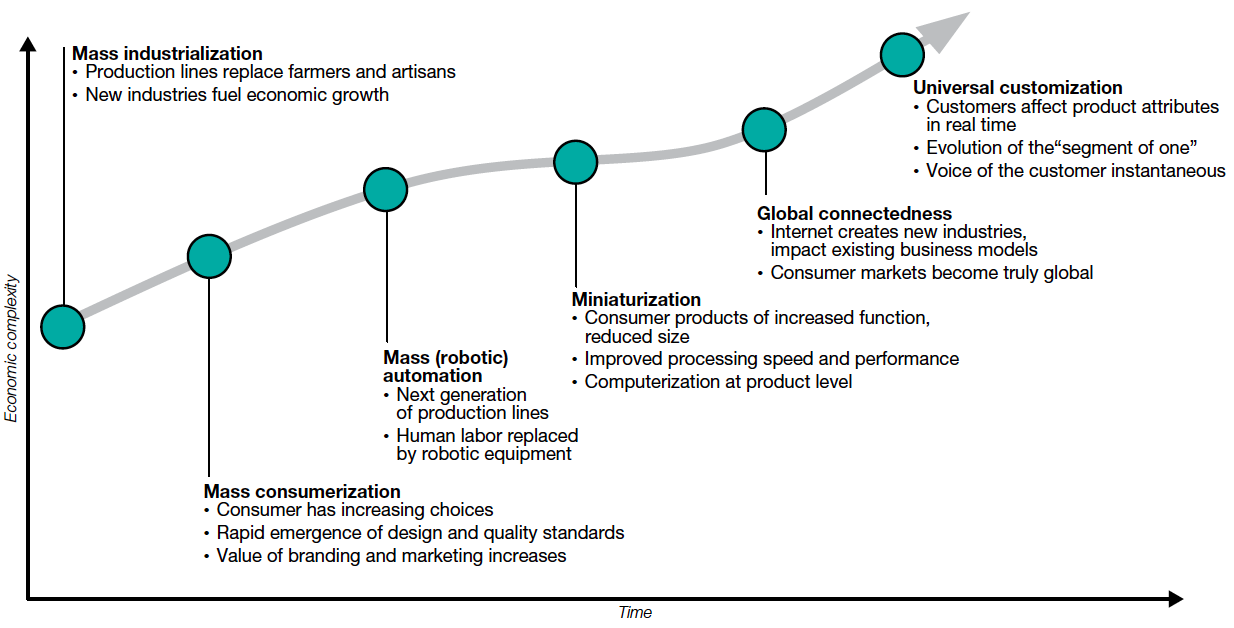 Wait, but this is exactly what the thesis of diminishing returns to innovation is about. As returns are reduced, complexity (and associated costs) rise. The chart above, perhaps inadvertently, but nonetheless correctly, shows that acceleration in economic returns to technology from the current plateau can only happen if/when we move to Universal Customisation. This is fine, except we are not yet there. Thus IBM top-level view that innovation is about to raise the gear of productivity growth is reliant on assuming that what we envision already occurred. It has not. Hypercustomised has not yet met any of the needs of individual consumers and we have no idea when it will do so.


"Growing complexity has intensified competition, providing an ever-greater impetus for:


Let me discuss couple of points, not subtracting from the graph, but rather adding to the picture of complexity in innovation it attempts to capture.

While at the first stage of Mass Industrialization, production lines started to replace farmers and artisans and new industries fueled economic growth, in more individualised world, empowered by what IBM terms "Mass (robotic)automation", Miniaturization and subsequently Universal Customization do not only lead to the increased functionality within a reduced size, improved speeds and performance and computerisation, but also to re-introduction of atomistic / artisan producers back into demand chain.

The reasons for this are two-fold:


Universal Customisation, thus, is a stage where artisans, atomistic designers, consumers-producers evolve to regain markets from corporate, vertical structures of command and control.

Or put differently, unless there are some yet-to-be-mapped breakthroughs in a number of areas, the age of Big Innovation is eclipsing. Gordon's thesis still stands...
Posted by TrueEconomics at 8:00 PM