The first post of the series covering 2012 National Accounts looked at the headline numbers for real GDP growth.

The second post covered sectoral weights in GNP and our GDP/GNP gap.

Overall, there are two main themes in rebalancing of the economy that showed up in data so far:
1) Increasing share of MNCs activity in GDP (and temporarily GNP), which means that the official figures for the National Accounts now even more overestimate the real economic activity in the country; and
2) Long-term falling out of Agriculture, Forestry & Fishing and Construction sectors from the economy, with Public Administration & Defence clearly showing signs of contraction, albeit at the rate that is, so far, trailing contraction in overall economy over the period 2003-2012.

In this post, let's take a look at the opportunity cost of the crisis.

Recall that relative to peak, Irish GDP is down 5.97% as of the end of 2012 and GNP is down 8.08% despite 'two years of consecutive growth' the Government is so keen on emphasising.

Also recall that 1980-2011 average growth rates in constant prices terms were 3.58% per annum, whilst IMF forecasts consistent structural or potential growth rate is currently around 2%. Using 2% figure we can, therefore, estimate the opportunity cost of the current crisis as losses to GDP and GNP arising from the growth foregone during the crisis. Chart below illustrates: 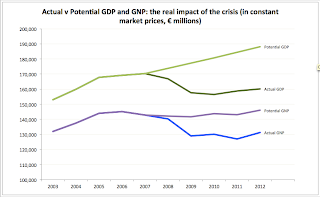 The grand total in opportunity cost due to the crisis (note, this is not an exercise in 'blaming the Government' or providing any estimate of real or actual losses, but rather an estimate of the opportunity cost of the crisis) is:
-- EUR104.5bn of cumulated foregone GDP for 2008-2012 or per-capita EUR22,823;
-- EUR58.8bn of cumulated foregone GNP for 2008-2012 or EUR12,828 per capita

What does this mean? Aside from the massive opportunity cost of the crisis, we have a rather revealing figure on foregone tax receipts. The figure clearly suggests that even were economic activity running at the 2% growth rate since 2007 without the crisis, re-alignment of economic activity away from domestic sectors toward MNCs-dominated activities and toward MNCs-dominated services activities in particular would still result in unsustainable deficits and would still required some sort of a fiscal adjustment, thanks to our taxation system that is extremely unbalanced when it comes to supporting MNCs-focused activities.
Posted by TrueEconomics at 10:49 AM