This is the third post on today's release by the IMF of the 2013 Financial System Stability Assessment Report for European Union report.


The first post - summarising top-line conclusion from the Technical Note on Progress with Bank Restructuring and Resolution in Europe is available here: http://trueeconomics.blogspot.ie/2013/03/1532013-imf-assessment-of-euro-area.html

The second post dealt with the Technical Note coverage of the Non-Performing Loans issues: http://trueeconomics.blogspot.ie/2013/03/1532013-imf-assessment-of-euro-area_15.html

This note is focusing on the Technical Note on Financial Integration and Fragmentation in the European Union.


Let's start with a fascinating chart showing the sources of financing for the real economy in the EU compared to the US: 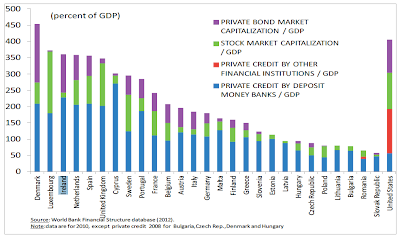 The scary bit here is the overall significant imbalances built in the system of financing in the EA17, compared to Denmark, and to the US:


And as chart below shows, euro area is also suffering from extreme over-concentration of the banking credit markets in the hands of the 'globally systemically important banks' (G-SIBs): 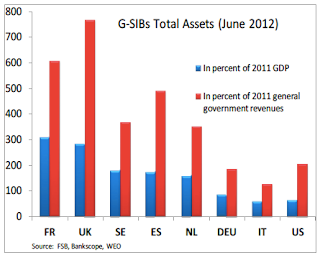 Per IMF: "The main EU banking systems are dominated by a set of globally systemically important banks (G-SIBs). These European G-SIBs have grown in size and importance and are highly interconnected with the rest of the global financial system (see Annex 1). Their assets more than tripled since 2000, amounting to US $27 trillion in 2010. As key players in global derivatives and cross-border interbank markets, they are also among the most interconnected GSIBs. European G-SIBs tend to be larger and more leveraged than their peers. In particular, they are very large relative to home country GDP, and in many EU countries, their size may dwarf the capacity of the home government to raise revenues."

Per footnote, this over-concentration is driven by the legacy models of banking in the euro area: "In part this is because European banks tend to follow the universal banking model, which combines a range of retail, corporate, and investment banking activities under one roof. There are some accounting differences that would make the balance sheets of the IFRS-reporting banks appear more “inflated” than the balance sheets of banks reporting under the U.S. GAAP (e.g., netting of derivative and other trading items is only rarely possible under IFRS, but netting is applied whenever counterparty netting agreements are in place under U.S. GAAP)."

Not surprisingly, banking sector stress directly links to the real economy and even more so to the sovereign positions: 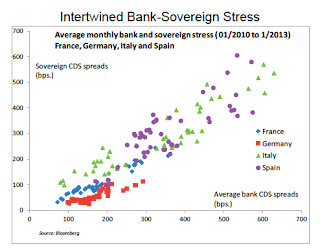 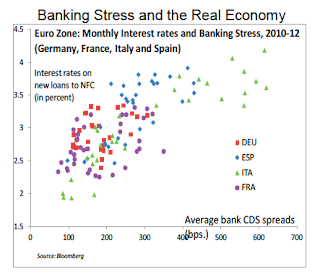 And, within the real economy, the crisis is hitting the hardest the SMEs: "The deleveraging process raises concerns about a credit crunch that would particularly affect SMEs. SMEs in peripheral Europe are particularly hard hit by the deleveraging process, as deposit outflows and capital shortages at banks limit the availability and raise the cost of bank loans. Data from the European Commission and European Central Bank Survey on the Access to Finance of SMEs show that the availability of external finance from banks has decreased since 2009 while the demand for external finance has increased.

"However, there is much cross-country variation, with the availability of external finance having deteriorated markedly since 2009 in Greece and Ireland and having remained fairly stable in countries like Finland and Germany. Regression analysis suggests that the deterioration in the supply of credit to SMEs is partly driven by the financial dis-integration process, as measured by the decline in cross-border BIS claims."

Which, of course, is not surprising - Big Banks Dominance = Closer Links to the Governments and Big Business via the Social Partnership / Corporatist models for governance. 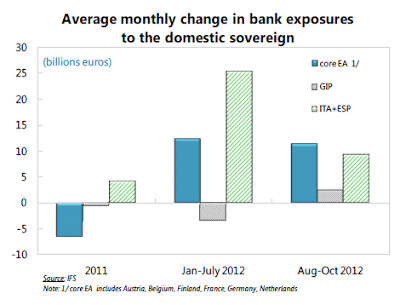 So, great stuff, Messr Kenny & Noonan - Irish banks (duopoly-modeled super-concentration with above average links to sovereigns and some of the most aggressive delveraging plans on the books within the EA17) offer as much hope of restarting lending to SMEs as that of sustaining viable rice growing industry in Sahara.


The next post will continue with my analysis of the IMF report and technical notes. Stay tuned for more later tonight.

Posted by TrueEconomics at 5:01 PM