This is the second post on today's release by the IMF of the 2013 Financial System Stability Assessment Report for European Union report.

The first post - summarising top-line conclusion from the Technical Note on Progress with Bank Restructuring and Resolution in Europe is available here:

Some beef on the Non-Performing Loans (NPLs):

"NPLs in EU banks continue to rise, outpacing loan growth (Figure 4). Since 2007, loans to the economy have decreased by 3 percent while NPLs increased by almost 150 percent, i.e., €308 billion in absolute terms. And, this trend shows no sign of reversal, reflecting the continued macro deterioration in parts of the EU and the absence of restructuring."

Euro area periphery is worst-hit, for obvious reasons: "NPLs across EU banks differ largely, with those in the “peripheral” countries (Greece, Ireland, Italy, Portugal and Spain) witnessing the largest increases. For instance, from December 2007 to June 2012, the NPL ratio for Italy increased by 2.5 times, while in Spain, the increase was seven times (Figure 5). Ireland stands out with average NPLs of around 30 percent, followed by Hungary and Greece. However, definitions in this area remain non-harmonized and impair comparability across the EU". 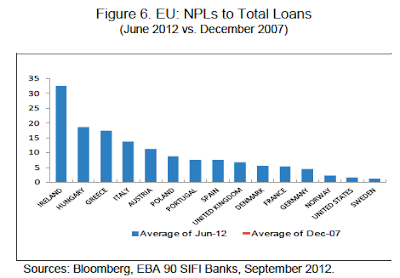 Now, note that 'turned-the-corner' Ireland is in the league of its own when it comes to NPLs ratio to total loans. Taken to the average ratio of total loans to GDP, Irish NPLs must be absolutely stratospheric.


And now, onto IMF view of the NPL resolution processes in the euro area (again, italics are mine and all quotes are directly from the IMF note):

"Borrower restructuring needs to be facilitated, with legal hurdles lifted. The legal framework should facilitate the restructuring of NPLs and maximize asset recovery. In several EU countries, including Italy, Greece and Portugal, the IMF is involved in bankruptcy/insolvency law reform, including by introducing fast track restructuring tools and out-of-court restructuring process. For instance, repossession of the collateral backing a retail mortgage may take several years in Italy versus few months in Scandinavia and United Kingdom. The asset recovery process is also very prolonged in many EEE countries."

[Do note absence of IMF input in the case of Ireland and that is a general gist of the Note - it simply passes no assessment of the Irish personal insolvency regime 'reforms', which is strange given the prominence of these reforms and the fact that these are the first comprehensive reforms in the euro area periphery. Personally, I read this lack of analysis as the IMF reluctance to endorse the Irish Government approach to the NPLs resolution when it relates to mortgages.]

[Note the IMF emphasis on rehabilitating viable borrowers AND providing the exit for non-viable borrowers. These twin objectives strike contrast with the Irish Government approach to resolving the personal insolvencies and mortgages crises. Instead of rehabilitating viable borrowers, the Irish Government is pursuing an approach of giving the banks full power to avoid any writedowns of the loans, even when such writedowns can define the difference between rehabilitation and insolvency. When it comes to providing exit for non-viable borrowers, the Irish Government has adopted the approach of reforming the personal insolvency regime from 12 years bankruptcy duration to 3 years, but then extended the process of availing of the bankruptcy from few months to up to 3 years. The pre-bankruptcy period of up to 3 years under the new regime is a period during which the banks have full power to extract all resources out of the households with little protection for the household, in contrast with the previous bankruptcy regime. Thus, in terms of life-cycle financial health, Irish households going through the new reformed personal insolvency process are unlikely to gain any meaningful relief compared to the previous regime.]

"Active management of NPLs is needed. In principle, NPLs can either be:

IMF also notes that: "The European Banking Coordination “Vienna” Initiative (2012) in a working group focused on NPL issues in Central, Eastern and Southeastern Europe. Recommendations, among others, focused on establishing a conducive legal framework for NPL resolution, removing tax impediments and regulatory obstacles, as well as enabling out-of-court settlements."


Stay tuned for the third and subsequent posts covering other technical notes released by the IMF.

Posted by TrueEconomics at 4:23 PM