So the reports are that Cyprus has a Plan B. And the outlines of the Plan - filtering through yesterday - are quite delusional.

The Plan consists of 3 main bits:

1. Split Laiki bank (see below) into a good and a bad bank. The 'bad' bank will take on deposits of over 100K and deposits under 100K (guaranteed by the State) will be shifted into 'good' bank. Other banks will be recapitalised but there are no specific as to how, when or to what levels of capital. This stage of the Plan aims to reduce the recapitalisation costs by about €2.3bn. The problems with this stage are massive, however. First: smaller depositors are more likely to run on the bank as they are less likely to have termed deposits and as their withdrawals (even under capital controls to be imposed - see below) will be less restricted than for larger depositors. In other words, the Plan B is likely to reduce stability of deposits and funding in the resulting 'good' bank. Second: while Cypriot banking system losses are currently crystallised, reducing uncertainty for any recapitalization, there is no guarantee that depositors flight will not undermine their balance sheets beyond capital injections repair. Thirdly: the new 'good' bank will have a balance sheet (again, see table below) saddled with massive exposure to ELA & ECB funding at ca 40% of the total liabilities. If associated assets move along with larger depositors, it is likely that ECB funding ratio to Assets is going to be close to 50%. How on earth can this be called a 'good' bank beats me.

2. Step two in the delirious process of Plan B repairs of the Cypriot banking system will be the creation of a sovereign wealth fund backed by state, church, central bank and pension funds 'assets'. Even 'future gas revenues' are thrown into the pot. Put simply, the fund will be a direct raid on state pension funds, state properties and enterprises and gold reserves. It will also contain a direct link to the collective psychosis induced by the crisis - the pipe dream of Cypriot 'Saudi Arabia of the Mediterranean' Republic. Honestly, folks, this crisis has taught us one thing: the quantity of hope-for oil & gas reserves in the country is directly proportional to the degree of economic / financial / fiscal insolvency of the nation. So, having set up a bogus and bizarre fund (with hodgepodge of assets and a rich dose of 'dreamin in the night' claims to assets) the state will issue 6-year bonds against these 'assets' to raise some €2.5bn. Now, what idiot is going to voluntarily buy into this fund is quite unclear at this stage, but presumably, with bond yields set at crippling levels, the fund will find some ready buyers.

3. Step 3: the remaining shortfall of €1bn is to be covered through a small deposit levy on deposits above 100K. 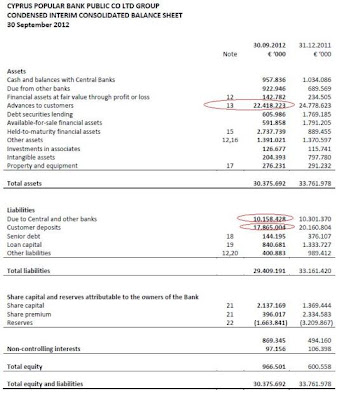 The question is whether this plan, even if acceptable to the EU and ECB, will prevent or even restrict the deposits flight once the Cypriot banking system opens up. The EU Commission is working with Cypriot Government on developing capital controls to stem outflow of funds. But there are serious questions as to whether such capital controls can be imposed in the country that is part of the common market.

Another pesky problem is whether the bonds issued by the fund in Step 2 above will count toward Government debt. Presumably, EU can allow any sort of fudge to be created (e.g. Nama SPV in Ireland) to avoid such recognition. If not, then whole Plan B is a random flop of a dead whale beached on Cypriot shores…

Third pesky issue is what happens if the Fund goes bust. With pension funds committed to it, will the Cypriot state simply default on all of its pensions obligations? deport its pensioners to Northern Cyprus? whack the remaining (I doubt there will be any) Russian 'oligarchs' once again? or invade Switzerland? The Cypriot Government attempted to dress up the Plan B as the means to avoiding hitting small savers and ordinary people with the bank levy. It so far seems like risky leveraging of ordinary retirees and future retirees to plug the very same hole that would have been created in their budgets by the deposits levy.


Meanwhile, here's the question for those reading this blog in Ireland: According to the ESCB Statures Article 14.3, the Governing Council of ECB can make a determination to shut off liquidity assistance to the national banking system only on foot of a 2/3rd majority vote. The ECB Council did announce such a move for Cyprus comes Monday. This implies that at least one peripheral state National Central Bank governor casted the vote against Cyprus. Would that have been our Patrick Honohan, one wonders, given the frequent propensity of Irish officials to kick other peripheral states in order to gain small favours from the EU/ECB?