In anticipation of the today's release (16:00 GMT) by the IMF of the 2013 Financial System Stability Assessment Report for European Union, Euromoney Country Risk analysts have published an interesting article Country Risk: Five years on, banks still inflict chronic pain on eurozone. Here are some of the very insightful charts - including an update on the previously covered banks stability scores (see here for January 2013 post and here for Q3 2012 data).

Let's start with the aforementioned chart on banks stability scores: 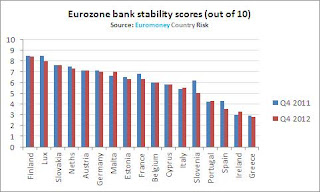 Pretty poor showing here for Ireland. Unlike the rest of the economy, we clearly have not 'decoupled' from the peripherals in terms of banking sector health and that is given:


We had the second weakest banking sector in the EZ throughout 2011-2012 and we still do. So much for the theory that Irish banks are 'lending into the economy' or 'have been repaired' and so much real support for the body of economic knowledge that says the deeper the debt overhang crisis, the longer and the deeper the required deleveraging crisis...


Now, something that shows that despite the consensus in Ireland and in the bonds markets, we are not quite due an upgrade as risks are still favouring continuation of the banking crisis (note, my view is that we are due an upgrade, but a single notch one, to reflect economic decoupling from the peripherals): 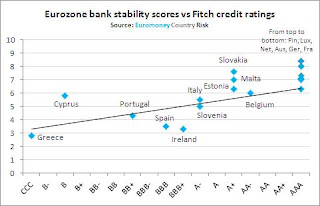 And the sovereign-banks links? Well, they are still there and still nasty for Ireland: 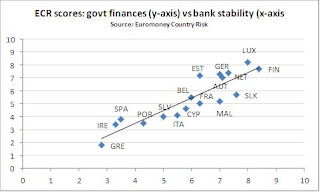 And here are few sobering words from the ECR:

"While some observers might still be convinced the worst of the banking crisis is over, the [Euromoney’s Country Risk] survey provides compelling evidence that bank stability risks are as concerning, if not worse now, for many European countries than at the beginning of last year, according to its contributing experts. More than five years on from the catastrophic events of 2007/08, the resolution of the region’s banking sector problems is still firmly at the top of policymakers’ to-do list, but with plans seemingly stalling, the implications of failing to act could prove critical."

Just in case you are in the 'green jersey' 'we've-turned-the-corner' camp, here's ECR quote putting Irish gains in the above scores into perspective:

"Across the eurozone, bank stability risks were unchanged last year in four countries – Austria, Belgium, Cyprus and Slovakia; with Cyprus the lowest of the group – and improved in four more: Malta, Italy, Ireland and Portugal. However, for the latter three, the rebounds were small and their scores remained at low levels of 5.5, 4.3 and 3.3 out of 10 respectively, illustrating heightened levels of risk."

So how bad are things in the euro periphery and in Ireland? Well:  "And the banks are just as problematic across the periphery. Taken as a whole, the seven riskiest eurozone countries (Greece, Portugal, Spain, Ireland, Italy, Cyprus and Slovenia) had an average bank stability score below that of most other regions, worse even than Mena or Latin America – see chart (below)." Keep in mind, that is for the average and Ireland is way worse than the average. 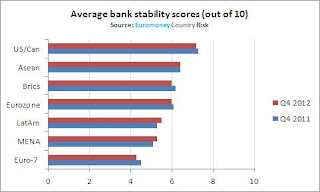 So next time you see Irish 'banks' adds claiming they are 'open for business' and 'doing our bit to help the economy' etc, just check these charts once again. They are, by all international comparatives, graveyard zombies, still holding this island at ransom.

Posted by TrueEconomics at 1:03 PM

Surely Irish banks performance is in line with expectations, given the state of the domestic economy. We are a country dependent on MNCs drawn by Ireland's tax system, with very few innovative ideas of our own... how can we expect our banks to heal in this environment, particularly in a period of still-falling house prices and household deleveraging?