New data on new vehicles licensed in Ireland in February is out and it makes for some depressing reading:

Note the precipitous decline in New Goods Vehicles - down 23% in February and down 21.4% in two months through February. This suggests that even if the "131" license plates are having an adverse effect on purchases, the investment cycle is not turning around still. Good Vehicles are a form of business investment in capital. They are also subject to set depreciation schedules, implying the need for replacement at some relatively stable rate over time. If economy was showing any signs of recovery, retail and wholesale trades, plus other domestic and exports-related activities would have translated in higher rate of capacity utilisation, including for goods vehicles. This, in turn, should translate in higher rates of replacement and new investment. So far - the data shows the opposite. 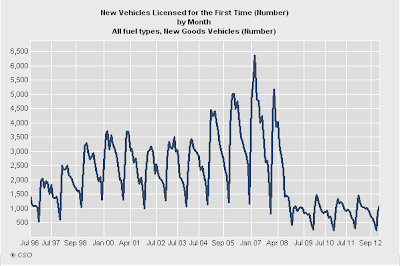 Here's the summary of historical data: 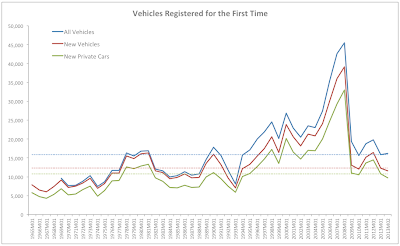 And the summary clearly shows that in terms of All Vehicles, we are now back to the levels of sales consistent with January- February 1994, in terms of New Vehicles sales and in terms of New Private cars sold to the level seen back in the end of 1993. Meanwhile, the State continues to rip off motorists at the ever increasing rate via fuel costs, registrations, VRT, VAT, licenses cost, etc.
Posted by TrueEconomics at 11:51 AM

The State as a holistic entity cannot afford to maintain the current vehicle stock at present.......what is it to do ?
Decrease taxes on this waste ?

However there is a problem with the FIRE sector charging huge insurance rates (this is simply a form of extraction in return for unproductive activity)
My father has had difficulty insuring a old car for occasional use simply because it is a multi decade old vehicle......it is in perfect nick.
Why should he buy a new one ?
Simply because the FIRE sector demands a income over everyone else ?
This is just another expression of the real wastage of resources within this fiefdom.

Are you trying to say there aren't enough 'white van man' chappies around and this is a really bad economic indicator? I never knew white van man could tell you so much.