Some interesting charts from the ECON review of the peripheral countries' structural reforms implementation during the crisis (full report is available here): 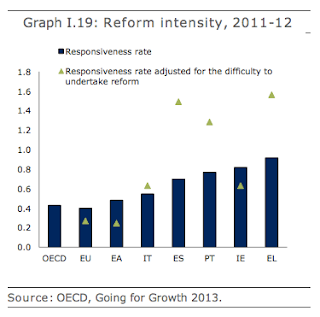 Note that by both measures, Ireland is not the 'best pupil in the class':

In part, the above is driven by the fact that we have started our reforms earlier than other countries, hence, for example, in terms of labour market changes, we have most of the gains in the Gross Value Added per hour worked peaking in 2009-2010. Also, notice that our performance relative to other peripherals has deteriorated in 2011-2012 and is expected to remain there in 2013. 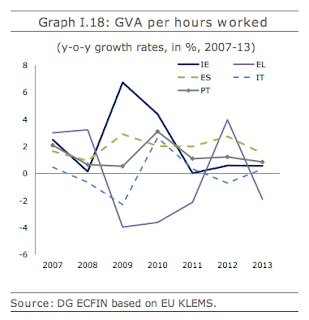 In part, however, the adjusted score is driven by structural differences in reforms adopted. And this implies that per OECD we are still ranked only fifth in the peripheral economies group when it comes to the adjusted scores over the broader period of 2009-2010 to 2011-2012:

Posted by TrueEconomics at 8:54 PM