With the new Government in place and with more urgency than ever before, Cyprus is heading for the last ditch effort to secure the bailout from the Troika.  However, all indications are there will be no agreement in March, pushing any potential deal closer to the June 3 when EUR1.415 billion of Government bonds come to maturity. The bonds amount to a massive 9.65% of the country GDP and are unlikely to be rolled over unless at a punitive yields.

Cyprus original request for the bailout dates back to June 2011, looking for up to EUR17bn (ca 100% of GDP) and the current foot-dragging from the EU is a clear signal of Frankfurt's and Brussels' conviction that the acute peripheral crisis is now over and there is little risk of contagion from Nicosia. If the full EUR17bn were granted, the bailout would push Cypriot Government debt to ca 145% of GDP, well ahead of the IMF-set sustainability threshold of 120%.

Furthermore, the EU policymakers clearly perceive Cypriot crisis to be distinct from other peripheral states while Cypriot banking system (the cause of the crisis) to be decoupled from the rest of the euro area. The former smacks of the usual euro area denialism, while the latter is probably closer to truth. Nonetheless, someone has to be concerned with sustainability of any debt in excess of 90-100% of GDP in an economy that is about to take a massive hit at the heart of its growth engine: banking and associated exportable services.

Cypriot banks hold assets valued at 8 times the country GDP (roughly EUR 120 billion worth of assets), with deposits of roughly EUR70 billion recorded prior to the recently started 'quiet' bank runs. Within last week alone Cyprus banks lost just over 2% of their deposits. Around 42-43% of these deposits belong to foreign (primarily British and Russian) residents.

The latter are now at the crosshair in the EU vs Cyprus war for bailing-in the depositors in insolvent Cypriot banks.

In 2012, there were some 60,000 Russian expatriates living in Cyprus, a country with the total population back in 2011 at 1.116 million. Russia was the second largest source of tourists inflows into Cyprus in 2011-2012 and Russia received FDI of USD12.3bn via Cyprus (although probably 99%+ of this was recycling of funds that originally left Russia for Cyprus). In 2011 Russia extended a EUR2.5 billion bilateral loan to Nicosia. Despite common theme in the press about Cypriot banking system being used for Russian tax evasion, Russia and Cyprus have signed and ratified the Protocol to the Double Taxation Treaty.

At the end of 2011, many, but not all and not even majority, of the non-Euro deposits in Cypriot banks originated from Russia - amounting to ca EUR18 billion (more than 100% of the Cypriot GDP), but just 20% of the total deposits in the country. Russians are also major holders of equities in BOC and CPB banks. These Russian deposits have declined since then. More ominously, the accounting of these deposits is somewhat dodgy. There are many conflicting figures out there.

Below is the table - courtesy of the Piraeus Bank - detailing the deposits structure in Cypriot banking system through early 2012: 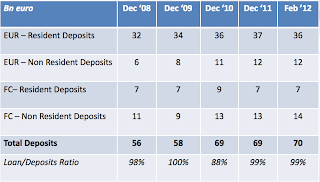 In contrast, Fitch (via International Herald Tribune) reported slightly different figures that are at odds with both above figures and the Min Fin claims (see below): 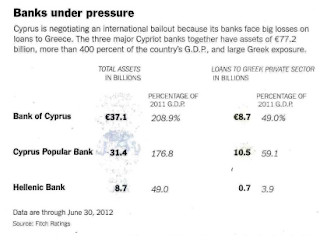 According to the Min Fin, as of end of 2012, Cyprus banks deposits remain around EUR70 billion and less than EUR30 billion of these are accounted for by foreign depositors, with Russian deposits standing around EUR15 billion. The problem is that all of the above figures include deposits in Cyprus-regulated pure Russian banks, such as division of VTB, for example, which are not going to be covered by the bailout or the haircuts.

A recent estimate by the Euromoney puts non-domiciled Russian deposits in Cyprus closer to 7-10% of total deposits or EUR5-7 billion.


Confusion aside, it is relatively clear that so-called Russian 'oligarchs' funds, while prominent in the overall deposits volumes, are neither the source of the Cypriot problems, nor a source for the sustainable solution to that problem. Even a 50% bail-in of these would not deliver (given the existent EUR100,000 guarantee on deposits, and the fact that large volumes of the Russian money is most likely held in the names of EU-registered entities) Cypriot system to health or even to contribute more than EUR2-2.5 billion to the EUR17-17.5 billion bailout.

Matters are worse, when it comes to bail-in of Russian depositors, when one considers the existent and growing links between the real economies of the two countries. In 2008, Cypriot economy gained EUR1.9 billion (11% of GDP) from tourism trade surplus. Inflows of Russian visitors to the island were up 55% in 2011 in y/y terms and they now represent the second largest source of tourism revenues after the UK (although Russian tourists account for only around 8-10% of all visitors to the island, as opposed to the UK tourists who accounted for closer to 50%). A loss of Russian tourism in the wake of any bail-in would be pretty hard to offset for Cyprus' economy left without the core pillar of International Financial Services. Country income from accounting and legal services amounted to ca EUR700 million or 4.0-4.1% of GDP in 2008, and much of that came from Russian residents, businesses, investors and depositors.

Overall, prior to the crisis, Russian business and individual activities in Cyprus contributed closer to EUR600-800 million in annual revenues to the economy, excluding taxes and wages. Applying some multipliers to that suggests overall GDP contribution from Russian-linked activities to Cypriot GDP of some EUR2 billion annually or up to 11.7% of the country GDP.

Posted by TrueEconomics at 8:05 PM

Russia should bail out Russian depositors in Cyprus banks, as Britain has, and recover the money by increasing the price of gas sold to Germany. The price rise could be a short "one off" levy.