Mortgages arrears data for private residences in Ireland for Q4 2012 was published today by the Central Bank of Ireland. Few surprises.

As expected, arrears rose. Unexpectedly, the rate of increase was much much slower than before in q/q terms and slower in y/y terms. As encouraging as this might sound, there are some points of concern outlined below. Here are some details of data dynamics first: 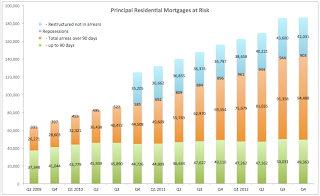 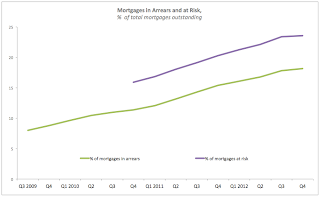 Good news: the rates of arrears build up have slowed down in Q 2012.

Bad news, getting worse slower is not the same as getting better. Especially given the deterioration tallied from 2009 through today.

Worrying side: impacts of property taxes, banks guarantee lift-off, repossessions orders regime change, and personal insolvency 'reforms' are not visible in the current latest data. All represent a threat of accelerating arrears once again.

Real news: just under 1/4 of Irish private residences-linked mortgages are now at risk of default, in arreas or defaulted and some 650,000-700,000 people are currently impacted by this crisis to the point of being unable to meet the original conditions of their mortgages.
Posted by TrueEconomics at 10:55 PM

you say debt been reclasified as private mortgage debt!! would this account for the slow down in new loans in arrears as the total number of loans rise???