A nice chart via Pictet (link) on the size of the banking sector in Cyprus and its dynamics since 2006: 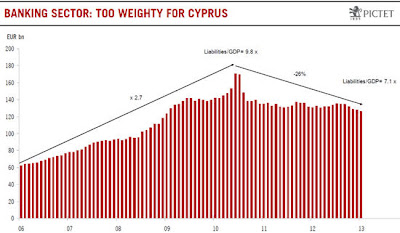 Now, do notice, reducing the above to 300-330% of GDP as required by the Troika in Plan A (and so far not disputed by the Cypriot Government) will imply lowering liabilities by EUR66.6 billion. Overall, banking margins in Cyprus are running at around 1.2% net of funding costs, we can roughly raise that to double to include wages and other costs spillovers, which implies that EUR66.6bn deleveraging of liabilities should take out of the Cypriot GDP somewhere around EUR1.5bn annually or 9% of GDP. Auxilliary services, e.g. legal, accounting and associated expatriate community benefits that arise in relation to international banking services being offered from Cyprus will also have to be scaled back. Assuming that these account for 50% of the margin returns to the economy, overall hit on Cypriot economy from deleveraging can be closer to EUR2.2bn annually or 12.7% of GDP.

Now, consider the loans package of EUR10 billion that Cyprus is set to receive if it manages to close the EUR5.8 billion gap. Absent banking sector deleveraging, this will push Cypriot Government debt/GDP ratio to over 140% of GDP. However, with reduction in GDP, the debt/GDP ratio (assuming to avoid timing considerations assumptions a one-off hit to GDP) will rise to 161%.

Now, recall that IMF and Troika 'sustainability' bound for debt/GDP ratio used to be 120%. We are now clearly beyond that absolutely abstract number even without the banking sector deleveraging. And let's take the path of debt/GDP ratio forecast by the IMF which would have seen - absent the 'rescue' package - debt/GDP ratio in Cyprus rising 106.1% of GDP by 2017. With the 'rescue' package and banking sector deleveraging, this can now be expected to rise to 174% of GDP in 2017 against Greek debt of 153% of GDP.

In short, the EU 'rescue' is going to simply wipe Cyprus off the map in economic terms. All debt 'sustainability' consideration are now out of the window. 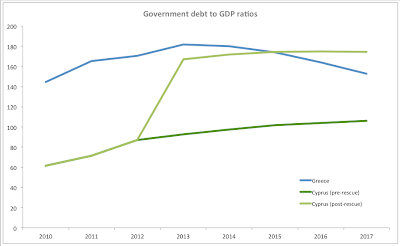 Of course, the above analysis is crude as it ignores:


Nonetheless, all in, there have to be some severe doubts as to viability of the Cypriot debt path under the Troika Plan A, let alone under the Cypriot Plan B.
Posted by TrueEconomics at 1:05 AM