To the 'turning around' reports from the Eastern Front ca 1943... err... 2013... per KBC Ireland/ESRI Consumer Sentiment Index, consumer sentiment in Ireland fell in February to 59.4 compared to January reading of blistering 64.2. The report gets 'serious' on dynamics: "The three-month moving average also decreased from 59.3 to 57.8. The index fell below the average for the last 12 months (61.9)."

Let me add some more dynamics to this. First, let's look at January 2012 data (since we do not have Retail Sales Indices for February yet):
KBC/ESRI Consumer Sentiment Index is about as good of a gauge for retail sector activity here as the elephants' herd gate tempo is of use for timing the Swan Lake pas de deux. If you don't believe me, here's a chart: 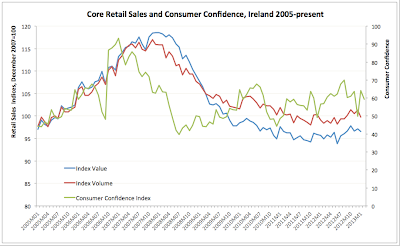 In the nutshell, consumer confidence hit the bottom in July 2008 and since then things were, apparently improving. So much so that by June 2012 Value of Retail sales has hit the absolute record low, whilst Volume of sales did same in October 2011. There is a gentle uptrend in consumer confidence since mid-2008 against a downtrend in both Volume and Value of core retail sales.

Taken on 3mo average basis (to cut down on volatility), Confidence indicator has virtually nothing to do with Retail Sales, except for high sounding press release comments from the experts: 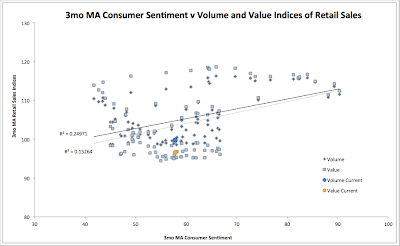 Per ESRI: "The promissory note deal was announced roughly half way through the survey period. The announcement of the deal would appear to have had some positive impact, with a preliminary analysis of responses showing an improvement in sentiment after the deal. We await the March results to see if the impact on sentiment is sustained.”

In addition, Austin Hughes, KBC Bank Ireland, noted that [comments are mine] “A disappointing aspect of the sentiment data for February was that the decline was broadly based. Consumer spending power remains under pressure and there is little to suggest a dramatic improvement in Irish economic circumstances that would cause a ‘feel good’ factor to emerge anytime soon. [A revelation of most profound nature]

"About the best that can be expected is a slow easing in the ‘fear factor’ that would encourage a gradual increase in spending. This may not be spectacular but it still represents significant progress. [What progress he might have in mind beats me, as Retail Sales figures continue to show little signs of reviving from already abysmally low levels]

"...The Irish consumer is seeing an improvement in ‘macro’ conditions across the economy but their personal finances remain under pressure. [In other words, we are in that ESRI & KBC-lauded 'exports-led recovery' boom, folks, where you and I get screwed, while MNCs get to report greater 'sales']

"It may be that some consumers had unrealistic expectations as to what a deal could achieve. [Did Government enthusiasm in over-selling the potential impact propelled enthusiasm of consumers for the 'deal'?]

"More generally, it remains the case that consumers face significant further austerity in the next two Budgets. [Doh! We'd be discovering new Solar Systems, next]

"The deal may ease the pain somewhat but it doesn’t entirely remove it. So, we shouldn’t expect a surge in confidence. That said, the fragile situation of Irish consumers means they are sensitised to bad news. So, failure to reach a deal could have seen sentiment deteriorate quite sharply.” [In other words, we were saved from an apocalyptic collapse of consumer confidence by the wisdom and the heroic efforts of the Government... and ATMs are still working!]

Irony has it, the same 'positive newsflow' that went along with the index slide this time around also supported (according to the authors) index surge in January - see here for January release comments: http://www.kbc.ie/media/CSI.Jan20131.pdf Who says you can't have a cake and eat it at the same time?

I don't know what to do - laugh or cry... cup of coffee is needed, however, as much as some serious improvements in survey to bring it closer to reality on the ground. It is needed because:
Posted by TrueEconomics at 1:40 PM