BlackRock Investment Institute has released the latest results from its Economic Cycle Survey for EMEA and North America & Western Europe.

Before looking at the results, note:


So core results for North America and Western Europe regions: 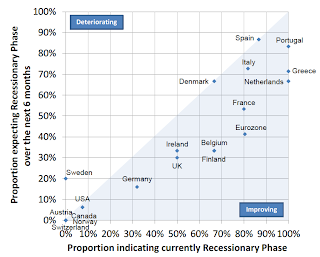 In effect, little change from the previous surveys for Ireland, which remains solidly decoupled in terms of economists consensus from the peripheral states (the latter are all clustered in the upper RHS corner, corresponding to both high expectations of continued recession and current indicator of the present recession). In the case of Ireland, it is obviously very hard to tell whether or not Ireland is currently in a recession. Both GDP and GNP changes q/q and y/y do not warrant official designation of a recession, but nonetheless the economy is running at well below its potential capacity. 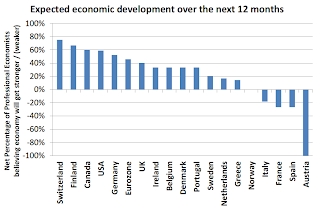 Per chart above, it is clear that despite the Eurostat projections for 2013 growth, Ireland does not lead the Euro Area in terms of forward expectations for economic growth when it comes to the economists' assessment.

Now on to EMEA results: 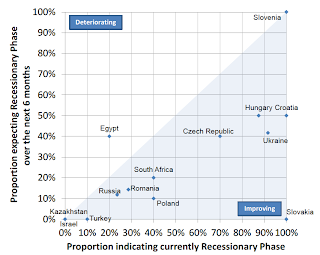 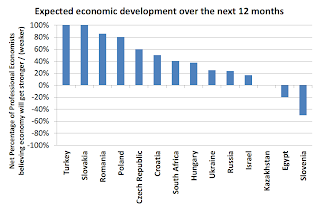 Pretty much predictable weakening of Russian growth for 2013 is reflected in the above. Two other interesting points:

Note: here are the tables detailing the extent of the survey coverage depth:

Posted by TrueEconomics at 4:42 PM